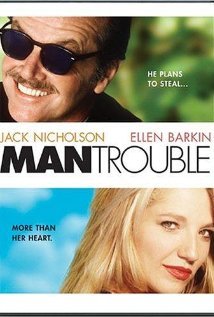 In MAN TROUBLE, the sleazy owner of an attack dog business (Jack Nicholson) commits adultery with a successful opera singer (Ellen Barkin). Together, they unravel a crime. Despite its popular co-stars, the movie suffers from a lackluster plot, a lack of credibility, violence, perversion, and immorality.

MAN TROUBLE begins with Joan Spruance (Ellen Barkin), a opera singer-divorcee, finding her apartment ransacked and obscene messages on her answering machine. Therefore, Joan purchases an attack dog from Harry Bliss (Jack Nicholson), an sleazy businessman. With creditors stalking him and his marriage to a Japanese woman on the rocks, Harry contemplates having an affair. After drinking too much Saki, Joan and Harry end up in bed together. The plot thickens as Joan’s sister, Andy, is kidnapped after writing a novel about her crooked ex-husband.

MAN TROUBLE is consistently problematic–an adult comedy that falls flat on its silly face. Despite its popular co-stars, the movie suffers from a lackluster plot, a lack of credibility, violence, perversion, and immorality. Even by Hollywood standards, the attraction between Joan and Harry seems unrealistic and contrived. Only in the movies does a wealthy, successful opera singer become involved with a dead-end, low-life who has no morals or redeeming qualities. When he is offered $15,000 to double-cross Joan’s efforts to help her sister, he can’t even turn down the money. In turn, Joan gives in to Harry’s advances simply because “Well, I want you to like me.” The movie’s only redemptive quality is the opera music.