"Fun-Loving, Talking Animals (and Their Humans)" 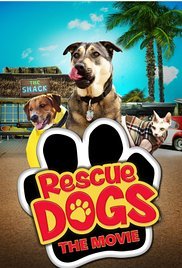 In the family movie, RESCUE DOGS, Tracy and his dog, Charger, work to save their beachfront restaurant from an evil takeover. A cast of pets and wildlife steal the show, as they narrate and intervene to nudge “their humans” to “be awesome.” Tracy fights a nerdy banker, Harold, to keep his grandfather’s colorful Beach Shack in business. Meanwhile, Harold reports to sinister businessman, Mr. “E-Vaul.” Also, Tracy stumbles across Bridgette and falls head over heels (almost literally) as he pretends to be an acclaimed dancer to win her affection. When Bridgette learns Tracy lied, she’s angry, but later forgives and helps him. Everyone learns that, by working together to do the right thing, good things can come to fruition.

RESCUE DOGS serves up some biblical, redemptive values, including kindness, mercy, forgiveness, and more, slightly diminished by comical New Age allusions. A satisfying diversion, it’s filled with likable characters. Older children and adults will understand some toilet humor and innuendos to varying degrees. For the most part, though, RESCUE DOGS is a fairly tame story for animal lovers of all ages.

(BB, C, Pa, FR, Acap, Cap, L, V, A, M) Strong moral worldview extolling kindness, forgiveness, mercy, and truthfulness, but mitigated slightly by a few brief New Age-looking gags, a quick yoga scene (a “Bikram Yoga” allusion is stated), a mention of “fate,” and a humorous line about having a “7th Sense” (but the latter is refuted), plus villain is a business owner, but so is the protagonist; two word plays that older children might understand as pseudo-profanities, a few instances of immature humor (e.g., passing gas, and a man’s clothed buttocks protruding toward camera for comedic effect), a few light innuendos in voice-over; light violence includes men accidentally burn hands on appliance, and an implication that man falls without injury from several feet above street-level; brief suggestive dancing, “Shake your booty” printed on a screen briefly; woman wears inappropriately-tight and raggedly-buttoned blouse, woman wears dancer sweatshirt off-shoulder over bikini-like top, upper male nudity briefly on a dancer; a tasteful scene with wine; no smoking or drugs; and it’s mentioned that a character should “destroy” an enemy, one act of revenge against an adversary, and comical secondary characters who sometimes act strange (transcendental/mystical or slightly psychotic, but who are heroic and very supportive to others).

In the family movie RESCUE DOGS, Tracy is a busy, balanced entrepreneur, wrapping burritos in his bright turquoise beachside bistro. His trusty dog, Charger, is always right there by his side…even in the kitchen! That is, until a greedy nemesis forces the two apart and tries to take over the restaurant’s property.

RESCUE DOGS’ cast of characters includes several animals, including wildlife, in Southern California settings. The audience can hear them, while they show off wildly different personalities with witty humor. A couple sandpiper birds narrate every so often to summarize for children along the way.

After a fun animated opening sequence, the story begins with Tracy heading to his bistro, the Beach Shack. There, he greets Sam, a warm, but slightly crazed, surfer bum.

As a new day dawns at the Beach Shack, a nefarious and nerdy banker, Harold, makes waves. Harold’s boss, who owns the “E-Vaul Corp.,” wants to turn the area into an 18-hole golf resort. Cash-strapped, Tracy has no choice but to come up with his rent in just four days, or else!

While hunting for a solution, Tracy falls for a pretty lady named Bridgette. However, he gets entangled in a comical case of mistaken identity, leaving Bridgette to think Tracy is really an acclaimed dancer named “Fabiolo.” When she learns that was a lie, she doesn’t know what to believe. After awhile, Bridgette forgives him and even helps him complete a mission.

Along for the ride is Harper, Tracy’s very silly brother. Harper can sometimes “hear” his dog, Callie, talk, though most other characters don’t have that gift. Even though he’s a grown-up, childlike Harper believes he’s a real treasure hunter.

A pretty spacey dude, Harper also thinks he sees “clues” or signs in ordinary places… but, he’s wrong (most of the time). He also forgets his shoes a lot, breaks garden gnomes and thinks up wacky recipes for the restaurant. Harper is actually very selfless, and loves helping his brother just “be awesome” and enjoy cooking, not stressing.

Lurking in the background, the owner of “E-Vaul” is trying to destroy Tracy’s Beach Shack. This bad guy, by the way, has an oh-so-stereotypical “evil” kitty, but Mr. E-Vaul is so out-of-touch that he can’t “hear” his nice feline’s voice when he protests his new name, “Nightmare.” The pet, who says he prefers to be called, “Nightcat,” eventually helps Charger, Tracy’s dog, in a plot to foil his owner’s plans.

Speaking of pets, Bridgette has a hamster named “Hambone,” whom she rescued from a lab. Hambone sounds a lot like the A-Team’s Mr. T. The lovable, slightly irascible, furball obsessively “works out” all day by scrambling through his habitat.

In the end, RESCUE DOGS comes to a grand finale with good versus “E-Vaul.” Though not perfect, the movie emphasizes several Judeo-Christian values, including charity, kindness, mercy, truthfulness, faithfulness, forgiveness, and more. Despite brief toilet humor and comical New Age allusions, it’s a satisfying diversion, filled with bright, likable characters.

Behind the camera, RESCUE DOGS lives up to its name because four pet characters are played by actual rescue animals. The producers also have paired up with 25 rescue centers across America to help raise awareness while the movie hits theaters via limited release.