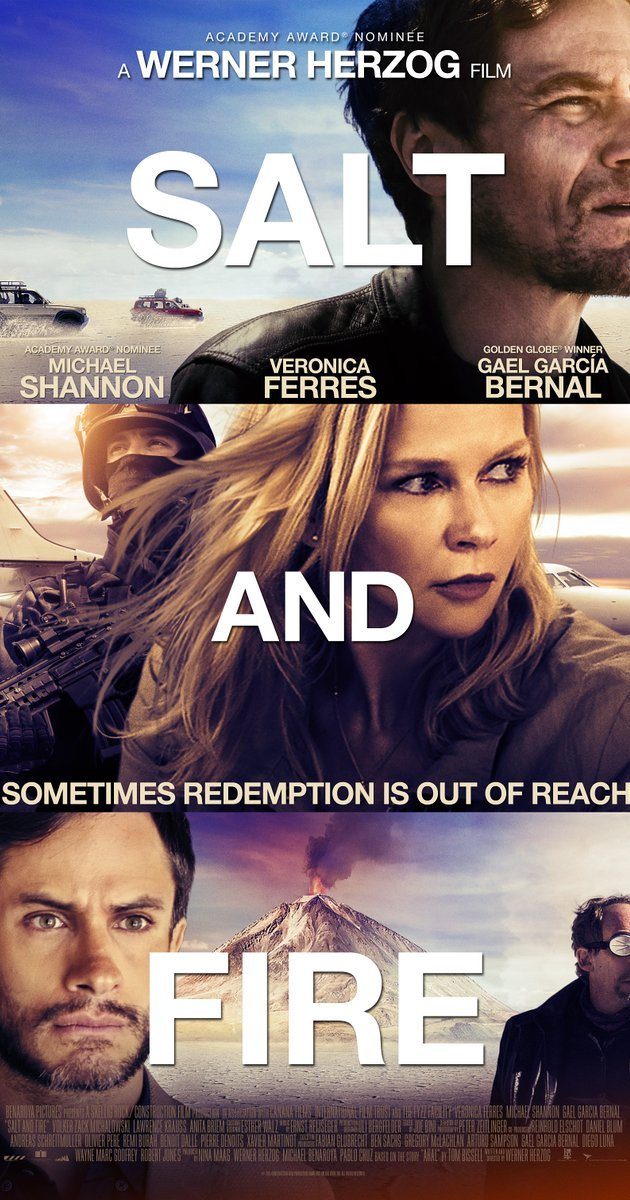 SALT AND FIRE is a disastrous disaster movie. Dr. Laura Sommerfeld, a world-renowned climate scientist, is kidnapped while leading two male scientists on a study of a global ecological catastrophe. Ferres and her male companions fly to South America to write a U.N. report on Diablo Blanco, the worst ecological catastrophe of modern times. They are kidnapped by the CEO of “The Consortium,” the company responsible for polluting Diablo Blanco. Will Laura escape and alert the world to the new environmental catastrophe? Who cares?

SALT AND FIRE contends that capitalism has destroyed South America’s pristine environment. It promotes the globalist idea that the United Nations has all the answers. Also, the villain expresses an occult belief in an unseen force that directs the whole world. At the same time, the movie’s poor performances and surreal dialogue make it unwatchable except for unintentional laughter. Due to its poor quality, needless swearing and potty humor, and overbearing political preaching, SALT AND FIRE is an abhorrent movie. Most moviegoers, not just media-wise families, will want to skip the dry and painful SALT AND FIRE.

(PaPaPa, PCPCPC, EEE, AcapAcapAcap, SoSoSo, O, B, C, L, VV, S, AA, M) Very strong, somewhat mixed pagan, politically correct, environmentalist, anti-capitalist, socialist message blames a global ecological disaster killing South Americans completely on one business, some mild occult content with one reference to the “prophecies” of Nostradamus, villain makes referenced to an unseen force that only children and animals can recognize, and two references to aliens, but also some mild use of biblical imagery as a parrot quotes a verse from the Bible, a picture of Christ being taken down from the Cross, carvings of angels are filmed, and a nun walks through an airport; two obscenities as characters needlessly use the f-word, as well as three scatological references to diarrhea; some moderate violence takes place in the early part of the movie, depicting punching, kicking, a head-butt, and hitting a man in the groin with a briefcase, one gunshot is fired into the air as a warning, three characters are blindfolded and held at gunpoint, there is a brief depiction of blood on a man's hands and windshield; two depictions of unwanted sexual advances as a man gropes a woman’s knee and clothed breast; no nudity; three characters are shown drinking alcohol, one is implied to be drunk; no smoking or drug references; and, one reference to drinking tea brewed from cocoa leaves for medicinal purposes and kidnapping.

SALT AND FIRE, possibly the worst movie of the year to date, stars German actress Veronica Ferres as Dr. Laura Sommerfeld, a world-renowned climate scientist who is kidnapped while leading two male scientists on a study of a global ecological catastrophe. The acting and dialogue are so bad they keep the movie’s message of capitalists destroying the globe from connecting with viewers.

Laura and her male companions (Gael Garcia Bernal and Volker Michalowski) fly to South America to write a U.N. report on Diablo Blanco, the worst ecological catastrophe of modern times. They are soon kidnapped by Matt Riley, the CEO of “The Consortium,” the company responsible for polluting the Diablo Blanco area for decades.

The movie is one of the worst movies of recent years, ranking alongside “Battlefield Earth” as a complete waste. The dialogue written by Director Werner Herzog is unnatural and sometimes completely meaningless. “The noblest place for man to die is the place he dies the deadest” is just one of many examples. Poor acting from the cast, especially Shannon (who’s showed streaks of brilliance in other movies) as the CEO and by real-life physicist Lawrence Krauss, render the movie unintentionally hilarious.

The writing is on the wall early, as the trio’s first encounter with their kidnappers in the airport rivals anything out of THE HAPPENING. They are soon flown to a secret location controlled by Riley, the CEO, where the male scientists are incapacitated with violent diarrhea. Then, for 50 minutes, Riley seems to have kidnapped Laura only so he will have someone to listen to his long philosophical rants about truth being an illusion  and how a mysterious force moves everything, but only children and animals know it. Later, Kass makes references to ways he could attract alien lifeforms.

Nearly an hour into the movie, viewers learn The Consortium’s business practices transformed the ground in a South African village into miles of salt plates growing so fast they may soon take over the earth. At the same time, lava is building up inside a volcano and, when it erupts, “we will disappear as a species.”

Riley and Kass then abandon the scientist on the spot. As they drive off, two blind native South American children holding stuffed animals appear. Although they speak no English, Laura learns their names, which happen to be the names of the last Incan rulers before the Spanish Conquest (the Incans reportedly enslaved many people before the Spaniards came, by the way).

Who are the two children? What does the CEO want? Will Laura ever escape and alert the world to the new environmental catastrophe before the world meets its end by salt or fire?

Many movies are built around an environmentalist, anti-capitalist, or politically correct message, but SALT AND FIRE is nothing else. It’s little more than an arthouse adaptation of Al Gore’s AN INCONVENIENT TRUTH.

There’s one redeeming shot, where the camera pans the salt plates growing across the earth’s surface before scanning the night sky. It’s visually arresting and conveys the immensity of the coming Salt Age. A few moments of Shannon’s closing speech, where he reveals the Big Secret behind the movie, are also effectively delivered. Otherwise, SALT AND FIRE is an environmentalist nightmare with no redeeming features, except the ability to provide unintentional laugh.