"Sensual Portrayal of a Wise but Prideful King" 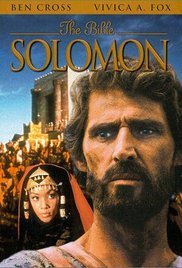 Based on the famous biblical king, SOLOMON introduces King Solomon as a young man, as his father, King David, nears death. Bathsheba, Solomon’s mother, is a strong, manipulative woman, who actively advises her son until he begins to marry. Under Solomon’s wise rule, Israel builds a great temple to God. However, later, Solomon often resists God’s ways, wedding several foreign women and treating the people too harshly. Though Solomon prays and receives wisdom as a special gift from God, he tricks himself to believe sophisticated lies.

At nearly three hours, SOLOMON could use an intermission, but the movie is constantly engaging. Ben Cross is very good as the wise but prideful king. The movie generally adheres to Solon’s story as told in the Bible, but there are some changes. Despite Solomon’s sins, the movie tells viewers the temple he built remained a place of worship for 360 years. That said, SOLOMON contains some violence, including a few battle scenes, brief nudity and some sensual material regarding Solomon’s many wives and concubines. Consequently, MOVIEGUIDE® advises strong caution for viewers, especially younger ones.

(BBB, Pa, Ab, VV, SS, NN, A, MM) Biblical account and worldview of King Solomon’s life and reign in Ancient Israel, also portraying pagan worship briefly in a few scenes, with some jaded philosophizing about God, and a leader goes his own way against God, and a wise advisor and God punishes him and his heirs, but movie notes at the end that the temple Solomon built for God remained a place of worship for 360 years; no obscenities or profanities, but some ungodly (philosophical) statements; light and strong violence includes battle scenes (one mildly bloody), men race chariots irresponsibly, man falls and is injured, sword held up to man’s neck threateningly (but he is released), man on horse shoves people ruthlessly and assaults man, man is stoned and stabbed to death; two brief steamy bedroom scenes include a slow scene of a man kissing a woman’s body, references to “lust,” “groin” and “buying” a woman mentioned in separate scenes, Solomon has many wives and “concubines,” polygamy, some scantily-clad young dancing women are given as a gift to a man, and another visual innuendo regarding sex; partial upper female nudity in one bedroom scene, images of a woman’s naked back, upper male nudity, scantily clad women, and rear male nudity during bathing scene; drinks poured for royalty may be implied as alcoholic; no smoking or drugs; and, woman manipulates kingdom and says she has authority, men discuss and devise treacherous plans against God, government and/or family members, leader and others worship false gods, prideful leader goes against God in word and deed but God punishes him and his heirs, some of whom also stray.

SOLOMON is a remastered television movie that vividly displays the complex character of biblical fame, King Solomon. The movie follows much of the Old Testament account starting in the book of 1st Kings. However, it feels like an exciting Hollywood drama, maintaining a constant flow of intrigue in a way that few adaptations achieve. That said, SOLOMON has some violence and sensual material requiring strong caution. Also, though the movie stays surprisingly close to most of the Old Testament accounts, it doesn’t follow them exactly.

The movie opens with one of its more graphic bedroom scenes: an extreme close-up of a man and woman passionately kissing, which lasts for more than 30 seconds. The context is later revealed as an older Solomon being with one of his many wives.

Jumping back in time, Solomon and his half-brother, young and immature bachelors, are competing in a chariot race. Foolishly moving too fast, Adonijah is thrown from his chariot. Seeking medical help, the brothers and their royal party meet a young woman, Abishag, and her persuasive father, Azarel. The beautiful and no-nonsense lady is recruited to help Solomon’s father, King David, who’s physically suffering in his old age.

Meanwhile, Adonijah conspires with Joab, an army commander, to gain his way to the throne after David’s passing. A sly Joab passionately believes Solomon is too weak to be king and spreads gossip to gain support for Adonijah. Adonijah eventually asks to marry Abishag, but Solomon sees beyond his ulterior motives and has him and Joab killed for attempted treason. Even after they fail to usurp the crown, tensions broil under the surface, however.

After solidifying his kingdom, Solomon goes on to marry again and again, and have several children. The movie portrays him being deeply in love with and being wedded to the Queen of Sheba, which is something that’s become a popular legend, but isn’t substantiated by Scripture.

The movie features Solomon building the famed temple, but it also shows his digression from righteous worship and toward paganism by allowing and giving credence to false idols. He defends his stance, saying that he’s studying the world and that he can benefit from learning about other gods. Though he prays and receives wisdom as a special gift from God, he mostly proceeds on a nuanced path, tricking himself to believe sophisticated lies, wandering further and further away from the truth.

King David’s famous wife, Bathsheba, garners much screen time as she advises her son Solomon in his transition to becoming Israel’s king. The movie shows Bathsheba at an older stage of life, as a middle-aged mother and grandmother, compared to the more familiar story of Bathsheba in her younger years.

At nearly three hours in length, SOLOMON could use an intermission, but the movie is constantly engaging. Ben Cross is very good as the wise but prideful king.

SOLOMON takes an interesting approach to biblical characters, trying to “humanize” them much more than people normally experience in sermons or Sunday School lessons. At one point, for instance, David says, “God’s own words trouble me.” Both he and Solomon seek to honor the Lord, but also act in their flesh. Thus, the characters are very nuanced, displaying both good and bad sides. This raises a question, what is the right amount of “humanity” to show in a biblical movie?

SOLOMON sticks close to the biblical text except for the insertion of the unbiblical romance between Solomon and the Queen of Sheba and a few other issues. In one sense, Solomon’s story is a tragedy. It’s the story of a king, given wisdom by God, who eventually strays from the path God sets before him. Thus, God punishes Solomon by removing half of Israel from Solomon’s kingly heirs. Also, the ending reminds viewers that, despite Solomon’s sins, the temple to God he built remained a place of worship for 360 years.

SOLOMON contains some violence, including a few battle scenes, a couple steamy bedroom scenes, brief nudity, and a scene where some scantily clad dancing women are given as a gift to a man. Consequently, MOVIEGUIDE® advises strong caution for viewers, especially younger ones.