"Jesus Has Paid the Debt" 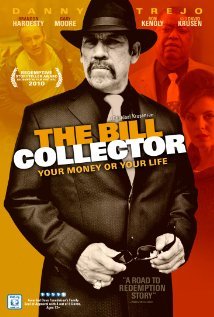 HE BILL COLLECTOR presents a sometimes entertaining, sometimes flawed road-to-redemption story reminiscent of Jesus’ parable about the dishonest manager in Luke 16:8. Lorenzo Adams’ fast paced lifestyle ends when loan shark Frankie Gutierrez calls in his debt and leaves gigantic Omar to monitor him. Lorenzo dishonestly replaces his co-workers with indigents from an inner city mission for an unpaid, two-week trial period in which they collect loans for pennies on the dollar while his boss is on vacation. The plan culminates in a scene where Lorenzo is ambushed in a gang-related shooting. The question is, Will Lorenzo find redemption?

THE BILL COLLECTOR presents an overt evangelistic Christian worldview. In spite of the threat of retribution hanging over Lorenzo, there is a lack of jeopardy at many places, and the predictable plot is overshadowed by a suspect ending. The comedy is often good and often just misplaced buffoonery. Too much of the acting is exaggerated. Not only is there brief violence, excessive alcohol, smoking, gambling, but the plot also revolves around the lead character lying and stealing. The movie is sometimes entertaining, however, contains some interesting characters and presents the Gospel message.

(CCC, BBB, V, S, AA, D, M) Very strong, evangelistic Christian worldview where multiple characters are saved and many scenes are set in an inner city mission, plus marriage between man and woman is valued but a sexual impropriety between protagonist and his girlfriend and with a vulnerable employee is suggested; no foul language; a drive-by shooting may overwhelm really young viewers, a character is tackled into a river, and protagonist is threatened with a knife; no sex scenes but implied fornication between protagonist and girlfriend and protagonist slightly sexually harasses a new woman worker from the inner city mission; no nudity; alcohol use and drunkenness; smoking; and, mismanagement of pets is depicted as a character intentionally overfeeds his boss’s fish until they die, plus gambling and racism.

THE BILL COLLECTOR presents a road-to-redemption story reminiscent of Jesus’ parable about the dishonest manager in Luke 16:8.

Initially, writer and director Cristóbal Krusen glamorizes protagonist Lorenzo Adams’ lifestyle through fast-paced promotions, fast women, and even faster cars. However, Lorenzo is soon corralled by his extravagant worldly ways when the menacing loan shark Frankie Gutierrez calls in his debt and leaves Omar, a boorish, gigantic enforcer with hints of a heart, to watch Lorenzo’s every move, with the threat of death if Lorenzo fails to pay.

Unable to repay his debts, Lorenzo dishonestly schemes against his employer, Stan, who has left Lorenzo in charge of the collection agency so Stan can vacation on an remote island with his wife to repair his failing marriage. Lorenzo, desperate for answers, replaces his co-workers with indigents from an inner city mission for an unpaid, two-week trial period in which they collect loans for pennies on the dollar. The plan succeeds through deep discounts to the debtors; the business collects record-setting profits; and, the new workers overlook Lorenzo’s deceptive business practices as eccentric.

It goes without saying that, eventually, Lorenzo’s good fortune fades, culminating in a scene where Lorenzo pays his debt to Gutierrez but is ambushed in a gang-related, drive-by shooting. After the dead bodies, dodged bullets and dollar bills settle, Lorenzo is depicted lying alone in a drab hospital room mirroring the darkness of his life. Sitting next to him, however, are Pastor Kevin, the head of the inner city mission, and the recently saved Omar.

Presenting Christ’s message of salvation and redemption, both characters try to lead Lorenzo out of his life’s spiritual darkness. The questions are, Will Lorenzo find redemption? And, What will happen to the recently redeemed Omar and all the current and former employees?

THE BILL COLLECTOR presents an overt evangelistic Christian worldview. In spite of the threat of retribution hanging over Lorenzo, there is a lack of jeopardy at many places throughout the movie that causes the plot to stall at times. The movie’s predictable plot is only overshadowed by an ending that strains credulity. Also, the comedy is often just misplaced buffoonery.

Part of the problem is the shallowness of Lorenzo’s character. Even so, the cast of characters is often enjoyable as brief stereotypes, but too much of the acting is exaggerated.

Even so, this movie can be entertaining at times. With that said, one should be on the lookout for future appearances by its likeable cast. Although noticeable over acting is present and the script occasionally flounders, this is a fairly entertaining low-budget movie.

The good news is that THE BILL COLLECTOR presents a strong Christian worldview with strong moral elements. Many scenes are set in church and the message of salvation is presented multiple times as two characters are led to Christ.