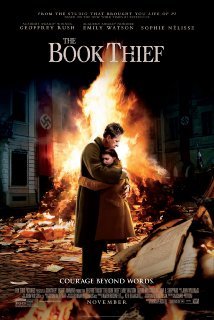 THE BOOK THIEF, set against the backdrop of Nazi Germany, follows 11-year-old Liesel’s search for home, family and belonging amid incredibly difficult circumstances. After the tragic death of her younger brother, Liesel is taken in by two foster parents and befriended by a little boy named Rudy. Papa Hans teaches Liesel to read. Liesel befriends max, a Jewish man hiding from the Gestapo. The wealthy burgomeister’s wife lets Liesel use her dead son’s exquisite library. Narrating the story is the voice of the Angel of Death. The Angel says he’s usually not concerned with the lives of humans, but the story of 11-year-old Liesel attracts him. “I am haunted by humans,” the Angel of Death confesses.

Based on the New York Times best seller, THE BOOK THIEF is wonderfully directed by Brian Percival of DOWNTON ABBEY. The performances are delightful and heartwarming, despite the difficult circumstances. THE BOOK THIEF tells a positive Christian, moral tale of adoption and self-sacrifice. Rated PG-13 for brutality, war themes, propaganda, and violence, THE BOOK THIEF requires caution for some serious subjects and some propagandistic elements.

(CC, BB, CoCo, HH, Ab, Pa, VV, M) Strong Christian, moral worldview includes elements of love and self-sacrifice, funeral scene with a priest praying, one quick prayer from girl’s adoptive father, and narrated by the voice of Death, who gives a vaguely biblical reference at the end, plus elements of love marred by stealing as a major plot device, pro-Communism, pro-humanism, racism, and propaganda claiming a difference between one form of socialism and another; some swearing in German that is not translated; violence includes adoptive mother disciplines a little girl, National Socialist thugs bash windows of Jewish shop owners, men and women kicked and brutalized by soldiers, girl beats up boy, boy beats another boy, two boys die, brutality, air raid bombs explode, and dead bodies recovered afterward; kissing and hugging; partial upper male nudity when boy takes a bath; no alcohol; no smoking or drug use; and, the vicissitudes of war, including falsified documents and scrounging for possessions.

Based on the New York Times best seller, THE BOOK THIEF is a wonderful work that follows the story of one young girl and her search for home, family and belonging. Set in National Socialist Germany, this is a small story that tugs at the heart. Her mother’s communist leanings in Nazi Germany brings her to the foster care system on the eve of World War II. Yet, wherever our young heroine goes, she blazes a trail transforming the lives of countless people. A story of adoption and a demonstration of Christian values, THE BOOK THIEF is a compelling movie that shows what love looks like in the midst of extraordinary hardship.

The story opens in 1938 on a train headed for Munich. Liesel watches her younger brother Warner who has quietly just died in his sleep. At a makeshift burial beside the railroad tracks, a gravedigger puts the finishing touches on the grave and inadvertently drops a book to the ground. Thinking the book belonged to her brother, Liesel quickly snatches it and runs.

The female German social worker brings Liesel to the home of Hans and Rosa Huberman (Geoffrey Rush and Emily Watson). The couple had agreed to foster two children for a monetary allowance. The 11-year-old Liesel, still reeling from her brother’s death, stands in front of the Huberman’s home on “Heaven” Street.

Liesel clutches her book. The cold atmosphere of the strangers’ home is quickly melted by the delightfully warm Hans. Insisting on being called Papa, he discovers Liesel cannot read and decides to teach her. A simple sign painter, he struggles to put food on the table amidst economic hardship. Refusing to join the Nazi party continues to put what little work he has at risk. Tensions are growing throughout town.

A young boy named Rudy befriends Liesel. She, in turn, defends Rudy from the town bully. Rudy and Liesel are soul mates.

After a National Socialist book burning, Liesel rescues a copy of THE INVISIBLE MAN by H.G. Wells. Smoking but not yet consumed. The wealthy burgomaster’s wife witnesses the act but says nothing.

Meanwhile, a sickly Jewish man, Max, running from the Gestapo arrives on the adoptive parents’ doorstep. Max’s father died to save Hans in World War One. Hans promised he would always be there for Max’s family, so they shelter him even though it puts them at risk of death themselves. Rosa’s overburdened and thunderous demeanor gives way to a deeply caring woman. She asks Liesel to take a basketful of laundry to the Burgomeister or mayor of the village. The Burgomeister’s wife recognizes Liesel and invites her to use the exquisite library.

Eventually, Max decides to leave so Liesel’s foster parents won’t get into trouble, but the father, Hans, is conscripted into the German army. This leaves Liesel and Rosa to fend for themselves. As the struggle to survive the war continues, Liesel gives hope to some of the people by reading from her beloved books and telling fabulous stories.

The story of this little girl who transformed and touched so many lives is wrapped up by the voice of a Narrator, the voice of the Angel of Death. Echoing Scripture, “even angels long to look into these things,” the Angel confesses “I am haunted by humans.” Even so, the Angel of Death never mentions salvation, Jesus Christ or any aspect of the one true Triune God.

Based on the New York Times best seller, THE BOOK THIEF is wonderfully directed by Brian Percival of DOWNTON ABBEY. The performances are delightful and heartwarming, despite the difficult circumstances. THE BOOK THIEF tells a positive Christian, moral tale of adoption and self-sacrifice.

Regrettably the movie is pro-Communist in parts and deceptively uses the old Communist ploy of distinguishing between National Socialism and International socialism. Also, the act of stealing is treated as a joke.

Even so, THE BOOK THIEF shows Christian love and compassion. It merits caution.

Rent or Buy THE BOOK THIEF: