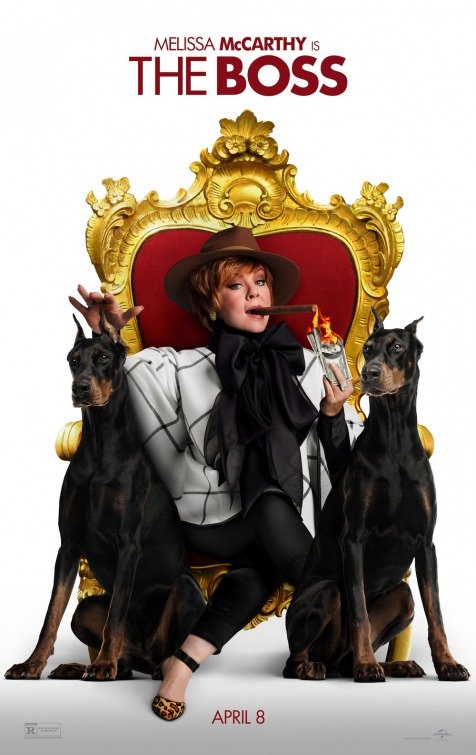 THE BOSS stars Melissa McCarthy as Michelle Darnell, a hard-nosed businesswoman convicted of insider trading. When she is released several months later, Michelle discovers the federal government has taken all her assets. She throws herself on the mercy of her long-suffering assistant, Claire. Claire lets Michelle live with her and her daughter, Rachel, for awhile. Michelle’s gets a new lease on life bonding with the two females. More comedy ensues when Michelle convinces Claire and Rachel to start a big business using the tasty chocolate brownies Claire bakes for Rachel’s scout troop.

THE BOSS has a consistently fresh and creative point of view, a well-drawn three-dimensional character in McCarthy’s Michelle, and many belly laughs. Sadly, media-wise viewers will find the frequent foul language and some distasteful, lewd comical references to be unacceptable. Especially since the movie includes solid moral, redemptive elements. For example, the opening has a positive portrayal of a kindly Catholic nun. Also, the rest of the movie includes strong pro-family, pro-capitalist redemptive values. THE BOSS could have been a much more family-friendly, acceptable movie without the foul, lewd elements.

(PaPa, BB, CC, CapCap, Ho, LLL, VV, S, A, DD, MM) Strong mixed pagan worldview with a lot of crude content and a few over-the-top lewd references, but with a moral, redemptive premise and other positive elements (including a Catholic nun is depicted in a positive way helping an unwanted child and forgiveness is eventually extolled, as is family), plus there’s a strong pro-capitalist theme promoting hard work and other capitalist values, but there are a few crude and/or implied homosexual references in a couple scenes; at least 103 obscenities and eight profanities; characters comically slap or punch each other a few times, an epic slow-motion battle royale between warring factions of girls and their leaders over cookie-selling territory with punching and kicking and setting two vehicles on fire, and a comical swordfight; some lewd foul language about homosexuality in a couple scenes (including a couple allusions to lesbian experimentation in one scene), implied fornication in a flashback and a comical scene about fitting into a bra; no nudity; alcohol use; flashback implies a couple snorted cocaine during the 1990s; many verbal and threatening insults (often laced with vulgarity) played for laughs, it’s implied woman accidentally exposed her private parts to her assistant while spray tanning, several families keep rejecting child given up for adoption until she becomes bitter about families and other humans.

Very few movie stars these days have managed to craft their image as well as Melissa McCarthy. Having come out of nowhere like a human tornado to steal Kristin Wiig’s 2011 movie “Bridesmaids” and earn a Best Supporting Actress Oscar nomination, she’s managed to find one role after another that has enabled her to make a total fool out of herself while still always getting the last laugh.

Her only misstep thus far was 2014’s “Tammy,” a dramedy about a working-class woman who hits the road with her out-of-control grandmother after losing her job and learning her husband cheated on her. That movie featured too many overly earnest moments where audiences were expected to feel sorry for her character, while the attempts at broad humor were too jarring. Strangely, McCarthy only had herself and her husband Ben Falcone to blame, since he directed the movie, and they co-wrote it together.

Sadly, though she performs best in the less outrageous and less profane MOLLY AND ME on CBS-TV, McCarthy’s movie career has been relegated to mostly R-rated comedies with lots of obscene foul language and clearly inappropriate lewd jokes. McCarthy’s newest effort, THE BOSS, pretty much follows that pattern, up to a point, but throws in a feel-good ending extolling family, forgiveness and capitalist values.

In THE BOSS, McCarthy plays a powerhouse businesswoman named Michelle Darnell (think Martha Stewart mixed with Oprah). Michelle goes to prison for six months for insider trading. When she gets out, she discovers she’s lost all her property because the Securities and Exchange Commission seized all her assets. So, Michelle turns to her long-suffering former assistant Claire for a place to stay while she gets back on her feet. Claire reluctantly allows her to move into the small apartment she shares with her preteen daughter, Rachel (Ella Anderson).

Michelle gets fired up about life again after meeting Rachel’s Girl Scouts-style troop of Dandelions and realizing that their brownie sales could be a major cash cow. It turns out Rachel’s mother, Claire, makes some pretty tasty chocolate brownies. So, Michelle and Claire raid the Dandelions’ membership to form their own organization, offering the girls in the troop both 10 percent commission and college savings accounts for their work selling brownies.

This sets off a war with an irate Dandelions mom. It also draws renewed attention from Michelle’s former lover-turned-rival, a dwarf named Renault (Peter Dinklage), who wants to take over her new brownie empire and shut it down.

These events are just the starting point for a movie with a consistently fresh and creative point of view, a well-drawn three-dimensional character in McCarthy’s Michelle, and a whole lot of belly laughs. In fact, Michelle might be McCarthy’s best all-around creation yet, as she alternates between hilariously steely verbal attacks against her enemies and sympathetic moments that mostly avoid being saccharine.

There’s no one quite like McCarthy on the Hollywood landscape, with her ability to hurl rapid-fire comic insults while keeping a sweet smile on her face and her willingness to pratfall her way through one outrageous physical scenario after another. Backing her up in THE BOSS is a winning straight-woman turn by Kristin Bell as Michelle’s new business partner, Claire, and Ella Anderson as Claire’s likeable daughter. A slow-motion battle royale between the Dandelions must be seen to be believed. Also, Peter Dinklage makes for a hilarious rival, though a final confrontation between his character and the title character goes on a little too long.

Sadly, media-wise viewers will find the frequent foul language and a couple distasteful lewd references intended for laughs in THE BOSS to be unacceptable. Especially since the movie includes some solid positive moral and redemptive elements.

For example, the movie’s opening shows Michelle being adopted then rejected three different times in her childhood. When she returns to the Catholic orphanage, the nun in charge of her there is shown to be sweet and sympathetic. Also, although Michelle has become bitter about families because of her traumatic childhood experiences, she comes to appreciate and love her assistant’s young daughter as well as the assistant, and has a big change of heart reflecting a strong pro-family sentiment. Finally, the movie has a very positive attitude toward capitalism and entrepreneurship. Despite Michelle’s abusive language and tactics around the kids, she teaches them to work hard and enjoy financial incentives for their hard work selling brownies. Eventually, she reforms her ways and even forgives her rival.

The strong positive content and ending make the crude content in THE BOSS even more regrettable. THE BOSS could have been a much more family-friendly, acceptable movie without the foul, lewd elements; and, probably even more entertaining.