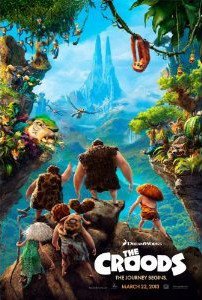 THE CROODS is a new animated comedy about one of the world’s first families. The Croods fear the new until their cave is destroyed. Grug loves to protect his family, including his wife, mother-in-law, teenage daughter Eep, son, and baby daughter. With his motto being “Fear is in the new,” Grug doesn’t like change. Then, one day, the family’s cave is destroyed by a platonic shift. The family has to travel together to get to higher land. Along the way, they meet Guy, a young man who knows how to make fire.

THE CROODS is a funny family movie showing the importance of sticking together and loving each other in the midst of everything. It’s a well-made animated movie. The audience is kept constantly amused by the movie’s clear plotline. The animation in THE CROODS is wonderful, full of imaginative images. The plot is about overcoming fear and taking a leap of faith to follow the sun to tomorrow. However, despite its positive themes, THE CROODS has some implied humanist, environmentalist elements. MOVIEGUIDE® advises families to use some media wisdom while seeing THE CROODS.

(BBB, C, H, E, V, N, M) Very strong moral worldview supporting family and sacrifice, but with some implied humanist, environmentalist elements; no obscenities or profanities, some light scatological elements; animated action violence with characters slapping each other, grandmother gets slapped, father gets hit in the face by monkeys, characters hunt for their food, some scary animals; no sexual content; upper male nudity, some women have small outfits; no alcohol use; no smoking nor drug use; and, teenage daughter is rebellious at times, father is put down upon on times, an emphasis on knowledge, and grandmother and father fight, but father loves his family.

One of the world’s first families, the Croods, fear the new until one day their cave is destroyed in the animated adventure, THE CROODS. THE CROODS is a fun adventure with a family who truly love each other, but it has some environmentalist elements.

Grug loves to protect his family, including his wife, mother in law, teenage daughter Eep, son, and baby daughter. With the motto being “Fear is in the new,” the Croods almost always stay protected in their cave. Eep wants to move out of the cave, to see the light and have adventure. However, knowing the world is a dangerous place, Grug advises against her leaving.

One night Eep sees a light and follows it outside of the cave. It turns out the light is a fire made by Guy, another human whom Eep has never met. Excited, Eep demands Guy to show her how he made the fire. Suddenly, when Eep returns to the cave, the world literally changes with a platonic shift and the family’s cave is destroyed. Pushed out into the new and unknown, the Croods decide to head towards the Mountain in order not to be crushed themselves.

On their journey to the Mountain, the Croods encounter Guy, who, being new, the family questions. Guy knows what’s happening with the world, and he has new inventions to cope with these changes. Most of the family embraces the changes. Everyone, that is, except for Grug. Completely enticed by Guy, Eep is excited Guy is showing the way, but this leads her father to be even more protective of her. Will the Croods be able to make it to a new life?

THE CROODS is a funny family movie showing the importance of sticking together and loving each other in the midst of everything. It also shows the need to seek goals and look forwarded to tomorrow with optimism. Though this is the case, the movie seems to focus on the enlightenment that knowledge brings. The plot is about overcoming fear to take a leap of faith to follow the sun to tomorrow.

THE CROODS is a funny well-made animated movie. The audience is constantly amused with a clear plot line. The graphics in THE CROODS are wonderful, with imaginative images, but it also has some implied humanist, environmentalist themes and scatological humor. So, MOVIEGUIDE® advises families to use some media wisdom while seeing THE CROODS.

Interviews with the cast and crew

Rent or Buy THE CROODS: