"Children Are a Blessing" 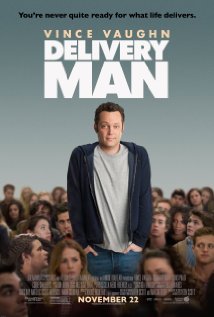 DELIVERY MAN stars Vince Vaughn as David Wozniak. David is an irresponsible, lazy manchild who’s always late to work making deliveries for his family’s butcher business. David learns his girlfriend is pregnant. He also learns he’s fathered 533 children via sperm donations 20 years ago. Now, 142 of those young people demand to know who their biological father is. David’s girlfriend says she’d rather raise the baby on her own because David’s so irresponsible. David decides to secretly track down some of his “children.” He decides that, while he can’t be a father to all of them, he can perhaps be their “guardian angel.” This complicates his life in humorous and serious, even touching, ways.

DELIVERY MAN mixes very funny moments with serious, heartfelt ones. As the star, Vince Vaughn shines in a role that seems made for him. Better yet, the movie has a strong pro-life message. It also shows David doing the right thing, even reconciling with his own father. However, DELIVERY MAN has some comical, crude innuendoes, brief foul language, and brief drug references. This negative content warrants caution.

(BB, C, Ro, Pa, Ho, LL, V, S, N, AA, DD, MM) Strong moral worldview that’s pro-life, with references to being a kind of “guardian angel” to some young people and children are seen as a blessing, mitigated by Romantic, pagan elements and minor male character is homosexual and kisses two men while being followed by his biological father who’s never met him; five obscenities (including one “f” word), one GD, and one light profanity; thugs threaten to beat protagonist up and dunk him in bathtub two or three times because he owes them $80,000 and later it is said they did the same thing to his father (who runs the family’s business) to get the money out of him; some verbal sexual innuendo/comedy such as the idea of sperm donations is discussed several times, a joke is made that sperm donor earned $12,000 for “manual labor,” a mention about “flying solo” in relation to sperm donor plot, Jay Leno says sperm donor with 533 children made money “hand over fist,” references in one scene to erectile dysfunction, sperm donor follows one of his children and sees him kissing two men but he’s clearly uncomfortable about it, protagonist’s lawyer pretends he has a male lover to protect his client’s identity and says his children are cool with it, and irresponsible protagonist gets girlfriend pregnant, but he proposes later after he showing her he can be more responsible; upper male nudity at public swimming pool alcohol use and protagonist helps a comically drunk young man get home safely; protagonist decides to grow marijuana in his home to pay off debt but later abandons the idea and protagonist saves daughter he never met from dying of a heroin overdoes, and he helps her change her life; and, protagonist ignores parking tickets, protagonist tries to lie about his identity a couple times, protagonist hides his identity from the public and 533 children he fathered through sperm donations, and protagonist’s lawyer advocates abortion when protagonist’s girlfriend gets pregnant, but protagonist rebukes him strongly.

DELIVERY MAN is about an irresponsible man who must learn to grow up and change his life for the better after learning that he fathered over 500 children via sperm donations 20 years ago. DELIVERY MAN develops a strong, heartfelt moral worldview that’s pro-life, with a lot of unexpectedly clean comedy, but it has some Romantic, pagan elements and innuendo, including brief homosexual references.

Vince Vaughn stars as David Wozniak, an irresponsible, lazy manchild who is always late to work and at making deliveries for his family’s butcher business. On the same day, he learns that his girlfriend is unexpectedly pregnant and that he’s been anonymously named in a class-action lawsuit by 142 young people who claim he’s their biological father. The children want to know his identity.

David’s girlfriend says she’d rather raise the baby on her own because David is so irresponsible. David decides to secretly start tracking down some of his “children” and seeing what they’re like. He quickly finds that, while he can’t be a father to all 142 of these people, he can perhaps become a “guardian angel” to them. This complicates his life in both humorous and very serious, even toughing ways.

Among the situations in which he finds himself are comically guiding home a fat drunk man. He also persuades dozens of people at a time to listen and donate to one of his sons, who’s a street musician. DELIVERY MAN also has some dramatic, touching moments as well. David discovers one of his daughters has overdosed on heroin and has to decide how best to help her kick her habit. He also befriends a son who’s severely disabled.

The court case looms closer to a judge’s decision. David also faces pressure from his pregnant girlfriend and from loan sharks seeking to collect an $80,000 debt he owes. It becomes clear that David has all sorts of decisions to make.

DELOVERY MAN is a PG-13 version of a small R-rated Canadian comedy, STABUCK, both directed by the same man. DELIVERY MAN mixes very funny moments with some very serious, heartfelt ones. Thus, it follows Walt Disney’s dictum that a great movie makes people laugh and cry. As the star, Vince Vaughn shines in a role that seems made for him.

Better yet, the movie has a strong pro-life message. It also shows the protagonist reconciling with his own father in a poignant, even whimsical, way that’s truly uplifting. Also, although there are some comical sexual innuendoes involving the subject of donating sperm, the movie is otherwise fairly clean, with only brief foul language. However, as noted in the plot description, the protagonist’s girlfriend becomes pregnant. There’s also one scene where David follows one of his 533 children and sees the young man kiss two other men.

Thus, while DELIVERY MAN offers up a pro-life story of parental responsibility and a stirring metaphor for the fact that humans are all part of the same human family in one way or another, the movie’s negative content and brief crudity warrant caution.

Of course, the fact that this comedy exists shows that there are all sorts of unintended consequences and moral problems with the issue of fertility clinics and donating sperm. For instance, what if a sperm donor fathers two children for two separate sets of parents, and the two children eventually meet and get married, without knowing they’re really related? Wouldn’t that be incest? Modern humans haven’t thought through these issues, but maybe they should start.

Starring: ** Children Are a Blessing **