"DUE To Be Forgotten" 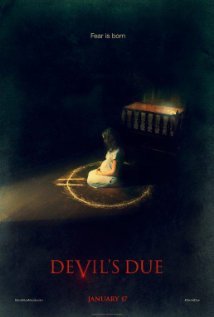 DEVIL’S DUE is another boring, unoriginal, ultra-violent horror movie that will soon be forgotten. Told through the home video camera of newly married couple Zach and Samantha, the story follows the pregnancy of Samantha and the odd occurrences that begin to plague the pregnancy. It’s revealed that a cult is using Samantha as the carrier of the antichrist that’s come to destroy the world in “the last days.”

DEVIL’S DUE is terrible on almost every level. The painstakingly slow-moving story has little suspense and no redeeming value. The depressing ending makes one wonder why the filmmakers even made the movie in the first place. The worldview is heavily pagan with many occult elements. Palm readers, satanic rituals, and occult symbols are presented and in the end win. Though the movie does quote Scripture and has a few scenes in a church, it’s used more as a religious backdrop to fit in with theologically false horror movie clichés. If that’s not enough to keep the audience away, the movie’s graphic violence and vulgar language should. DEVIL’S DUE is an abhorrent waste of time.

(OOO, PaPaPa, C, B, AbAb, LLL, VVV, S, N, A, DD, MMM) Very strong occult, pagan worldview with palm readers, satanic rituals, and occult symbols, plus, though a New Testament verse is shown at the beginning, God plays no role in defeating evil and the church is shown as pointless and useless, but there are light moral elements of a father who fights to save his wife and the baby he thinks is his, and there is a Christian wedding and a “first communion” ceremony at a Catholic church; 40 obscenities (many “f” words) and 13 profanities; very strong horror violence includes a pregnant woman eating a dead deer, stabbing a friend, cutting her own womb open and attacking her husband, all shown in graphic detail; it’s implied in one scene that a mysterious satanic cult has drugged a young married woman and conjured Satan to impregnated her, plus but lots of kissing between married couple; upper male nudity, woman in bathrobe and bikini; heavy drinking, but no clear drunkenness, is shown; no smoking but people are secretly drugged by a satanic cult; and, deceit and manipulation by villains, who are never punished but are victorious.

DEVIL’S DUE is another boring, unoriginal violent horror movie that will soon be forgotten, hopefully for good.

The movie opens with a young man (later called Zach), with blood all over his face and clothes being questioned at a police station. He despondently states that he didn’t kill “her.” The movie then cuts back to his home video camera, through which most of the movie’s story is told.

Zach and Samantha McCall are a newly married young couple. Samantha grew up an orphan because her parents were killed in a car crash when she was a baby. Now an adult, she’s brought into Zach’s loving family.

After the wedding, Zach and Samantha travel to the Dominican Republic for their honeymoon. They sightsee and visit local festivities. One night, they walk into a palm reading hut. The palm reader reveals some knowledge of Samantha and says, that “They are coming for her.”

Shaken up by the experience, they leave, but get lost in a sketchy part of town. A taxi driver shows up out of nowhere and offers to give them a ride, but he insists they visit this other nightclub for a moment. They reluctantly agree. They drink and dance and even meet some other honeymooners. Through the perspective of Zach’s video recorder, the audience sees that Zach and Samantha are drugged at the nightclub, and she’s placed in the middle of an satanic ritual.

Cut to the next morning in their hotel room. Neither of them have any memory of what happened the night before. Zach and Samantha head back home, and several weeks later find out that they are expecting a baby. Excited by the unexpected news, they prepare for the new addition to the family. However, weird occurrences around the house and odd behaviors from Samantha make them worry about the baby. As it turns out, Samantha was chosen by a satanic cult to birth the antichrist.

DEVIL’S DUE is terrible on almost every level. The home video style is just that, a home video that offers little depth and even less suspense. A better-developed story with similar styles would be the 2008 hit CLOVERFIELD. DEVIL’S DUE has a laughable ending that is so unsatisfying and depressing, it makes one wonder why the filmmakers even made the movie.

The worldview is heavily pagan with many occult elements. Palm readers, satanic rituals, and occult symbols are presented and in the end win. The movie starts off by quoting 1 John 2:18, “Children, it is the last hour, and as you have heard that antichrist is coming, so now many antichrists have come. Therefore, we know that it is the last hour.” While it’s common for secular horror movies to quote Scripture in order to excuse their hopeless stories, it’s a shame they don’t quote the rest of the passage in which Jesus is stated to be the hope.

That said, DEVIL’S DUE does show a marriage where a husband will do anything to protect his wife, and there are several Christian elements, including two different scenes taking place at church. Sadly, the Christian elements are there simply as a backdrop to the occult story. Also, God plays no part in defeating evil, because, according to DEVIL’S DUE, evil wins. If that’s not enough to keep you away from the movie, maybe the graphic violence and vulgar language will.