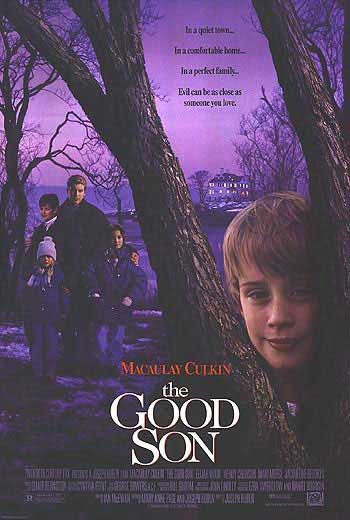 In THE GOOD SON, twelve-year-old Henry Evans (Macaulay Culkin) tries to teach his young cousin, Mark, his evil ways--and nearly succeeds. The movie contains picturesque cinematography, suspenseful pace and timing, and competent acting by Culkin and Elijah Wood--but it is not for children since they will see one of their favorite actors perpetrating evil on people.

In THE GOOD SON, set on the rugged Maine coast, Henry Evans (Macaulay Culkin) is a seriously disturbed twelve-year-old who does evil deeds. His cousin, Mark, comes to live with his family following his mother’s death, and the boys enjoy each other initially. However, Mark soon becomes aware of evil in Henry after he deliberately kills a dog with an arrow-like weapon he conceals in an old shed. Henry does many other evil things, and Mark tries to tell different individuals but to no avail.

A basic premise of evil versus good weaves itself into the complicated fabric of human nature in THE GOOD SON. The question the film asks is “What makes a person bad?” However, it also asks, “Where does evil come from?” The Gothic film setting promotes a dichotomy of good versus evil. The fine, picturesque cinematography, suspenseful pace and timing, and competent acting on the parts of Macaulay Culkin and Elijah Wood make the film worth seeing–although not for children at all, since they will see one of their favorite actors perpetrating evil on people. But for those who like a good psychological thriller, THE GOOD SON could supply an evening’s enjoyment.