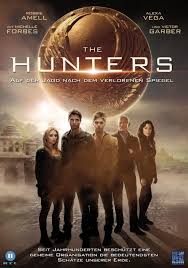 THE HUNTERS is a family-friendly action adventure movie about guardian warriors sworn to “find and protect, but never use” ancient and fabled magical relics. They must keep them from falling into evil hands at all costs. Jordyn and Carter Flynn are two of the best hunters, but must now rely on their children for the next mission to protect a magical mirror from an evil, selfish enemy. Pax, Tripp, and Dylan race to find the mirror’s broken shards before the villains do.

THE HUNTERS is an entertaining family-friendly movie with some moderately questionable elements. It proves that a movie can still be entertaining without any lewd content. The movie has a good storyline with an exciting climax and resolution. It also has a strong moral worldview. The guardian warriors fight for justice and stand with integrity as good versus evil with justice prevailing in the end. Along the way, they learn the value of honesty and togetherness not just a team of hunters, but as a family. That said, the magical elements in THE HUNTERS warrant caution for younger viewers.

(BBB, V, N, M) Very strong moral/biblical worldview as the guardian warriors fight to protect ancient or fabled relics from being used for evil that would do harm to others; no foul language; brief action violence sequences of fistfights and some guns fired, but no blood shown; passionate kiss; upper male nudity as Pax looks for tuxedo shirt; no alcohol; no smoking, but character falls asleep after she bites a poisoned/drugged apple; and, lying, stealing, kidnapping, betrayal, and greed for power at any cost but rebuked.

THE HUNTERS opens in Thailand with an aerial view of the country’s deities. Carter and Jordyn Flynn flee the scene where they have just retrieved a magical relic to keep it from getting into the wrong hands. Later they meet with Mai, another hunter, and discover the next item they are to recover. They go on a quest to find the missing shards of a magical mirror granting wishes. Carter and Jordyn find one of the shards, but are betrayed by Mai, who takes the shard and tries to kill them. Jordyn survives, but her husband, Carter’s, whereabouts are unknown.

Their sons, Pax and Tripp, are next on the hit list, and they have no idea what their parents are doing. They fight off some fake Interpol cops with the help of Dylan, whose parents are also hunters. Together, the three of them set out to retrieve this mirror that grants one’s deepest desire, and the three remaining shards that are needed to make the broken mirror “whole” again. As they embark on this task, they are hunted themselves by Mason Fuller, Mai, and Mai’s lackeys.

As the threesome journeys together, they travel to various places in the United States in search of the last shards. They discover the hard way that Mason, whom they befriended, is not to be trusted. Eventually, they are reunited with their mom and continue the quest together. As they journey, the four of them deal with trust and relationship issues within the group that are mostly resolved in the end as they complete the mission to recover the mirror shards. Ultimately, Jordyn, a veteran hunter, knows that the hunters take the same vow to “find and protect, never use” that which could bring them wealth, power, or what they most desire. So, she destroys the mirror for the greater good of mankind.

THE HUNTERS is a family-friendly movie with only moderately questionable elements. THE HUNTERS proves that a movie can still be entertaining without any obscenities or profanity spoken. The movie has a good storyline with a climax and resolution. As the story progresses, Pax is the character that undergoes the most change as he refuses to believe his parents are to be trusted and doing charitable work. Some of the fight sequences look too well staged and mechanical as when Dylan cartwheels in the house to retrieve the crossbow. It’s also hard to believe that a man with as much money and power as Mason Fuller would have the same three thugs to chase down the Flynns when they constantly beat and outwit them. There are a few points in the script where the dialogue between the characters sounded as if written by the same person, rather than the character resonating as an independent voice.

The worldview in THE HUNTERS is strongly moral. The whole story is a fight of good against evil. The hunters take an oath to “Find and protect. Never use.” This guides their moral compass to do the right thing in putting others before themselves and doing the greatest good for as many as possible. They fight for justice and stand with integrity in their roles as guardian warriors of ancient and/or fabled relics such as the mirror that grants one’s deepest desire. Along the way, they learn the value of honesty and togetherness of not just a team of hunters, but as a family. That said, the magical elements in THE HUNTERS warrant caution for younger viewers.

Rent or Buy THE HUNTERS: