THE KING OF STATEN ISLAND 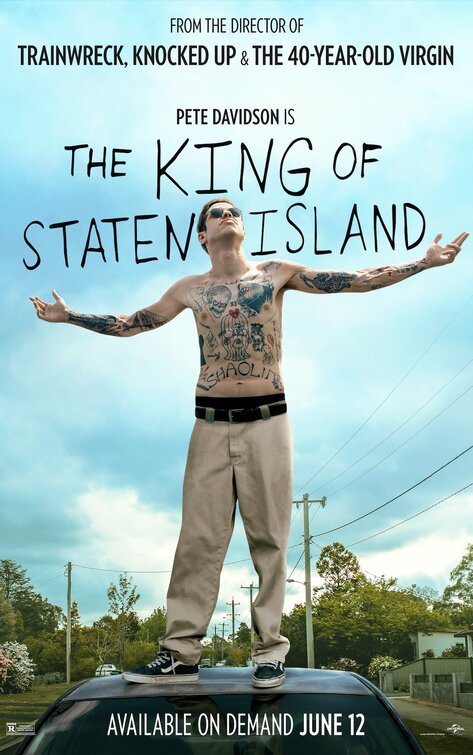 THE KING OF STATEN ISLAND stars SNL comic Pete Davidson in a fictionalized biographical comedy as Scott, an troubled, sarcastic 24-year-old young man. Scott is challenged when his widowed mother starts dating another man who happens to be a fireman just like Scott’s father, who died when Scott was seven. Scott sees a way to break up the relationship between his mother and Ray. He puts his plan into motion, but it has unexpected, bad consequences for both men. In fact, Scott’s mother kicks him out of the house. This forces Scott to overcome his grief over his father’s death and develop a better attitude.

The first half of THE KING OF STATEN ISLAND moves too slowly. Also, Scott isn’t a likeable fellow until his mother kicks him out of the house, and Scott is forced to get along with people better. THE KING OF STATEN ISLAND has an uplifting ending that honors firefighters. It also has some funny clean jokes and heartwarming moments. However, the movie is heavily marred by lots of strong foul language, some lewd content and marijuana use.

(PaPa, B, Cap, PP, LLL, V, SS, N, A, DDD, MM):
Dominant Worldview and Other Worldview Content/Elements:
Strong, slightly mixed pagan worldview about a troubled, aimless, sarcastic young man who has a bizarre idea for starting a new business and makes comical excuses for his aimlessness but eventually comes around when he’s taken under the wing of some older men who run a firehouse in New York City, so movie has strong positive view of firemen as first responders (movie includes a scene with brave firemen entering a burning building to save people)
Foul Language:
At least 219 obscenities (more than 130 “f” words), nine strong profanities, 14 light profanities, and middle school child tells school nurse he’s going to vomit and vomit comes out of his mouth
Violence:
Man is knocked down in two staged informal boxing fights after getting punched in the face, fireman climbs ladder and enters apartment building on fire through a window, fire explodes two or three times out the windows of the house on fire, fireman comes out of burning house with victims, young man deliberately closes his eyes while driving and causes a minor accident (the movie implies that the man is deliberately troubled and aimless because his father died when he was seven), four men agree to rob a pharmacy for drugs but one of the men gets shot in the shoulder and three go to jail while the fourth man gets away, young man has a wrestling fight with his mother’s boyfriend and at one point the older man tosses the younger one into an above-ground backyard pool, protagonist smashes his TV with a baseball bat out of anger, a man with a gunshot in his belly walks into a firehouse and is taken to a hospital by two other men who get blood on their shirs
Sex:
Depicted fornication in one scene, implied fornication in other scenes such as a couple lies in bed afterwards and a man and woman tell woman’s son that the man stayed overnight, and lewd references to sex in some dialogue
Nudity:
Upper male nudity and implied nudity but nothing explicit
Alcohol Use:
Some alcohol use and a group of fireman are shown drinking and celebrating after putting pout a fire and young man wakes up afterward with a headache
Smoking and/or Drug Use and Abuse:
Brief tobacco smoking in one or two scenes, multiple examples of marijuana smoking are shown in a positive light, and references to using cocaine and having stopped using cocaine four years ago, one of protagonist’s buddies sells pills and marijuana on the side, and young man makes favorable comments using marijuana that are not rebuked explicitly or implicitly, though it’s clear that marijuana use hasn’t made him good, much less wise; and,
Miscellaneous Immorality:
Strong miscellaneous immorality includes young man goes out of his way to wreck his mother’s serious relationship with a divorced man, family tension over this issue, tattoos, young man wants to open a tattoo parlor that’s also a restaurant, young’s man’s tattoo desires are eventually encourage when it’s clear he has a talent for drawing, and young man often makes sarcastic remarks and clearly has a talent for such comedy, which is sometimes harmless and satirical rather than mean, but he also uses it to get his way or attack others in a bad or mean way, though later he comes to realize he’s been too harsh with others and needs to be a better person.

THE KING OF STATEN ISLAND stars SNL comic Pete Davidson in a fictionalized biographical comedy as Scott, an aimless, troubled, sarcastic young man who finds himself challenged when his widowed mother starts dating another man who happens to be a fireman just like Scott’s father who died 17 years ago. THE KING OF STATEN ISLAND has an uplifting ending that honors firefighters, some funny clean jokes and heartwarming moments, but it’s heavily marred by lots of strong foul language, some lewd content, a protagonist who’s hard to like, and marijuana use.

At age 24, young Scott still lives with his mother and his sister, who’s just graduated from high school. Adorned with tattoos, Scott wants to start his own tattoo parlor that’s also a restaurant. However, he can’t get an apprenticeship to learn the trade, so he spends his days smoking marijuana with three buddies, who sometime let him practice his tattooing skills on them.

The movie reveals that Scott has been a troubled child ever since his father, a fireman, died accidentally 17 years ago while saving some people. Scott makes comical excuses for why he’s such a mess, but he also often uses his sarcasm to attack others, including his sister and sometimes his mother. Meanwhile, Scott also periodically ends up in bed with his longtime friend, Kelsey, but she wants something more from their relationship. Scott, however, doesn’t even want to talk about making a commitment.

Scott reluctantly attends his sister’s graduation party, which is held at the fancy house of her rich friend, who’s also graduating. Scott and his sister argue a lot, but when it comes time for her to leave for college, there’s some genuine feeling between them. His sister and his mother are extremely emotionally upset about her departure even though the sister is only going 45 miles away.

One day, an angry man named Ray comes knocking on the door of Scott and his mother, Margie. The man’s 9-year-old son had agreed to let Scott do a tattoo on his upper right arm, but it hurt so much that the boy ran away, and Scott was only able to draw a thin line. Ray berates Scott and shouts at Margie for how badly she must have raised her son. Margie works as a nurse at a school and a hospital. She tells Ray she can get a fancy laser from her hospital to fix the son’s arm. She says she’ll pay for the treatment, but Ray still leaves in a very angry mood.

A day or two later, a chagrined Ray knocks on Margie’s door and apologizes. He says he’s sorry he got so angry and asks her out for a cup of coffee. It turns out that Ray is a firefighter just like her dead husband.

Meanwhile, Scott’s uncle hires Scott to work as a bus boy at his uncle’s Italian restaurant, but the place is a little weird. For example, the uncle makes the waiters and bus boys fight for the tips, and Scott ends up losing every time.

Margie doesn’t tell her son she’s started to date Ray. However, when the relationship becomes serious, she decides to break the news to Scott. Predictably, Scott goes bonkers, especially after he learns Ray is a fireman like his father. Ray and Scott have trouble getting along, of course, but they try to make the best of it. As Ray’s relationship with Margie gets more serious, he makes Scott walk his two children to school from their mother’s house. The two children are actually quite charming, and Scotts starts to enjoy walking them to school.

However, after meeting Ray’s ex-wife, Scott sees a way to break up the relationship between his mother and Ray. He puts his plan into motion, but it has unexpected, bad consequences for both men.

Reportedly, THE KING OF STATEN ISLAND was conceived as a fictional biography of Pete Davidson where Davidson and his director and co-writer, renowned filmmaker Judd Apatow, imagined what Pete’s life would be like if he didn’t have a career as a comic. In real life, Pete’s own father was himself a fireman who died in the line of duty on 9/11 in 2001 when the World Trade Center towers collapsed after the Islamic terrorist attacks.

The first half of THE KING OF STATEN ISLAND moves too slowly. The problem with the story is that Scott isn’t a very likeable character. Also, he spends a lot of time with his three stoner buddies. Things pick up, however, when Ray forces Scott to walk his children to school. Eventually, Scott must overcome his grief and anger over his father’s death and move forward with his life. He even develops a better attitude toward other people. While that journey plays out, the movie gives viewers a nice, positive view of the firefighters in Ray’s firehouse, who help Scott develop a better direction in his life. Eventually, Scott even starts to get along with Ray.

THE KING OF STATEN ISLAND has some really funny clean comedy. For example, at one point, Scott’s girlfriend dates another man to make him jealous. Over dinner, she tells the other guy he looks like the actor Antonio Banderas, if she squints her eyes. Despite this clean comedy, almost every scene is peppered with lots of strong foul language. The foul language heavily mars the movie. If they cut out just half the foul language, the movie probably could lose almost a whole half hour. THE KING OF STATEN ISLAND also has a scene of depicted fornication between Scott and his girlfriend. It also implies that Ray starts sleeping with Scott’s mother and contains some other sexual references in the dialogue. Finally, THE KING OF STATEN ISLAND makes light of Scott’s marijuana use, though it may become clear to discerning viewers that Scott’s marijuana use with his stoner buddies is holding him back from making a better life for himself. Ultimately, the movie’s negative content overwhelms the uplifting ending. THE KING OF STATEN ISLAND has a mixed pagan worldview. The characters make immoral decisions even when they sometimes do the right thing or express positive thoughts and emotions.