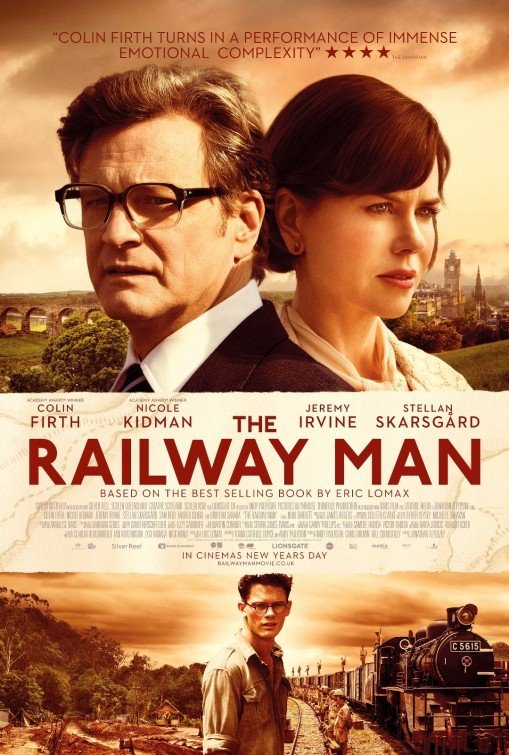 THE RAILWAY MAN opens with Eric meeting and falling in love with Patti. Their romance leads to marriage, but with it comes the realization that Eric is haunted by his brutal mistreatment during World War II. Flashbacks show Eric as a British engineer taken captive by the Japanese and forced to participate in building the Burma-Siam Railway. Caught building a radio, Eric is singled out for intense torture. Back in the 1980s, Eric hears that his primary Japanese tormentor now works at a museum in Burma that draws BRIDGE ON THE RIVER KWAI tourists. He goes to Burma seeking revenge.

Rare is the movie that shows justified hatred can simply be laid down and overcome by forgiveness. The result, shown in THE RAILWAY MAN, is healing. THE RAILWAY MAN warrants an extreme caution from Movieguide® only because of the Japanese atrocities and a suicide. THE RAILWAY MAN is not the kind of movie that’s going to top the box office charts or even come to your local multiplex, but it’s certainly worth seeing and a must for anyone struggling to forgive.

(CC, BB, ACACAC, PPP, VVV, N, MMM) Strong Christian, biblical, moral worldview with the heart of the movie being the hero eschewing revenge and forgiving the war criminal who tortured him, with some very strong anti-socialist content and every strong patriotic content where the war criminals displaying a heartless socialist worldview are clearly portrayed as evil and allied POWs during World War II show courage, bravery and sacrifice, plus the 23rd Psalm is quoted by friends forced to watch torture; no obscenities and or profanities; very strong violence in a POW camp includes brutal beatings, water boarding, imprisonment in small bamboo cages, forced labor resulting in deaths, images of skeletons and corpses, and a suicide by hanging; no sex; upper male nudity; people shown drinking in a pub; no smoking or drugs; and, heavy unjustified insults and war criminal dishonestly escapes punishment.

Based on a true story, THE RAILWAY MAN is a gut-wrenching tale of wartime atrocities, post-war emotional agony and a miraculous cure. Extreme caution is advised only for the scenes of brutality and torture that set up the movie’s gloriously redemptive ending.

The movie opens with Eric (Colin Firth) meeting and falling in love with Patti (Nicole Kidman). Their romance leads to marriage, but with it comes the realization that Eric has horrible dreams and fits because of his brutal mistreatment during World War II. The movie includes many flashbacks to the period when Eric (played by Jeremy Irvine) was among the British taken captive during the surrender of Singapore to the Japanese. Eric is taken to participate in the building of the Burma-Siam Railway, the same project featured in the classic movie THE BRIDGE ON THE RIVER KWAI.

An engineer, Eric managed to build a radio with parts either smuggled out of Singapore or stolen from the Japanese. Broadcasts heard on secret radio tell of Allied progress in the war, building the moral of the surviving prisoners. When the radio’s discovered, the Japanese single out Eric for intense torture.

Cut to the 1980s, where Patti seeks the help of some of Eric’s fellow soldiers to learn how she can help her husband. Finally, Eric receives a news story showing that his primary Japanese tormentor now works at a museum in Burma that draws BRIDGE ON THE RIVER KWAI tourists. He goes to Burma seeking some kind of closure through revenge.

Eric’s stamina, decency and honesty during the war are inspirational enough for a whole movie, but (SPOILERS FOLLOW) but his willingness to forgive lifts the story even higher. The great lesson is that forgiveness empowers people to let go of justified hate and bitterness. A very popular theme in violent action movies is justified revenge. Rare is the movie, however, that shows justified hatred can simply be laid down and put behind us. The result, as shown in THE RAILWAY MAN, is healing: Miraculous healing!

While the movie seems to say that Eric’s love for Patti enabled him to forgive, for most people such astounding forgiveness is made possible by God’s demonstration of forgiveness through Jesus Christ. The movie includes a very emotional scene in which you see a friend of Eric reciting the 23rd Psalm while watching Eric be beaten to a pulp. In fact, much of the worst brutality is committed while audiences see only the upset expressions of fellow soldiers.

MOVIEGUIDE® only advises extreme caution for THE RAILWAY MAN because of the depicted Japanese atrocities and the suicide of a friend. Shockingly, it has no foul language. The fact that you don’t miss it at all shows you can still make a very strong war story without spewing vulgarity. THE RAILWAY MAN is not the kind of movie that’s going to top the box office charts or even come to your local multiplex, but it’s certainly worth seeing and a must for anyone struggling to forgive.