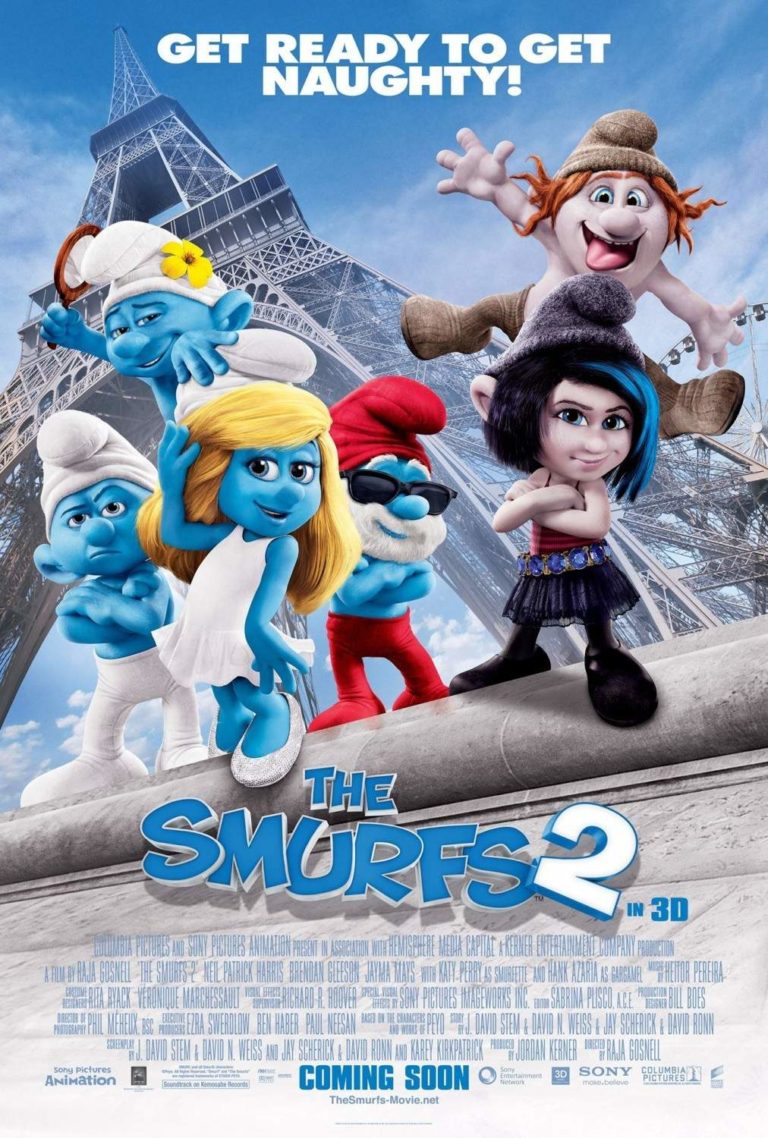 SMURFS 2 returns the pint-sized blue heroes back to the big screen. Smurfette is Smurf-napped by the evil wizard Gargamel and his “Naughties.” Gargamel has an evil plan to steal what makes the Smurfs “true blue” to make him the most powerful wizard in the world. It’s up to Papa Smurf, Clumsey, Grouchy, Vanity, and the Winslows to rescue her! They journey to Paris and adventure around the city trying to get Smurfette back. In the end, they all learn the meaning of love and family.

SMURFS 2 is well made with some impressive animation, sound, vocal talent, and storyline. It’s entertaining for children as well as adults. Even better, the movie has a strong moral worldview that says moral virtues are the true magic of life, virtues such as sacrifice, love, protecting life, family, and adoption. Parents should be cautioned, however, about some light animated slapstick violence, some implied language, and the movie’s confused definition of magic. In the end, the true magical elements of SMURFS 2 are the moral values the Smurfs represent. Ultimately, it’s love that makes a Smurf true blue.

(BB, C, Pa, O, V, N, M) Strong moral worldview with a redemptive element of positive change through sacrifice that also extols love, kindness, family, adoption, life, and respect, marred by brief pagan magic that borders on the occult but the focus is on working together to defeat evil; no foul language, but the word “Smurf” is used to replace obvious obscenities (“son of a Smurf,” “Smurfin,” etc.), plus belching humor as well as some passing gas humor (“every time a Smurf toots someone smiles’), and brief scatological humor (“I nearly Smurfed my pants”); lots of light action and comic slapstick violence including plenty of chases, falls, Gargamel gets smashed by a taxi but doesn’t get hurt, Smurfs hit man in face, bakers try to smash Grouchy, wand zaps glass and throws Smurfs off building, Smurf falls on pole between his legs and yelps, Gargamel smashes into the Eiffel Tower, Gargamel gets poked in the rear and bitten in the rear by an enchanted gargoyle, ferris wheel almost smashes family, Gargamel is thrown into the air by fireworks, etc., but no one ever gets injured.; no sexual content; upper male naturalistic nudity, implied rear male naturalistic nudity (Smurf says “I have seen unspeakable things down there”), partial animated male rear nudity of a Smurf’s bottom; no drinking or drunkenness but Smurfs sing “99 bottles of Smurf on the wall” and Smurfs run through alley over beer and wine bottles; no smoking or drug use; and, lying, kidnapping, stealing, bribery, threats, but all seen as bad things and hence rebuked.

MURFS 2 returns the pint-sized blue heroes back to the big screen. The adventure takes place in Paris this time around for the Smurfs and their friends the Winslows. Smurfette has been kidnapped by the evil wizard Gargamel and his “Naughties,” some Smurf-like creatures who are gray rather than blue. These dastardly villains have taken Smurfette to the City of Love, where Gargamel has found success as a magician. They are trying to force Smurfette to give up the secret spell that will turn the Naughties into true blue Smurfs.

However, Papa comes to the rescue! With Vanity, Grouchy, Clumsey, Patrick and Grace Winslow, and Patrick’s estranged stepfather in tow, he journeys to Paris to bring Smurfette home.

The main storyline shows Smurfette as she struggles to understand who she is and where she belongs. Even though Gargamel created her, she wants desperately to fit with the blue family that loves and cares for her. This is challenged when she meets the Naughties, Vexy and Hackus, her “biological” brother and sister, and starts to connect with them. Will she decide to reunite with her naughty relations or stay true blue? Will Papa convince Smurfette of their love for her?

In the background, Patrick Winslow is going through the same sort of conflict. His estranged stepfather, Victor, has entered the scene, and Patrick is not happy about it. The two have never gotten along, and Patrick has to learn that family may mean who’s there for you.

SMURFS 2 is well done, with great animation that bridges the gap between the real and drawn world nicely. There’s also an impressive soundtrack, talented vocal work, and an entertaining, engaging storyline. Children will enjoy the animated action and adorable Smurfs, while parents will enjoy the beautiful backdrop of Paris as well as some higher comedic jokes geared just for them.

The heart of the movie and the extreme moral values it extols really makes the movie shine. Gargamel the evil magician wants power, and he can only get it from the Smurfs. What’s the special power they have? It’s their “blue” nature, which turns out to be their love, kindness, respect, sacrifice, and ability to believe the best in everyone. The Naughties try to change Smurfette, but she ends up changing them, by sacrificing everything to save their lives.

However, some caution is warranted. First, SMURFS 2 contains light animated slapstick violence, some brief upper male nudity and some implied language when the word “Smurf” is substituted for obscenities. There are also a few elements that seem to play upon the Genesis creation account. For example, Gargamel creates the Naughties out of clay to help him steal the special power of the Smurfs. He also wants everyone to worship him as well as create “Smurfageddon,” where there are no more Smurfs and only he has Smurf power. It is only after a magic spell that the Naughties can turn good and become “true blue” kindly Smurfs. The spell includes some elements from nature, but the real catalysts for the change are a “loving truth,” a “hopeful thought,” and all the other moral virtues the Smurfs represent. In this way, however, the movie seems to equivocate a bit on the word “magic.” It also seems to equivocate a little bit on the word “family” when it suggests that family doesn’t necessarily mean your biological parents, but who’s there for you.

All that said, SMURFS 2 overall does a good job in bringing the pint-sized heroes back for another adventure. Ultimately, it’s the movie’s moral values that make this entry a family-friendly outing. In fact, SMURFS 2 extols love, kindness, family, adoption, the value of life, and respect. Ultimately, therefore, it’s love that makes a Smurf true blue. As such, SMURFS 2 helps moviegoers learn what it really means to make your love “True Blue.”

Rent or Buy THE SMURFS 2: