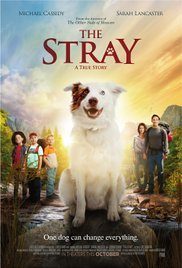 HE STRAY is a heartfelt movie that proves a dog can have a powerful impact on people. Mitch Davis is a workaholic executive for a big studio in Hollywood whose passion is to become a screenwriter. Mitch is clueless that his son Christian desperately wants his father to spend time with him because he’s being bullied and struggling in school. One day, a stray dog helps Christian fend off a bully. The family adopts Pluto the stray dog. Mitch takes Christian, Pluto and two other boys on a trip to the Colorado mountains, but a treacherous storm threatens them all.

THE STRAY is artfully directed by the real Mitch Davis who lived to tell the tale of being struck by lightning. The movie is so entertaining it’s easy to forget it’s a true story. Viewers will laugh and cry. That said, a few scenes drag on too long. However, THE STRAY teaches important lessons about forgiveness, sacrifice and trusting God, even in difficult situations. THE STRAY can be enjoyed by the entire family, though young children may be scared by the storm.

(CCC, BBB, V, N, M) Very strong Christian, moral worldview promoting putting God and family first, sacrifice, forgiveness, trusting God, and prayer, plus prayer is answered (movie made and released by Mormons); no foul language; some action violence includes character struck by lightning, school bully attacks other boy but is knocked to the ground, and girl goes missing; no sex; brief upper male nudity; no alcohol; no smoking or drugs; and, man works too much and this puts a strain on his marriage.

THE STRAY tells the miraculous true story of how a stray dog named Pluto helps Mitch Davis and his family through trials and tragedy. THE STRAY is an artful, entertaining family movie that teaches important lessons about forgiveness, sacrifice and trusting God even in difficult situations.

Mitch Davis is a workaholic screen executive for a big studio in Hollywood whose true passion is to become a screenwriter. He spends days and nights dedicating his life to work, leaving no room for his family. Mitch is clueless that his son Christian desperately wants his father to spend time with him because he’s being bullied and struggling in school.

One day as a bully is attacking Christian on the playground, a stray dog pops out of nowhere to defend the boy. The dog saves the day by knocking the schoolyard bully to the ground. Christian ties the dog up to a piece of grass during the rest of the school day but much to his dismay, the stray is gone when he returns. Christian assumes he will never see the dog again until it’s waiting for him at his bus stop on the way home from school.

Christian quickly bonds with the dog and names him Pluto. The boy brings Pluto home and begs his parents to let the dog stay.

Ironically, Mitch was discussing getting a dog with his wife Michelle earlier that same day. Michelle is not too fond of the idea and says she will agree if a stray miraculously shows up at their door. After eavesdropping on the conversation, the younger daughter Rachel prays for a dog. Mere hours later, God answers Rachel’s prayers and Christian shows up with the dog. So, the family decides to adopt Pluto. Rachel endearingly calls the stray “Pluto the Wonder Dog.”

Flash forward two years later. Mitch’s overworking is putting a tremendous strain on his marriage. Michelle gives Mitch an ultimatum that it is either her or Hollywood. Selfishly, Mitch refuses to give up his job until his world falls apart after their 2-year-old daughter Kenzie goes missing. The family frantically searches the neighborhood and ultimately finds Kenzie at a park with their dog Pluto. Once again, Pluto “the Wonder Dog” saves the day.

After this earth-shaking incident, Mitch rethinks his priorities. In order to rebuild his family, Mitch sacrifices his glamorous life as a screen executive to move to Colorado on a ranch in the middle of nowhere. In the quiet, small town life, Mitch pursues his original dream to become a screenwriter.

The son Christian is still upset with Mitch for missing out on his life even after his father’s big gesture of leaving Los Angeles for a farm in Colorado. In an attempt to win back his son’s love, Mitch looks around town to find Christian some friends that can go on a camping trip with them. He invites their neighbor’s son, Smitty, and his dentist’s son, Clark, to go on an adventure in the Colorado mountains. Christian begrudgingly goes on the camping trip with Smitty, Clark, his father, and their dog Pluto. Mother Michelle and daughter Rachel are anxious about letting Pluto go with the boys, but Mitch brings along the dog anyway.

The boys’ trip is all fun and games until a treacherous storm hits. Will Mitch and the boys survive?

THE STRAY is artfully directed by the real Mitch Davis who lived to tell the tale of being struck by lightning. The movie is so entertaining that it’s easy to forget that it is a true story. Viewers will laugh and cry. That said, a few scenes seem to drag on too long. Also, parts of the movie feature some unnecessary dialogue that could have been deleted. However, Director Mitch Davis has a keen eye for detail and beauty. Shots of Colorado’s sweeping landscapes add a beautiful artistic element to the movie. In addition, the movie includes some well-placed humor that lighten even the heaviest moments.

THE STRAY can be enjoyed by the entire family, although young children may be afraid of the thunderstorm sequence. For this reason, the movie is fittingly rated PG. Best of all, however, THE STRAY is full of apparent Christian, moral messages and many heartfelt moments that will leave viewers inspired and satisfied. Readers should note that the movie apparently has been produced and is being released by Mormons.

Rent or Buy THE STRAY: