"It All Begins with a Choice" 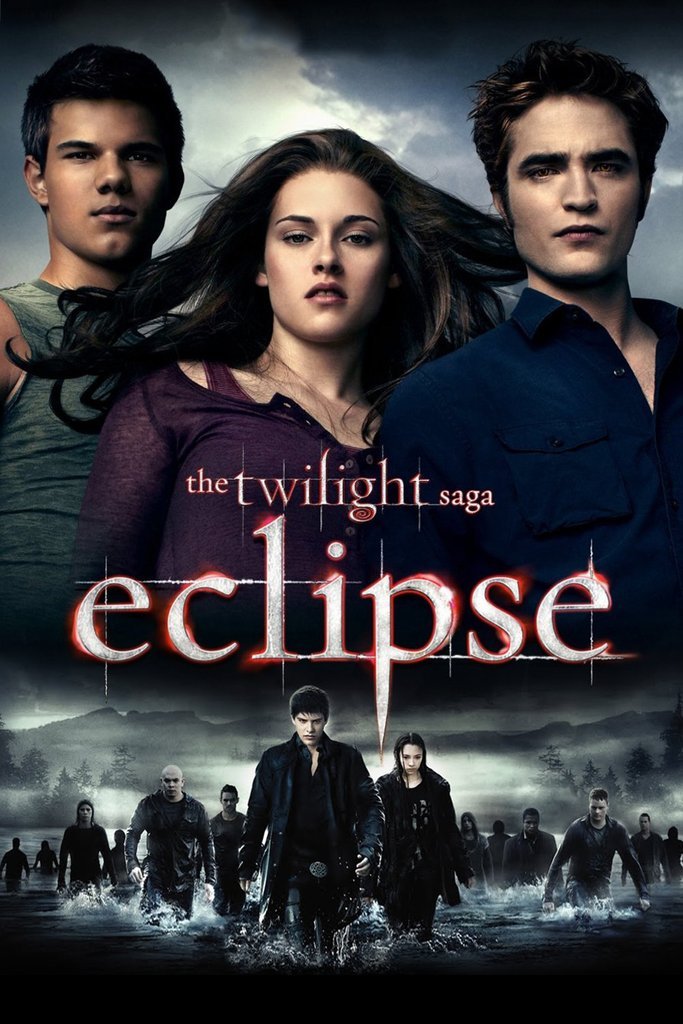 THE TWILIGHT SAGA: ECLIPSE is the third installment of Stephenie Meyer’s popular vampire series. The story’s heroine, Bella, is faced with a choice of choosing Jacob the Indian werewolf shapeshifter or Edward the vampire who has taken a vow against hurting humans. Edward proposes marriage to Bella. Meanwhile, the female vampire Victoria is bent on revenge against Bella and Edward for killing her mate in the first movie. Edward’s vampire family must try to forge an alliance with their enemies, Jacob’s werewolf tribe, in order to protect Bella and stop the vicious vampire army created by Victoria to carry out her revenge.

ECLIPSE has moments of thrilling adventure and action. The characters are vivid, the dialogue is good, and the production values are high. ECLIPSE also extols some strong moral values, such as waiting until marriage to engage in sex, getting a father’s approval for a relationship, kindness, and overcoming differences to fight great evil. These positive qualities, however, are marred by many Romantic, occult, pagan elements and light hidden Mormon theology. These problem areas demand strong caution and media wisdom. Please see our full review at Movieguide.org to learn more.

(BB, PaPa, OO, RoRo, H, FRFR, AbAb, L, VV, S, N, VV) Movie promotes a strong moral worldview with positive values, such as unconditional love, enemies making peace, goodness prevailing, waiting until marriage to engage in sex, and justice, which in many ways dominate the mixed occult, pagan, Romantic, humanist aspects of its story, which includes vampires, werewolves, mentions of false Native American religion, reading other people’s thoughts, supernatural powers, heroine follows her heart and emotions, and heroine wrongly doesn’t believe she will lose her soul if she becomes a vampire like her fiancé, who refuses to drink human blood and who says he wants to protect her soul; five relatively light obscenities and three light exclamatory profanities; strong, sometimes intense, violence with some blood such as evil vampires attack people in Seattle, vampires get decapitated like an ice sculpture, fighting between vampires and between vampires and werewolves, people and supernatural beings are killed; no depicted sex but passionate kissing and some discussion about premarital sex, with boyfriend from an earlier age convincing skeptical modern girlfriend to wait until marriage; Native American teenager is shirtless in many scenes to the point his rival asks, “Doesn’t this guy own a shirt?”; no alcohol; no smoking or illegal drugs; and, jealousy, heroine idolizes her boyfriend to the point of obsession, and heroine expresses willingness to leave her family behind and disappear with her future vampire husband.

THE TWILIGHT SAGA: ECLIPSE is the third installment of Stephenie Meyer’s popular vampire series to adorn movie theaters. This intense movie has plenty of thrilling moments and moral worldview elements that almost overcome its occult origins as a vampire story and its use of pagan American Indian mythology to fashion a moral tale about good versus evil. As such, it also supports marriage before sexual activity, protection of the weak, and setting aside one’s differences with others to fight great evil.

The story of ECLIPSE starts out like a horror movie, with a young man or older teenager walking around in an unknown city at nighttime. He is attacked by shadowy forces, as there is a screeching sound.

Cut to Forks, Washington. There, Bella is resuming her relationship with Edward the vampire. She is torn between her love for Edward and her friendship with Jakob, Bella’s Indian friend who has now become part of his tribe’s werewolf shapeshifting clan.

Jakob continues trying to win Bella’s love, and she continues to deny any and all feelings for him. Bella has made the decision to become a vampire and join Edward’s family of animal hunting vampires, the Cullens. Bella takes a trip to Florida with Edward to visit her mother, claiming she is going to school at the University of Alaska because she knows she will have to stop seeing her mom after she becomes a vampire. That’s because the leaders of the vampires, the Volturi, have laws that require vampires to maintain a very low profile and separate from their biological families.

Meanwhile, there are many mysterious killings going on in nearby Seattle, and it appears that there is a serial killer on the loose. Also, Jakob conveys to Bella that the vampire known as Victoria is stalking Bella because Bella and Edward killed her mate, the evil vampire James. Edward has been hiding this information from Bella.

It turns out that Victoria has transformed the male who was attacked in the first scene, whose name is Riley, into a vampire. Under her control, Riley is making an army of newborn vampires in Seattle to go to Forks and destroy Bella, Edward and the Cullen clan. Apparently, newborn vampires are the most aggressive and strongest, having more desire to kill humans in their first few months than any other vampire.

Meanwhile, Edward officially proposes to Bella, stating his values and desires to wait until marriage to have sexual relations. Bella eventually agrees and accepts, even though she states she doesn’t share Edward’s values.

Jakob’s tribe and the Cullens find out about Victoria’s plans for war. The werewolf tribe and the Cullen clan realize they need to put aside their differences and come together to protect Bella. Neither have enough individual power on their own to defeat Riley’s small army, so they begin training together.

The question becomes, Can these two natural enemies maintain their alliance long enough to save Bella? And, will Bella turn toward Jakob, even though she’s promised to marry Edward? After all, if she marries Jakob, they can grow old together, and Bella can stay in touch with her parents.

ECLIPSE is better made than the first two TWILIGHT movies. Its narrative structure and pacing are more interesting and compelling. They also have more energy. Also, its story seems deeper morally and, hence, to a degree less objectionable. That’s because it focuses on the moral conflicts within the plot rather than the theological problems in the second movie or the sometimes silly and overwrought teenage romance in the first one. Morals in the movie include waiting until marriage to engage in sexual activity, getting a father’s approval for a relationship, treating people kindly, and trying to overcome differences to fight a great evil that’s intent on murdering all who oppose it (the vampires and werewolves want to protect the humans in Forks, not just Bella). There is also a strong forgiveness theme as Kristin and Edward continue to forgive each other with each wrong. Finally, in one scene, Edward says he wants to protect Bella’s soul and indicates he may stop at nothing to do so.

Despite these moral trappings, it should be noted that the TWILIGHT SAGA has some Romantic, occult, pagan elements, including the supernatural vampire/werewolf motifs and references to American Indian mythology. Also, the original books are written from a Mormon viewpoint. As such, they present an allegorical story consistent with Mormon theology, which is heretical because it violates basic biblical truths taught by Jesus Christ and firmly accepted by His first disciples in the First and Second Centuries.

For instance, Bella, the story’s female heroine, yearns to become a supernatural creature like Edward, whom she views as a kind of God. Like his vampire family, the Cullens, Edward has risen above his baser nature (he refuses to drink human blood anymore), so he and the Cullens are now able to pursue higher and higher intellectual and humanitarian ideals (the patriarch of Edward’s family, Carlisle, is a doctor who goes around healing people). This scenario is a metaphor for Mormon belief, which says that people can become gods by rising above their sinful nature and pursuing good works.

Mormon theology is completely different from New Testament Christianity, which teaches that salvation and deliverance from sin is a free gift from the one and only True God, through belief in the vicarious atonement, death and resurrection of Jesus Christ. Thus, good works are not a means of salvation or redemption. Instead, they are only an expression of our salvation in Christ. And, faith, which is a gift from God, is the means by which human beings appropriate that salvation and begin to have communion or fellowship with God, though Jesus Christ, by the power of the Holy Spirit.

The good news is that most people seeing ECLIPSE probably will not see these connections to Mormon theology, which perhaps are more ambiguous in this movie than in the books. Even so, be extremely cautious about your children seeing this movie, since the more intelligent they are, the more they may adopt the movie’s philosophic and metaphysical elements into their own worldview and scripts of behavior.