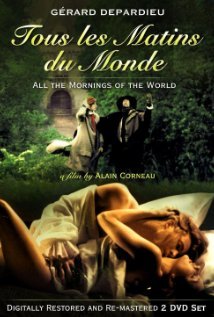 The film TOUS LES MATINS DU MONDE, set in seventeenth-century France, involves a temperamental musician of the viol da gamba, Monsieur de Sainte Colombe, his eager student, Marin Marais, and Colombe's two daughters. The story line develops around Colombe's exquisite musicianship, his sometimes flighty pupil and the relationship between Marais and Colombe's eldest daughter. The cinematography, music, and acting are unsurpassed, and it is a film of heart and substance which has won many international awards.

The film TOUS LES MATINS DU MONDE, set in seventeenth-century France, involves a temperamental musician of the viol da gamba, Monsieur de Sainte Colombe, his eager student, Marin Marais, and Colombe’s two daughters. The story line develops around Colombe’s exquisite musicianship, his sometimes flighty pupil who becomes a court musician, and an intimate relationship between Colombe’s eldest daughter, Madeleine, and Marais. After Marais’ relationship with Madeleine is broken, and he leaves for court life and marriage to someone else, Madeleine never recovers.

The movie reveals filmmaking at its best: in the picturesque French countryside and rustic buildings; in the authentic, charming costumes of the people; in the admirable cinematography, realistic at times in dark, sombre tones, and yet again, brilliant in dazzling sunshine; and, finally, in the excellent, haunting baroque musical strains that run through the entire piece and complete this rare gem–this work of art. The acting, too, by Jean-Pierre Marielle as Monsieur de Sainte Colombe and Gerard Depardieu as Marin Marais (as well as all the others) is commendable. The outstanding acting, musical performances, excellent script, and overall impact earned the film seven Cesars (French), including Best Film, Best Director, Best Supporting Actress, and Best Music. Regrettably, TOUS LES MATINS DU MONDE does have two scenes with objectionable elements (brief nudity and implied fornication).