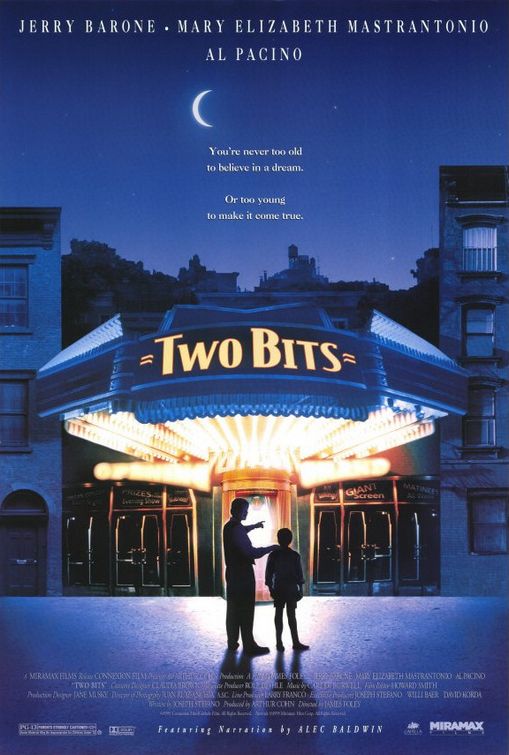 TWO BITS is a charming, warm movie that highlights the relationship between an Italian grandfather and his grandson in south Philadelphia in the 1930s. Containing some obscenities and a little twisted theology, it is primarily a character study demonstrating strong family bonds, church attendance, forgiveness, and never giving up on one's dreams.

TWO BITS is a charming, warm movie that highlights the relationship between an Italian grandfather and his grandson in the 1930s. Grandpa, played by Al Pacino, announces to his 12-year-old grandson Gennaro that he is going to die today. Grandpa promises Gennaro that he can have a quarter when he dies because Gennaro desires to attend the new movie theater which costs 25 cents. Not wanting his Grandfather to die, Gennaro decides to earn the money himself. He sings, works in a grocery store and sweeps out cellars, but only makes 15 cents. In a very moving scene, Grandfather has Gennaro go to a woman he hurt long ago and ask her for forgiveness. Regrettably, by the time he earns enough money and reaches the theater the price has gone up to 50 cents. Crestfallen, he returns home and discovers Grandfather near dead. Gennaro goes to grandfather who says to Gennaro with hardly a voice left to never stop wanting. Then, grandfather dies, Gennaro gets his quarter and, as Gennaro enters the theater, he hears his grandfather’s voice giving him one last word of advice.

This movie is exceptional in every way. Containing some obscenities and somewhat of a works theology, it is primarily a character study emphasizing family ties, church attendance, forgiveness, and never giving up on one’s dreams.