WAR FOR THE PLANET OF THE APES

"Humanity Must Be Replaced" 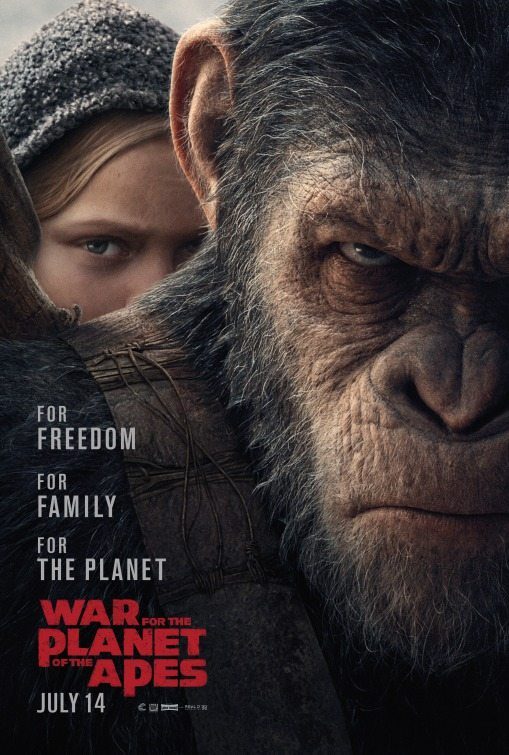 WAR FOR THE PLANET OF THE APES opens when an evil American colonel raids the secret hideout of the apes. During the raid, the Colonel kills the leader of the apes, Caesar’s, wife and eldest son. Consumed by revenge, Caesar orders the apes to seek a sanctuary beyond the desert that his son discovered before he died. Accompanied by friends, Caesar heads north to the Colonel’s camp. Will Caesar be consumed by his lust for revenge?

WAR FOR THE PLANET OF THE APES is elaborate, carefully made and emotional, but the conflict’s too manipulative. All the humans are evil ciphers, except for the vicious Colonel and one of his privates. Caesar eventually is able to overcome his lust for revenge. Also, he becomes a Christ figure at one point. However, the Colonel calls himself “Alpha and Omega,” a reference to Jesus Christ’s identity in the Book of Revelation. Also, at one point he plays the American national anthem. So, the movie’s dominant worldview is politically correct, Anti-Christian, Anti-American, and humanist. Humanity is the villain in WAR FOR THE PLANET OF THE APES.

(HH, AbAb, PCPC, APAP, B, C, L, VV, A, M) Strong Anti-Christian, politically correct humanist worldview overall where sentient humans, God’s ultimate creation, are evil and must be destroyed, with the villain and his henchmen overtly associated with Jesus Christ’s self-identification of himself as “the Beginning and the End, the Alpha and Omega,” and villain also plays America’s National Anthem, “The Star-Spangled Banner,” to his troops, mitigated by some moral elements (including a story premise promoting compassion over revenge) and some Christian allegory where the false savior of the planet, the villain, crucifies the ape hero; one “h” obscenity, one Jesus profanity, one GD profanity, and one light My God profanity; strong, intense violence includes gunfire, humans shot by arrows, apes shot by arrows and gunfire, an army of humans charges a group of humans in a makeshift fortress, evil humans whip apes, apes encounter dead apes on makeshift crucifixes, hero ape is put on one of those crucifixes overnight in bitter cold and almost dies, explosions, man shot point blank when he raises his rifle, villain tells how he had to kill his own son because he was infected by a terrible disease, character kills himself off screen with a gunshot heard; no sex; no nudity; alcohol use; no smoking; and, revenge, but it’s rebuked, and villain forces apes to become slave labor.

WAR FOR THE PLANET OF THE APES finds Caesar, the leader of the apes, fighting a lust for revenge when an evil American colonel kills his family and puts the apes in a concentration camp. WAR FOR THE PLANET OF THE APES is an elaborate, carefully made, emotional story, but the conflict is too pat and manipulative with an Anti-Christian, Anti-American, politically correct humanist worldview mitigated by some moral, redemptive elements.

The movie opens with the apes defeating a small human patrol, which is aided by two traitor apes. Caesar sends back the survivors to tell their leader, the Colonel, to leave them alone. However, the Colonel was following the patrol. He leads a night raid against apes’ cave hideout and kills Caesar’s wife and eldest son.

Consumed by revenge, Caesar orders the apes to seek out a sanctuary beyond the desert that his son discovered before he died. Meanwhile, Caesar sets off to the north where the Colonel’s camp lies. Several of his friends decide to accompany him over his objections. Along the way, they make friends with a talking chimpanzee, the only survivor of an animal sanctuary, and a little girl, who’s been infected by a disease that robs humans of their speech.

When they get to the Colonel’s camp, they discover the Colonel has captured all the other apes and is using them as slave labor to build a defensive wall. The Colonel’s men are preparing for an attack by human soldiers from Canada who disagree with the Colonel’s methods.

WAR FOR THE PLANET OF THE APES is an elaborate, carefully made, emotional story, but the conflict is too pat and manipulative. All the humans are ciphers, except for the evil Colonel and one of his privates, who’s conflicted about the Colonel’s harsh treatment of the apes. In the end, Nature destroys the evil humans, and the apes inherit the planet. It’s all designed to lead to the conclusion of the first ape movie in 1968, starring Charlton Heston. As in the first movie, the bad guys are associated with religion and patriotic fervor. In fact, in WAR, when Caesar and his friends get to the Colonel’s camp, the Colonel calls himself “Alpha and Omega, the beginning and the end.” This is the name Jesus calls himself in the Book of Revelation. Also, the Colonel plays the American national anthem when he gathers his troops, who are using the apes as slave labor. Thus, although Caesar’s character arc promotes compassion over revenge and Caesar becomes a Christ figure at one point, the movie’s dominant worldview is Anti-Christian, Anti-American and politically correct. It’s a depressing humanist worldview that advocates the total destruction of the human race.

Humanity, God’s Creation, is the villain in WAR FOR THE PLANET OF THE APES. The only good human is the little girl, who becomes a pet for the apes because she’s been robbed of her intelligence and language skills.