WHAT WE DO IN THE SHADOWS

"What We Do at Night Stays at Night" 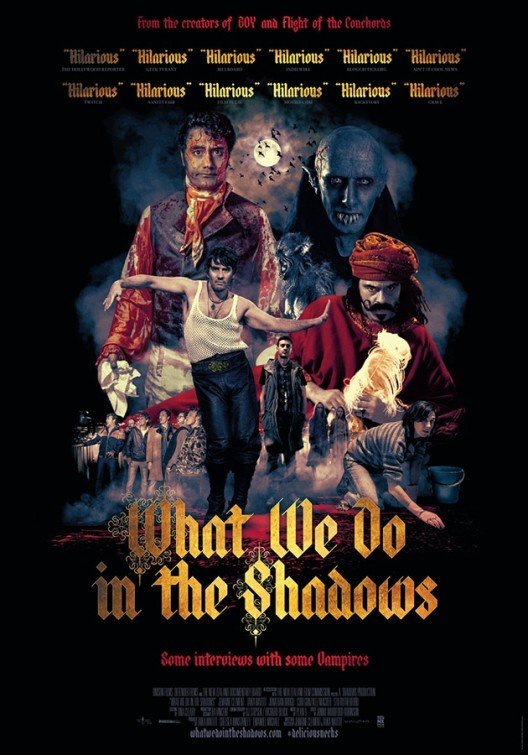 WHAT WE DO IN THE SHADOWS tells the story of three vampires, who are having problems adjusting to life in the 21st Century. Each night the young vampires hit the streets of Wellington, New Zealand, searching for victims to kill. They go to local bars, nightclubs and all kinds of social gatherings, but must avoid sunlight, which is deadly to vampires. Trouble occurs when the group turns the ex-boyfriend of their female servant into a vampire. A rival werewolf gang causes even more trouble.

(RoRoRo, OO, PaPa, AbAb, LLL, VVV, SS, NNN, AAA, D, MM) Very strong Romantic worldview idealizes vampire characters (having the ability to love, display compassion, and do good deeds), with strong occult, pagan elements (including several scenes depicting occult, pagan practices, including orgies), plus a couple blasphemous jokes about Christianity and a crucifix; more than 31 obscenities and profanities (including some “f” words); the level of violence is very high, with several scenes depicting the vampire characters killing innocent human victims by sucking their blood, another scene depicting a vampire attacking a human and accidently transforming him into a vampire, another scene showing werewolves violently attacking a human being and leaving him for dead, vampire vomits up blood, and a physical altercation between vampires occurs during a masquerade party; strong sexual content and references include crude medieval drawings, vampire in bed with several half naked females (implying an orgy has occurred) and one scene with a vampire implies self-abuse in a coffin; extreme nudity in many sexually explicit medieval drawings depicting fully nude characters in sex positions and upper female nudity in one scene; very strong alcohol use and drunkenness, with several scenes showing the vampire characters going to drink at bars and nightclubs and getting extremely intoxicated; a few scenes show background characters smoking cigarettes at bars and nightclubs; and strong miscellaneous immorality, such as a few scenes depicting vampire characters lying to humans in order to trick them into coming into their homes so they can kill them and one scene containing a vampire character admitting he was a Nazi and showing him wearing a Nazi uniform with swastikas and honoring Hitler.

WHAT WE DO IN THE SHADOWS, a comical horror movie, follows four vampires, Viago, Vladislav, Deacon, and Petyr, who share an old home in Wellington, a suburb of Te Aro, New Zealand. Although Viago, Vladislav, amdDeacon are all several centuries old, they have retained normal human appearances, but Petyr, who is 8,000 years old, looks like Count Orlok of NOSFERATU and acts a lot more barbaric.

Each night the young vampires hit the streets of Wellington searching for victims to kill. They go to local bars, nightclubs and all kinds of social gatherings, but must avoid sunlight, which is deadly to vampires. For this reason, they haven’t adapted to life in the 21st Century.

Deacon has a female human servant who desperately desires to receive immortality by becoming a vampire. She leads her ex-boyfriend, Nick, and another young woman to the vampires’ home so that they may suck his blood, but he successfully escapes before they can kill him. As Nick escapes the house, Petyr attacks him and accidently turns Nick into a vampire.

Two months later, Nick is accepted into the gang by the other vampires. They befriend Nick’s best friend, Stu, a computer programmer, who shows the four vampires how to use modern technology. Shortly afterwards, Nick arrogantly reveals that he’s a vampire to humans. This results in Petyr’s death. The group excommunicates Nick and Stu.

Several months later, they all meet at a vampire masquerade party where they reconnect. The other vampires, including “The Beast,” Vladislav’s ex-girlfriend, discover Stu is human and desire to kill him by drinking his blood. Nick and the others protect Stu and escape the party safely. Then, they encounter a gang of werewolves and a verbal altercation occurs. Stu is attacked by the werewolves and left for dead.

In the end, Nick surprises the other vampires by showing up with Stu, who is now a werewolf, and has joined the group of werewolves who attacked him. Finally, the both groups reconcile and become friends.

To its credit, WHAT WE DO IN THE SHADOWS has some hilarious, entertaining moments. For example, it directly pokes fun at all the movies, especially horror movies like THE BLAIR WITCH PROJECT, which involve characters videotaping their actions and interactions. The movie also has some good jokes about popular culture’s depiction of vampires.

However, WHAT WE DO IN THE SHADOWS fails at presenting a meaningful, impactful or memorable story. It’s mostly a collection of scenes that depict vampires acting up. The lack of a cohesive narrative fails to establish a deeper connection for the viewer.

WHAT WE DO IN THE SHADOWS also has an abhorrent Romantic, occult worldview. The vampires are depicted as inherently good, just misunderstood. Also, there’s lots of foul language, crude content and graphic violence.

WHAT WE DO IN THE SHADOWS unquestionably promotes Romanticism. This is mainly due to the fact that the movie opposes the general stereotypes of vampires (ruthless, savages and heartless) that popular culture has created. This movie satirically presents its vampire characters as being inherently capable of goodness and compassion.

Firstly, for example, the vampire characters in this movie befriend a human and desire not to harm him, but actually protect him. Secondly, Viago is madly in love with a female human, whom he followed all the way to Wellington. Lastly, the vampires reconcile with their enemies, the werewolf gang.

In addition to the unacceptable dominant worldview, the artistic and aesthetic worthiness of WHAT WE DO IN THE SHADOWS is mediocre. The movie’s mediocrity mainly stems from the fact that it succeeds at producing laughter in the viewing audience, because it’s funny, but contains no substantive narrative.