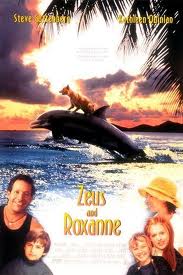 ZEUS AND ROXANNE is an easy-going story that boasts the unlikely scientific phenomenon of inter-species communication between a dog, named Zeus, and a dolphin, named Roxanne. In Key West, Florida, a man named Terry rents an ocean side home with his son, Jordan, and their dog, Zeus. Next door, a divorced mother, Mary Beth, lives with her two daughters and their cat. Terry meets his neighbors when Zeus chases their cat and wrecks their house. Next, Zeus sneaks onto Mary Beth’s boat as she embarks on an excursion to study Roxanne, a dolphin. She discovers that Zeus and Roxanne communicate with one another, and so she applies for a grant to study them. Problems occur when a competing doctor tries to steal the grant, and Terry leaves, taking Zeus with him.

ROXANNE AND ZEUS can be criticized for being too much like other animal stories, but the movie is not scary and does have a lot of morality going for it. Terry and Mary Beth have a chaste romance. The children are obedient. We also learn that you do not get anywhere by cheating and that hard work will return a profit. Two very mild obscenities, two profanities and some action violence mar the film only slightly

Take a little bit of BENJI, a little bit of FLIPPER and a lot of boy meets girl, and you have ZEUS AND ROXANNE. This nonchalant, easy going story boasts the unlikely scientific phenomenon of inter-species communication between a dog, named Zeus, and a dolphin, named Roxanne. Far more likely and winsome is the pairing between Zeus’s owner, Terry (Steve Guttenberg) and Roxanne’s caretaker, Mary Beth (Kathleen Quinlan).

In Key West, Florida, Terry rents an ocean-side home with his son, Jordan, and their dog, Zeus. Terry hopes to finish a rock opera that he is composing. Next door, a divorced mother, Mary Beth, lives with her two pre-pubescent daughters and their cat. Terry meets his neighbors when Zeus chases the neighbor’s cat and wreaks havoc in their house.

Zeus continues to give Mary Beth trouble when he sneaks onto her boat as she embarks on an ocean excursion to study Roxanne, a dolphin. At first, Zeus seems to be barking at Roxanne, but Mary Beth discovers he is trying to communicate with her. This excites Mary Beth, since she is applying for grant money to continue her research. If her grant is not approved, then she will have to find other work.

Back on dry land, Mary Beth pays a visit to Terry and Jordan and asks them if she can take Zeus out on her boat again. They agree, and both families have a pleasant day on the ocean. Terry and Mary Beth even become attracted to each other and agree to go on a date. Their children think this is a great idea since all of them have been missing one parent in their lives.

All seems well for a while, until a competing researcher, Dr. Carver, decides to cheat in order to get the grant money. He sneaks onto Mary Beth’s boat and copies her records. He tries his own skill at getting different species of animals to communicate with a dolphin. He even takes an interest in Mary Beth, and Terry gets second thoughts about the wisdom of pursuing a relationship with her. All seems lost for a while, when Terry and Jordan move away, but when Zeus returns to Key West on his own, father and son must also return. Back in the presence of their dear friends, they face the biggest challenge so far.

ROXANNE AND ZEUS can be rightly criticized for being too much like FLIPPER, BENJI and other animal stories. They usually involve some action, a lost pet and a love interest among the human characters. ROXANNE AND ZEUS is so wholesome and delightful that parents and children should not care that it is derivative. They can be happy that this movie is not scary and does not have many tough concepts to grasp. Instead, it is a simple and breezy story.

One problem with the movie is that children today are weaned on LION KING, ALADDIN and other film fare that packs a lot of action, song and humor into 90 minutes. ROXANNE AND ZEUS takes its time between laughs and action episodes. In fact, the love interest between Terry and Mary Beth seems to be the primary focus of the film. It could be called TERRY AND MARY BETH.

This movie does have a lot of morality going for it. Terry and Mary Beth have a chaste romance. Mary Beth makes a point of telling Terry that she has an extra bed he can use when he unexpectedly has no place to sleep. Jordan is a very good child who obeys Terry. Mary Beth’s children disobey her once, but when they stray too far, Terry is there to rescue them and rebuke them. We learn in this story that you do not get anywhere by cheating and that hard work will return a profit. ROXANNE AND ZEUS will not go down as a memorable movie, but for parents who want a pleasant time on a lazy afternoon, this movie is a safe bet for their children.