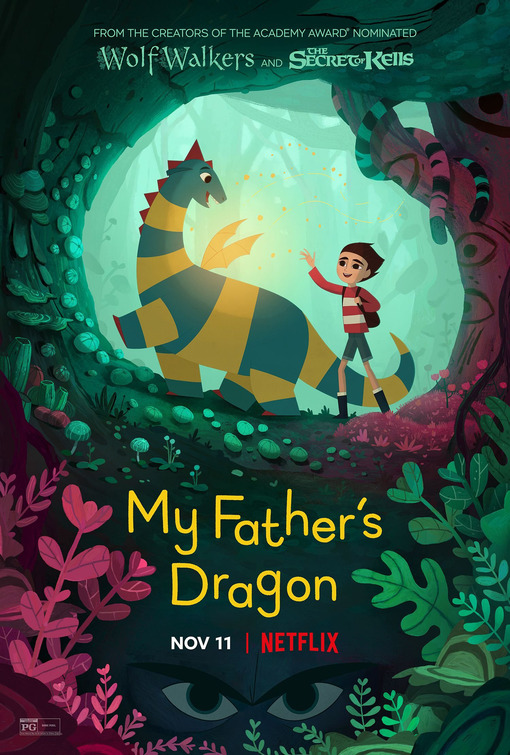 MY FATHER’S DRAGON is a wonderfully animated adventure on Netflix for all ages. The story follows a young boy named Elmer as he embarks on a quest to bring his family out of poverty. After meeting and freeing the young dragon Boris, the two go on a quest on Wild Island to save the animals from drowning and to help Elmer’s family. However, where many characters think they have all the answers, they find out that they don’t always have the best answers to all problems. Ultimately, Elmer learns that the best he can do to help his situation is to first accept his reality for what it is.

MY FATHER’S DRAGON is beautifully animated, the story pacing feels natural, and the characters are loveable and relatable. The music and the voice acting are also clean, crisp and in sync with the movie’s colorful visuals. The animation is colorful and unique, almost like a storybook come to life. MY FATHER’S DRAGON has a strong moral worldview. It teaches truth, honesty, generosity, kindness, perseverance, making your family a priority, personal responsibility, and courage.

(BBB, L, V, M):
Dominant Worldview and Other Worldview Content/Elements:
Very strong moral worldview teaches truth, honesty, generosity, kindness, perseverance, making your family s priority, personal responsibility, courage, facing reality, facing your fears, the idea that kindness and compassion even in the hard times brings the best out in others, and realizing that you don’t always have the answers
Foul Language:
No obscenities, one OMG profanity and a joke about passing gas
Violence:
A few instances of violence such as some bullies attack and rob the hero, hero and his dragon friend run into a mandrill and a crocodile who attack them in an attempt to recapture hero’s dragon friend, an island constantly sinks, and the environment is dangerous and causes peril
Sex:
No sex
Nudity:
No nudity
Alcohol Use:
No alcohol use
Smoking and/or Drug Use and Abuse:
No smoking or drugs; and,
Miscellaneous Immorality:
Light miscellaneous immorality such as a gorilla leader and the hero’s mother lie to their families to protect them from the harsh realities but rebuked, hero’s father is missing, and hero becomes a hypocrite when he lies to two friends, but it’s rebuked.

Netflix has produced yet another unique original family movie in the form of MY FATHER’S DRAGON. If this movie has a comparison, it’s very similar to the stories of Alice in Wonderland, The Phantom Tollbooth, and Spirited Away. It is beautifully animated to tell the story of young boy who not only learns the importance of dreams but also the importance of accepting reality as it is and making the best out of what life sends your way.

The story follows Elmer, a young boy who lives with his single mother as they move to the big city of Nevergreen after a recession has caused them to lose their small-town general store. Elmer’s mother promises they will save enough to get a general store. However, life in the big city and their tiny apartment has caused Elmer’s mother to become overworked and overwhelmed. Elmer’s kindness wins the heart of a talking cat who gives the boy an idea of bringing a real dragon to Nevergreen to earn money.

Elmer then goes on a magical journey to Wild Island, an island ruled by talking creatures that is constantly sinking unless a dragon lifts it out. When Elmer arrives, he meets and befriends a young dragon named Boris who dreams of becoming an “After-Dragon.” The only way to do this is to save Wild Island, but neither he nor the gorilla leader of Wild Island, Saiwa, knows how. Elmer then goes on to meet and befriend other creatures on the island, including a whale named Soda, Iris the Rhino, and two tigers named Sasha and George.

As they travel the island, Boris is convinced Elmer has an answer to everything. However, as Elmer starts to understand his mother and Saiwa more, he realizes he doesn’t have the answers to everything but sometimes the answers he has are the best he could come up with. In the end, Elmer does help Boris accomplish his goals, but Elmer lets Boris return home as Elmer is now ready to face reality and make the best of things.

Generally, MY FATHERS DRAGON has a strong moral worldview. It drives home many morals that are important for children to learn. For example, it extols truth, being generous and kind to everyone even in the toughest of times, making your family’s wellbeing a priority, personal responsibility, having the courage to face your fears, and accepting that it’s okay to not have all the answers. In addition to all this, the story is beautifully animated, the story pacing feels natural, and the characters are all loveable and relatable. The music and the voice acting are also clean, crisp and in sync with the movie’s colorful visuals. All this considered, there are a few moments of cartoon and perilous violence, especially when it comes to some bullies who rob Elmer and an attempt to recapture Boris. These moments aren’t depicted as good, however. In addition, while certain characters do lie and are found to be hypocrites, the lies are portrayed as something bad that causes more problems than they solve. Despite these minor flaws, MY FATHER’S DRAGON shockingly feels like it was plucked from the imagination and woven together with movie magic, a sign that some Netflix movies can still have a sense of wonder and goodness about them.