"You Can’t Steal the Moviegoer’s Intelligence" 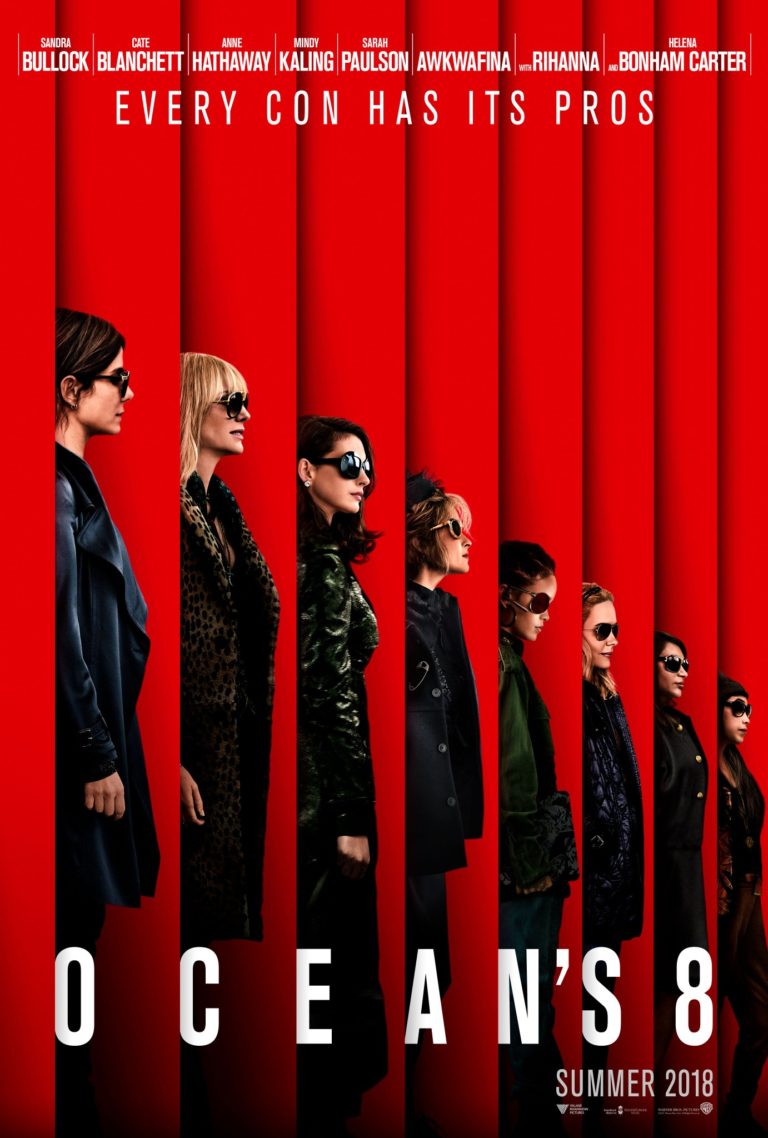 OCEAN’S 8 is a heist spinoff from the 2001 hit remake OCEAN’S ELEVEN, which starred George Clooney as a thief named Danny Ocean. In this movie, Sandra Bullock stars as Danny’s sister, Debbie, who’s released from prison after serving five years. Her new heist is that she’s going to rob a $150 million necklace worn by a famous actress at the star-studded Met Gala in New York City. To succeed, she’ll need a team of women to help her.

As far as heist movies go, OCEAN’S 8 has its entertaining moments, with a terrific cast, and nice twists and turns. However, while it has similar humor to previous OCEAN’S movies, it’s missing the heart that OCEAN’S ELEVEN had, primarily the motivation behind Danny Ocean’s heist, which was to win back his ex-wife. Debbie’s motivation in OCEAN’S 8 is part greed and part revenge. At one point, the cast even says, tongue in cheek, that they’re doing the heist to inspire young girls who want to be criminals. Because of this immoral worldview and some foul language, MOVIEGUIDE® advises extreme caution for OCEAN’S 8.

(PaPaPa, B, LL, V, S, N, A, DD, MM):
Dominant Worldview and Other Worldview Content/Elements:
Very strong pagan worldview extolling stealing, vengeance and greed, with only a light moral element of being loyal to your friends;
Foul Language:
14 obscenities (including two “f” words), and at least nine profanities (including strong uses of the Lord’s name);
Violence:
Women threatens man with a makeshift knife or “shiv”;
Sex:
Implied fornication when woman straddles man in skimpy nightgown, kisses him and handcuffs him to his bed, and the next morning he wakes up alone implying they had intercourse;
Nudity:
Upper male nudity, women wear outfits showing cleavage, woman wears skimpy nightgown, and nude woman in a painting;
Alcohol Use:
Alcohol use;
Smoking and/or Drug Use and Abuse:
No tobacco smoking but there’s discussion of smoking marijuana, and woman smokes something that’s likely marijuana; and,
Miscellaneous Immorality:
Lots of greed, revenge, female protagonist wants to frame her ex-boyfriend for her own attempted crime, and insurance fraud investigator makes compromises.

In this movie, Danny’s sister, Debbie Ocean (Sandra Bullock), is released from prison after serving five years for getting involved in an art selling scam with her boyfriend artist. As soon as she’s released, she reconnects with her old con-partner, Lou (Cate Blanchett), and tells her what their next big heist is going to be, something Debbie has been planning for five years in prison.

The plan is to rob the Met Gala, the most star-studded celebrity fundraiser in the world. Specifically, Debbie is targeting a $150 million necklace that’s going to be worn by world famous actress Daphne Kluger (Anne Hathaway). Debbie and Lou will need a team of five other people to pull off the heist successfully. They’ll need a jewelry maker named Amita (Mindy Kaling), a fence named Tammy (who also happens to be a stay-at-home suburban mom [Sarah Paulson]), a computer hacker named Nine Ball (Rihanna), and a quick hand thief named Constance (Awkwafina). Debbie and Lou also need a famous fashion designer who’s well known but struggling financially. They find just that in Rose Weil (Helena Bonham Carter), who’s on the brink of losing everything. They convince Rose to join their team. They also come up with a clever way to convince Daphne the actress to hire Rose as her Met Gala designer.

The plan is underway, but of course problems arise. However, in true Ocean fashion, Debbie Ocean has surprises up her sleeve that no one expects. The first surprise is her plan to pin their crime on her ex-boyfriend, who was responsible five years ago for her arrest.

As far as heist movies go, OCEAN’S 8 has its entertaining moments, with a terrific cast, and adequate twists and turns. However, while it has similar humor to the previous OCEAN’S movies, it’s missing the heart that OCEAN’S ELEVEN had, primarily the motivation behind Danny Ocean’s heist, which was to win back his ex-wife, played by the talented Julia Roberts. Debbie’s motivation in OCEAN’S 8 is part greed and part revenge, so it’s harder to care about the results of her heist. While the casting is perfect, the dialogue given to the actresses isn’t snappy and witty like the remake or the original movie. Also, there are aspects to the heist that are unbelievably unrealistic, but what heist movie doesn’t have moments like that?

Ethically, OCEAN’S 8 is a mess. At one point, Debbie is giving a pep talk to her team, reminding them that somewhere out there, there’s a little girl dreaming of being a criminal, and they’re doing this crime for her. Though it’s played for laughs, one has to wonder how many children might be inspired to try simple shoplifting methods like they see in this movie. The OCEAN’S remake and its two sequels were just as guilty of such moral failings. Everything done in OCEAN’S 8 is motivated by either greed or vengeance. Finally, there’s also a smattering of foul language, and some suggestive material that requires extreme caution, especially for children.