OF ANIMALS AND MEN

"How the Warsaw Zoo Became a Place of Refuge During Wartime" 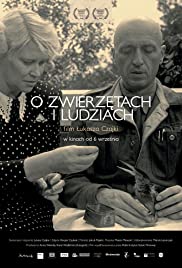 OF ANIMALS AND MEN is a Polish documentary about the Żabiński family, who ran the famous Warsaw Zoo in the 1930s. The zoo became home to elephants, giraffes, zebra, bears, lions, and other animals. When WORLD WAR II began, many of the animals were killed or taken by the German Nazi government. Eventually, the Nazis turned the zoo into land for food for the war effort and community. When the Nazis opened concentration camps, the Żabiński family used the empty zoo to hide, feed and disguise Jews. Through their bravery, the family saved more than 300 Jews.

OF ANIMALS AND MEN is very engaging and illustrates the hardships faced during World War II, just as the 2017 THE ZOOKEEPER’S WIFE did. The documentary contains violence including graphic images of dead animals, animals being hunted and tortured, and air raids. There is a light Christian, moral worldview that promotes compassion, hope, humanity, and courage. The Żabiński family displayed great courage risking their lives to help so many Jews. MOVIEGUIDE® advises caution for OF ANIMALS AND MEN because of the violence in it.

(C, BB, V, D)
Dominant Worldview and Other Worldview Content/Elements:
Light Christian, moral worldview promotes compassion, hope, humanity, and courage, plus family keeps hope that one day they will be able to reopen the zoo, family saves many Jews by hiding them, feeding them and altering their appearance to keep them safe from the Nazis, and family displays courage as they help over 300 Jews jeopardizing their own safety
Foul Language:
No foul language
Violence:
War crimes mentioned, airplanes bomb, dead animals shown, a fallen soldier is shown, a pig is stabbed, and gunshots are fired
Sex:
No sex
Nudity:
Upper male nudity
Alcohol Use:
No alcohol use
Smoking and/or Drug Use and Abuse:
A man smokes cigarettes, but no drugs; and,
Miscellaneous Immorality:
Nothing else objectionable.

OF ANIMALS AND MEN is a Polish documentary about the incredible story of the Żabiński family, who saved more than 300 Jews during World War II by hiding them in the Warsaw Zoo which they ran. OF ANIMALS AND MEN shares countless clips from the war era, with personal accounts told by survivors, and shows the courage of one family who risked their lives to save others, but there is some footage of animals being killed and air raids. The movie shows the rest of the story portrayed in the wonderful 2017 movie THE ZOOKEEPER’S WIFE, starring Jessica Chastain.

The movie starts by showing the Żabiński family running the Warsaw Zoo, which was home to many animals including giraffes, polar bears, elephants, zebras, foxes, seals, and antelopes. Many members of the community enjoyed the zoo and frequently visited.

Rumors about World War II began circulating and employees of the zoo questioned whether they should stay or flee. The war officially began when National Socialist Germany bombed Warsaw in multiple air raids, killing many of the animals in the zoo. Some animals were obliterated to pieces, and others were killed by the shrapnel. The surviving animals were either taken to zoos in Germany or hunted by the Germans.

With the majority of funds being donated towards the war effort, the Warsaw Zoo was deprived of a means to survive. The community members tried to pitch in by donating scraps of food, but it wasn’t enough.

The Żabiński family turned the zoo space into a pig farm, which helped former zoo employees to keep their jobs. However, the Germans didn’t want to keep the slaughterhouse heated during the winter and swine dysentery broke out. The farm officially closed and although an offer was made to restore the zoo, the Żabiński family declined the offer.

Eventually, the zoo was turned into land to harvest food for the war effort and community. More rumors about mass extermination were circulating as Hitler was ordering Jews to be killed. People involved in hiding Jews were also killed, including entire families. As the zoo cages remained vacant, the Żabiński family began hiding their friends who were Jews and eventually strangers. Other people with mental issues also sought refuge at the zoo (the Holocaust actually began when the National Socialists started to murder mentally and physically disabled people).

The Warsaw Zoo took on the name “Noah’s Ark” when it became known that the Żabiński family saved more than 300 Jews from the death camps. During the war, the structure of the zoo had been destroyed. However, the city council in Warsaw donated 4 million dollars towards rebuilding the Warsaw Zoo. While the zoo had to be rebuilt from the ground up, it eventually reopened for the general public to enjoy.

OF ANIMALS AND MEN is very engaging and illustrates the hardships people faced during World War II. The documentary contains some violence, including some graphic images of dead animals, images and animals being hunted and tortured, and air raids. The movie has a light Christian, moral worldview that promotes compassion, hope, humanity, and courage. For example, the Żabiński family keeps hope that one day they’ll be able to reopen the zoo. Of course, they also saved many Jews by hiding them, feeding them and altering their appearance to keep them safe from the Nazis. Surely, the Żabiński family displayed great courage when they risked their lives to help so many Jews. MOVIEGUIDE® advises caution for OF ANIMALS AND MEN because of the violence in it.

Watch OF ANIMALS AND MEN: