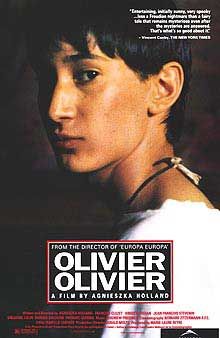 OLIVIER OLIVIER, based on a true French newspaper story, deals with the disappearance of a nine-year-old boy who supposedly is found at age fifteen. However, his sister remains unconvinced, especially when he becomes sexually interested in her. The film is riddled with everything from voyeurism, sodomy and marital sex to teenagers smoking, drinking, stealing, and fornicating. The director willingly compromises for a clumsily developed and orchestrated film.

OLIVIER OLIVIER is an emotionally powerful film based on a true story that writer-director Holland saw in a newspaper. The story surrounds the Duval family who at first seem very ordinary. However, we soon see how quickly a family can become emotionally crippled. The story is set in rural France where a protective mother favors her 9-year-old son Olivier over her 11-year-old daughter. Olivier goes to his grandmother’s house and disappears. Soon, the distraught family self-destructs with guilt and built-up resentment. Years later, a 15-year-old claiming to be Olivier appears, is taken in by the household, but commences a sexual relationship with his sister who questions his identity. Now, a whole new set of interpersonal dynamics operates in the dysfunctional family.

Director Holland seems to be consumed with the darker sides of human nature and willingly compromises for a clumsily developed and orchestrated film. It is almost as if Holland wants to test the audience to see how much perversion and shock element it can accept. From beginning to end, OLIVIER OLIVIER is riddled with everything from voyeurism, sodomy and marital sex to teenagers smoking, drinking, stealing, and fornicating, as well as a crude observation about man’s sin nature leaving the audience with a hopeless impression that this spiritually void and sick family is a grim family representation for the 90’s. This movie will highly offend the moral viewer.