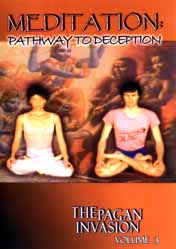 MEDITATION: PATHWAY TO DECEPTION analyzes the influence of neo-Pagan religious systems, particularly Hinduism, on contemporary American culture. The video skillfully presents a biblical response to Hindu teaching. This information equips viewers to share with others involved in T.M. or yoga. Viewers should approach this documentary with caution, because of its extended coverage of Hindu techniques, transcendental meditation, and self-induced screaming tantrums of Bajneesh followers practicing Khunalini Yoga. On the whole, this is a responsible and informative presentation of the dangers of Westernized Hindu practices.

MEDITATION: PATHWAY TO DECEPTION analyzes the influence of neo-Pagan religious systems, particularly Hinduism, on contemporary American culture. For instance, Chuck Smith explains that Westerners embrace reincarnation as a second chance, or an escape from God’s judgement. However, Mahatma Ghandi described reincarnation as “a great burden to bear”–endless transmigration, forever working off an unknown karmic debt, is a frightening reality for the Hindu. Easing another’s suffering is tampering with justice, because each person must work off his own karmic debt. This is the harsh reality of Hinduism, condemning thousands to suffer for hunger and sickness without help.

Regardless of their philosophical repugnance, these techniques are taught to elementary schoolers and practiced in big business and government. These techniques manipulate the body and kill the mind, will and emotions, opening the door to deadly spiritual influences. Viewers should approach this documentary with caution, because of the extended coverage given to actual techniques. However, MEDITATION: PATHWAY TO DECEPTION is a responsible and informative representation of the dangers of Westernized Hindu practices.

Rating: Not submitted to M.P.A.A.