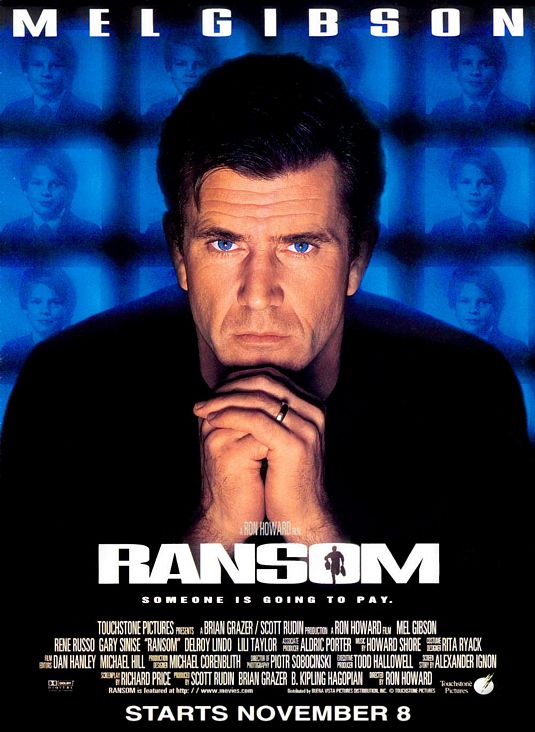 When Tom Mullin's son, Shawn, is kidnapped, Tom offers a ransom to anyone who will find the criminals and bring them to justice. Starring Mel Gibson and Rene Russo, it is a taut and tense thriller that is marred by extensive obscenities and violence.

In RANSOM, Tom Mullin , played by Mel Gibson, has reached the pinnacle of success. He has built a small charter airlines into an aviation empire. He seems to be a nice guy who lives in a beautiful New York City penthouse with his beautiful wife, played by Renee Russo, and his son Shawn. When Shawn is kidnapped, we find out that Tom has enemies. These kidnappers are every parent’s worst nightmare. One is a cop, who is driven by envy to destroy Tom. The FBI seems impotent in their attempts to help Tom. At first, Tom goes along with the kidnappers demands. Then, he decides to stand up to the kidnapper and offers the ransom to anyone who will find the kidnapper and turn him in to the police. A roller coaster of intense brutality and emotion brings us to a surprising climax.

While suspenseful and action packed, the movie is filled with obscenities and profanities not only from the villain but from the heroes. Tom finally realizes he has to do what is right. Both he and his wife come to the point where they cry out to God. The direction is taught and tense. The violence is bloody. However, whether people will want to go out and spend money to see a helpless child kidnapped is open to question.