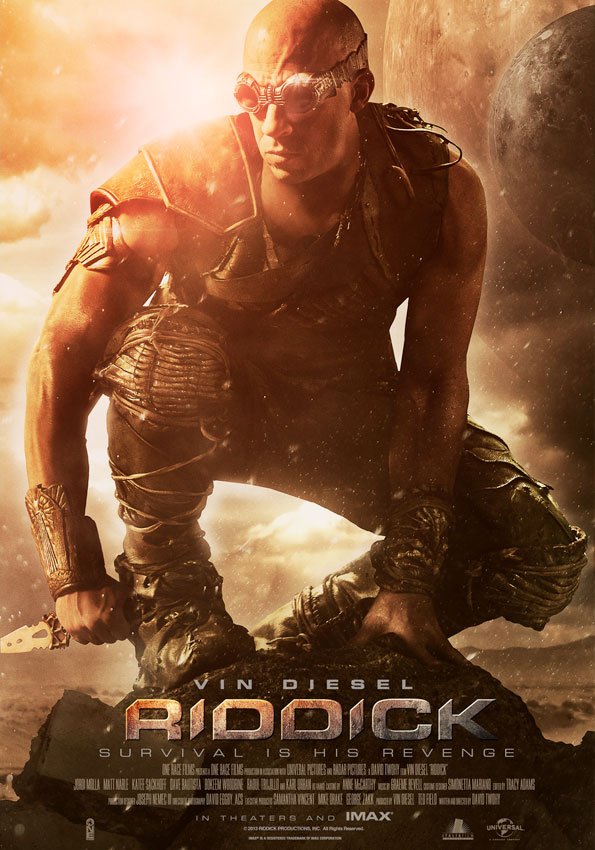 RIDDICK is the final installment in the science fiction action series THE CHRONICLES OF RIDDICK. In it, Riddick, a deadly fighter of a warrior race of people, is betrayed and left for dead on a desolate planet. With no food, water, weapons, and a broken leg, Riddick must turn back to the survivalist instincts he had when he was a convict. Riddick finds a man-made structure with an emergency beacon. He sends out a distress signal with the hope someone will fly down with a spaceship. Someone comes, but it’s a group of bounty hunters that wants Riddick dead.

RIDDICK is an exciting action packed film with stellar visuals. However, a bad story structure and poor character development weigh things down considerably. The worldview is mixed. There are some Christian characters, who cross themselves, read the Bible and recite Scripture. Ultimately though, the hero’s own worldview is pagan. His moral compass is nearly non-existent, but is present just enough so that viewers don’t despise him for his gruesome killings. Overall, RIDDICK is excessive, with foul language, lewd content, and graphic violence.

(PaPa, CC, B, Ho, LLL, VVV, SS, NN, A, MM) Strong, somewhat mixed pagan worldview with some Christian elements, main character is mostly selfish, vulgar, violent, and unrepentant of his wrongdoings, he states to one Christian character to “leave God out of this,” but the supporting character prays, recites bible passages, and says God is protecting him, which turns out to seem true in the plot, plus a homosexual character; over 70 obscenities (mostly “f” words) and four strong profanities, plus multiple sexual references to male and female body parts; very strong action violence, includes man crudely straightening his broken legs and then making a makeshift splint, men are shot and stabbed, one man’s face graphically cut in half, giant monsters stab men with their tails, and men are crushed by giant claws; strong sexual content includes multiple vulgar/crude sexual references (mostly to body parts), a lesbian character, a man tries to rape a woman, but it’s implied he’s unsuccessful, four naked women are seen in a bed together; upper female nudity in two instances, once when a woman is bathing, plus upper male nudity; light alcohol consumption; no smoking or drugs; and, almost every character is an evil, bloodthirsty liar and little to no redemption is seen with them.

RIDDICK is the final installment in the science fiction action series THE CHRONICLES OF RIDDICK. Despite some positive Christian references, the movie is strange, with too much obscene content and a hero who often acts out of self-interest.

In the story, Riddick, the deadly fighter of the warrior race Furya, is betrayed and left for dead on a desolate planet. With no food, water, weapons, and a broken leg, Riddick must turn back to his survivalist instincts he had when he was a convict. After gruesomely fixing his broken leg, Riddick begins preparing for a trek in search for a way off the dangerous planet. To do so, he’ll have to devise a way to kill a scorpion like beast standing in his way. Over time, Riddick slowly builds a tolerance to the scorpion’s deadly venom to the point of it no longer affecting him. He is then able to approach the beast and defeat it soundly.

Roaming the desert plains, Riddick comes across a man-made structure with a distress beacon. He activates it, knowing it will draw bounty hunters who want to see him dead. Two ships land on the planet, one seeking out Riddick for the bounty. The other ship is looking to kill Riddick for a past murder the crew thinks he committed. Riddick, hiding out in the dessert, must figure out a way to get past these heavily armed and trained assassins to get off the planet. All the while, a storm is brewing that will unleash a swarm of hungry monsters on Riddick and the bounty hunters.

RIDDICK is an exciting action packed film with stellar visuals. The CGI monsters and special effects, though over the top, are quite the spectacle. The movie is poorly structured and has little development for the characters, unlike the first movie PITCH BLACK. It also lingers on too long and could have been shortened substantially.

The worldview is mixed. There are some Christian characters that cross themselves, read the Bible, and recite Scripture. As bounty hunters are killed off, one young boy starts reciting Bible passages, stating that angels are protecting him. Surprisingly, he survives in the end. At one point, Riddick tells him to “leave God out of this,” implying that the evil that’s about to take place has no room for faith or God. Though these Christian elements are positive, the worldview of Riddick is pagan. His moral compass is nearly non-existent, but is present just enough so that the audience doesn’t despise Riddick for his gruesome killings. Most of the time, he acts out of self-interest and shows little compassion and no repentance, though he’ll always protect young kids when they’re in danger. Overall, the movie is excessive, containing too much foul language, lewd content, and graphic violence.