SAME KIND OF DIFFERENT AS ME 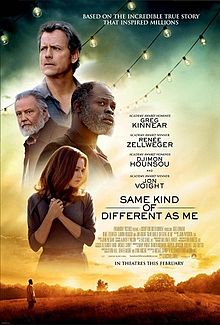 SAME KIND OF DIFFERENT AS ME is a powerful, inspiring drama for teenagers and adults. When her cheating husband, Ron, repents, Debbie Hall starts dragging him with her to help out at the local Christian shelter for homeless people. Debbie tries to befriend a troubled, violent homeless black man named Denver. Ron follows his wife’s lead, but Denver, who suffered years of persecution from white people as a young boy in Louisiana, is suspicious of Ron’s motives. What follows is a miraculous tale of unexpected friendship and faith. Through it all, Debbie’s Christian faith, love and hope inspires both men.

The very beginning of SAME KIND OF DIFFERENT AS ME is a little disjointed, and the ending needs a more focused climax. However, when the movie focuses on the drama involving Denver and a plot twist involving Debbie, it settles into a powerful dramatic rhythm. The movie is extremely well-acted, with marvelous performances from Rene Zellweger, Greg Kinnear, Djimon Hounsou, Jon Voight, and newcomer Ashton Cotton. SAME KIND OF DIFFERENT AS ME is a must-see movie, with valuable lessons about Christian faith and love.

Dominant Worldview and Other Worldview Content/Elements:
Very strong Christian, biblical, moral worldview with references to God, prayer, Jesus, faith, and the love passage in 1 Corinthians 13:1-6, and movie encourages people to see others through God’s eyes, with a strong emphasis on personal transformation through reaching out to God and others with Christian, biblical love and compassion, plus movie extols marriage, repentance, and forgiveness.
Foul Language:
A couple light obscenities.
Violence:
Man swings a bat to threaten people, man smashes an inside glass window with 1 Corinthians 13 on it, man smashes a car window, KKK followers beat a young man, man talks about having to kill someone in self-defense, a character gets cancer.
Sex:
No sex scenes, but husband admits to wife he was cheating on her, but he decides to stop it and stick with their marriage.
Nudity:
No nudity.
Alcohol Use:
Male protagonist’s father has an alcohol problem, is shown drinking and seems a bit drunk in a couple scenes but he eventually quits drinking.
Smoking and/or Drug Use and Abuse:
No smoking or drugs.
Miscellaneous Immorality:
Male protagonist has a troubled relationship with his alcoholic father, father expresses some racist thoughts, and father is mean to other people, but there’s a positive resolution to this subplot.

SAME KIND OF DIFFERENT AS ME is an uplifting, inspiring, powerful drama for teenagers and adults about a woman, who redeems her cheating husband and a troubled homeless man through the power of her Christian faith, love and compassion. Extremely well-acted with many heartfelt moments, SAME KIND OF DIFFERENT AS ME is a little disjointed at the very beginning and could use a bigger, more suspenseful climax at the end, but it tells an inspiring, powerful Christian story that’s a must-see.

The story is told in flashback, from the viewpoint of an international art dealer in Dallas, Texas named Ron Hall. One night at an art gallery fundraiser, a woman tells Ron that, if he doesn’t tell his wife about an affair he’s having, she will. Cut to a big argument between Ron and his wife, Debbie. She gives Ron an ultimatum: Choose me or the other woman, and Ron chooses Debbie. She lays down some rules for Ron, however. Among them are that he must go to church with her and help her serve the homeless people at a local shelter where she donates her time.

At the shelter, Debbie tries to befriend a troubled, violent homeless black man named Denver. Ron tentatively follows his wife’s lead, but Denver, who suffered years of persecution from white people when he lived in Louisiana as a boy and became a hardened man during a prison stint, is suspicious of all the attention coming from these two rich white folk, especially Ron’s motives. What follows, however, is a miraculous tale of unexpected friendship and faith. Through it all, Debbie’s Christian faith, love and hope inspires both men.

The very beginning of SAME KIND OF DIFFERENT AS ME is a little disjointed. The story introduces Ron first, and he begins narrating the story. Then, all of a sudden, Ron and Debbie are arguing about Ron’s betrayal of their marriage vows.

Once the story moves onto the drama involving Denver, however, it settles into a powerful dramatic rhythm, especially when Denver begins to open up to Ron and reveals the suffering he encountered while working as a sharecropper for a white farmer. A couple of plot twists occur during the second act. One of them involves something that happens to Debbie, which adds to the drama involving Denver.

In the third and final act, though, the movie loses some steam and could use a bigger climax. In fact, the biggest climax in the movie comes too early in the third act, a scene where Denver delivers a stirring speech in a church. After Denver’s remarkable speech, the ending tapers off into two separate incidents that are admittedly heartwarming but not quite as powerful and effective. If the beginning and the ending were tweaked a bit, the movie would be a better movie, and perhaps even a great one.

As it is, however, SAME KIND OF DIFFERENT AS ME is still a must-see movie, if only for the excellent work turned in by Rene Zellweger, Greg Kinnear and Djimon Hounsou as Debbie, Ron and Denver. Ashton Cotton is also marvelous as the young Denver, as is Jon Voight as Ron’s troubled, alcoholic father. They all bring a serious but touching flavor of dramatic gravitas to their roles, and to the movie.

In addition, SAME KIND OF DIFFERENT AS ME teaches some valuable, uplifting lessons about faith, love, compassion, purity, and seeing other people through God’s eyes. It encourages people of faith to pass on the torch of faith and compassion that Jesus Christ and His apostles teach in the New Testament. As Galatians 5:6 says, “The only thing that counts is faith expressing itself through love.”

MOVIEGUIDE® advises a light caution for older children because of some story elements and brief foul language in SAME KIND OF DIFFERENT AS ME.

Watch SAME KIND OF DIFFERENT AS ME: