"An Animated Musical Twist on an Old Christmas Classic" 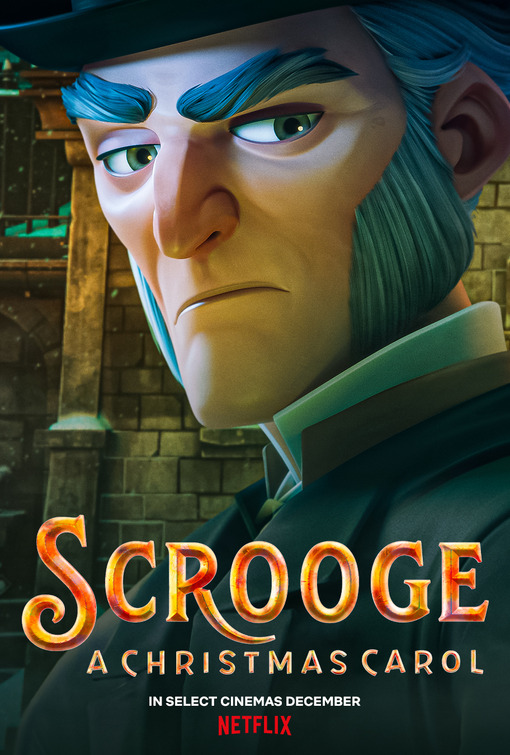 SCROOGE: A CHRISTMAS CAROL is an animated musical version on Netflix of Charles Dickens’ classic novel. The movie follows Scrooge and his dog Prudence as they journey through time to see how Scrooge’s past affects his relationships in the present and how he should change to be better for the future. Over the course of watching Scrooge’s journey, the viewer is treated to colorful, engaging musical numbers. The movie is based on the 1970 musical SCROOGE, starring Albert Finney as the miser who’s visited by three spirits.

This movie is a fun twist on the classic story. The animation is clear and clean with fun colors and interactions between them. The music is engaging and fun as well as emotionally charged. The story is also good at showing the psychology of how a person’s past can affect people’s behavior in the present. SCROOGE: A CHRISTMAS CAROL keeps the original story’s strong moral, redemptive worldview. It promotes generosity, kindness and repentance, with Tiny Tim saying, “God bless us everyone.” The ghosts in SCROOGE: A CHRISTMAS CAROL might be too scary for younger children.

(CCC, BBB, V, AA, M):
Dominant Worldview and Other Worldview Content/Elements:
Very strong Christian, redemptive, morally uplifting worldview about celebrating Christmas in a Christian manner and movie promotes generosity, “treating other people how you wish to be treated,” kindness, repentance, learning to forgive yourself for the things that have happened in your past and to become a better person than you are, Tiny Tim repeatedly says, “God bless us everyone” (there is no mention of Jesus, however), and, though the spirits are called ghosts, they are more like spirits from the Heavenly Host who are trying to save the soul of the grouchy old man
Foul Language:
No foul language, but Scrooge does call Christmas a “Humbug”
Violence:
Light scary violence as title character is visited by four ghosts or spirits, two of whom are the most scary
Sex:
No sex
Nudity:
No nudity
Alcohol Use:
There is some alcohol used, mostly in regard to the Spirit of Christmas Present who seems to overindulge in the pleasures of life, and there are some instances where the spirit seems drunk, but it’s not very clear if he is or not.
Smoking and/or Drug Use and Abuse:
There is no drug usage or smoking in the film.
Miscellaneous Immorality:
Scrooge in the beginning is a greedy miser who overcharges with his moneylending but this is rebuked, Scrooge’s and Harry’s home lives are not typical families, and the biggest issue is the gluttonous Spirit of Christmas Present as his whole thing is about indulging in the present and all the pleasures of life, including food and drink.

A cute and musical take on a classic Christmas special, SCROOGE: A CHRISTMAS CAROL of course follows the story of Ebenezer Scrooge and his journey of redemption. Only this time, the audience is brought into a unique and colorful animated film with spectacular musical numbers. Although where the original novella is a bit dark for children, this version makes the Christmas carol a more child-friendly in its approach. Like all theatrical versions of the story, there are always some differences to make this version stand out among the others.

The story takes place seven years after the death of Jacob Marley, Scrooge’s partner. In this version, Scrooge has an adorable dog named Prudence. Scrooge of course is not popular with the people of London and is discontented with Christmas. After rejecting a Christmas invitation from his nephew, Harry, Scrooge is visited by the ghost of his old mentor, Jacob Marley. Jacob has arranged three other ghosts to show Scrooge what he needs to become a better person.

The three ghosts are the candlelike Ghost of Christmas Past, the jovial, indulgent Ghost of Christmas Present, and the silent reaper of the Ghost Christmas Yet to Come. After the ghosts visit Scrooge during the night, will he see the error of his ways and become a better person with a love for Christmas and a much more generous heart?

SCROOGE: A CHRISTMAS CAROL is very beautifully animated. All the characters are vibrant and colorful, even the ones that are unique to this film. For example, the novella had Scrooge’s nephew and sister were named Fred and Fran, but in this version they are Harry and Jen. As mentioned before, joining Scrooge on this fantastical journey through time is his and Marley’s dog Prudence. In addition, the way the animators show the parallels of Scrooge’s painful past and how he could help change it for his present and future. In addition, the musical numbers are all well timed, enjoyable and emotional. They bring a new sense of magic to the somewhat dismal tale.

Overall, the story is not that different from the Dickens novella. SCROOGE has a strong redemptive, moral worldview promoting generosity, kindness, repentance, and not letting our past mistakes hold us back. The other moral that this version brings is a lesson that living a life of financial security isn’t truly living. The only cause for concern regarding SCROOGE: A CHRISTMAS CAROL is that the ghosts can be scary to younger children. That said, it’s not an overwhelming concern regarding this more family-friendly movie version.