SELF MADE : INSPIRED BY THE LIFE OF MADAM C.J. WALKER: Bootstraps 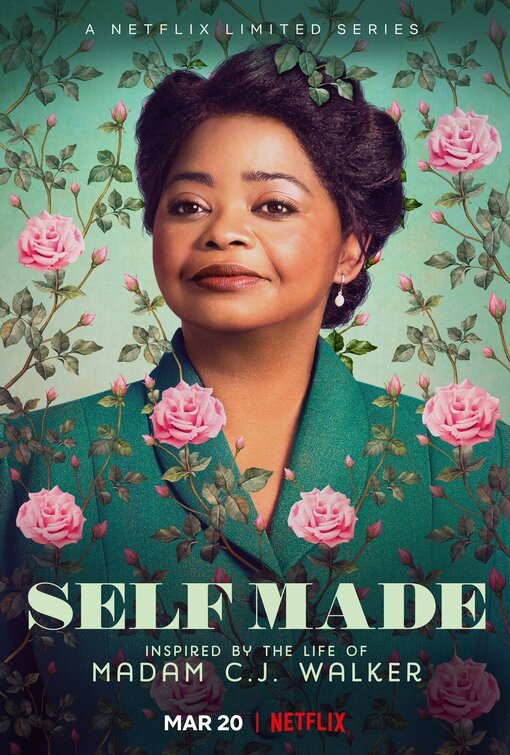 In the episode “Bootstraps” of the Netflix series SELF MADE, which is about a black female entrepreneur in the early 1900s, Sarah Walker is successfully growing her company in Indianapolis and gaining respect from her community. However, she finds it difficult to succeed in a business world dominated by men. Sarah wants to build a factory for her haircare products and open hair salons in other cities. She tries to get an endorsement from Booker T. Washington, the national leader of the African American community. Meanwhile, her son-in-law decides to divulge company secrets to Sarah’s rival, Addie.

“Bootstraps” is an entertaining, inspiring episode of SELF MADE. It shows new entrepreneurs they should continue to fight for their businesses no matter what obstacles get in their way. Also, Sarah says she’s doing the Lord’s work and claims, “Dreams are God’s way of showing us His plans.” “Bootstraps” has a light moral, strong pro-capitalist worldview, but it also contains brief foul language, marital conflicts and a homosexual situation where a young woman is attracted to Sarah’s adult daughter. So, MOVIEGUIDE® advises caution for older children.

(B, CapCap, C, Fe, FR, RH, Ho, L, V, S, A, M):
Dominant Worldview and Other Worldview Content/Elements:
Light moral, strong pro-capitalist worldview promotes perseverance overcoming prejudice against women, with some Christian and feminist elements about a churchgoing woman trying to grow a successful business in a man’s world and overcoming different challenges, with references to doing the Lord’s work, being blessed by God, a comment that “dreams are God’s way of showing us His plans,” women come to the aid of a businesswoman desperately needing investors, but there’s a false comment that “God helps those who help themselves,” two women experience problems in their marriages, husband proves to be unreliable in carrying out tasks but woman is also a little too obsessive about her sole ownership of the business which hurts her husband’s feelings, self-respect and pride, there may be some revisionist history in the movie’s depiction of Booker T. Washington’s attitude toward women in one scene, and another woman shows a homosexual interest in the businesswoman’s adult daughter
Foul Language:
Four obscenities, three GD profanities and one light profanity
Violence:
Man threatens to shoot another man
Sex:
Husband makes some light sexual allusions to his wife about their evening together as she leaves the house the next morning to do some things and a young woman clearly has lesbian designs on married young woman in a troubled marriage
Nudity:
No nudity
Alcohol Use:
Alcohol shown at a party
Smoking and/or Drug Use and Abuse:
No smoking or drug use; and,
Miscellaneous Immorality:
Some lying, betrayal, criminal numbers banker rigs some winning numbers without one of his gambling client’s knowledge so he can become the investor in a woman’s profitable business instead, and this creates problems for the man who just wanted to support his female boss by investing in her business, and a man agrees to spy on the business that his wife helps her mother run for the mother’s business rival.

SELF MADE is a TV series on Netflix about African American entrepreneur Madam C.J. Walker, the first woman to become a self-made millionaire in the early 1900s.

In the second episode, “Bootstraps,” Mrs. Sarah Walker is growing her haircare company and wants national black spokesman Booker T. Washington to endorse her product so she can convince people to invest in a new factory. This episode is entertaining as well as inspiring. It shows that people should continue to fight for their dreams no matter what obstacles get in their way, but there is also some foul language, marital problems and a budding lesbian situation.

As the episode opens, the Walker family has moved to Indianapolis, and Sarah’s hair growth product is becoming popular. Therefore, Sarah’s new goal is to find investors for her company so she can open a factory and make more product. A group of investors meet her at a factory on which she has put a down payment, but they decide not to invest because she’s a woman.

Sarah realizes her business aspirations may become difficult to achieve because all the investors and businessowners are men. She comes up with a plan to try to impress Booker T. Washington so that he will give her an endorsement and investors will be interested. However, Sarah’s business rival, Addie, hears this information from Sarah’s son-in-law and beats Sarah to the punch.

At the convention where Booker T. Washington is speaking, there are only men in the auditorium. Sarah tries to convince Washington’s wife to put in a good word for her, but his wife refuses to meddle in his business. Washington’s wife is unmoved, even after Sarah presents a passionate argument to her and her friends. She still believes women should stay in the background.

Of course, that’s not really Sarah’s way. So, on the last day of the convention, after Sarah’s husband fails to convince Washington to come to dinner, Sarah decides she will go talk to Booker T. Washington herself. She marches on stage and gives a speech about her business and aspirations to lift up the black community by also lifting up black women. Sadly, Washington isn’t impressed. He believes haircare products are “frivolous” and thinks it’s better to lift up the black man first. So, he tells Sarah he won’t give her an endorsement.

Sarah and her husband are on the verge of losing their down payment on the factory building when help comes from an unlikely source.

“Bootstraps” is an entertaining, inspiring episode of SELF MADE. It shows new entrepreneurs they should continue to fight for their businesses no matter what obstacles get in their way. Also, Sarah tells people she’s doing the Lord’s work and says, “Dreams are God’s way of showing us His plans.” “Bootstraps” has a light moral, strong pro-capitalist worldview, but it also contains brief foul language, some marital conflicts and a homosexual situation where a young woman is attracted to Sarah’s adult daughter. So, MOVIEGUIDE® advises caution for older children.