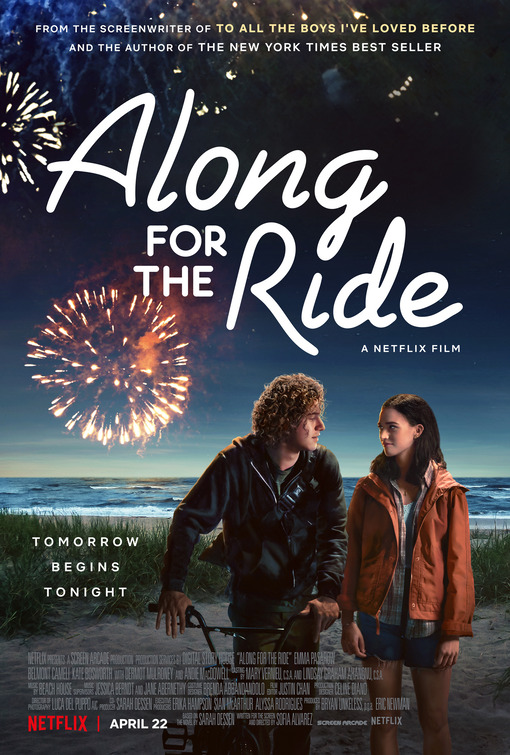 College-bound Auden goes ALONG FOR THE RIDE for summer vacation to the small seaside town of Colby. There, she hopes to reconnect with her father and break free from her dull life. Her mother seems reluctant to let Auden leave, but her overly exuberant stepmom is eager for her company. Meanwhile, Auden’s father is busy working and avoids any interaction. Auden meets Eli, a BMXer and fellow insomniac. Eli wants to help Auden try new things. As the teenagers embark on nightly escapades, they develop feelings for each other. However, they both have secret personal hurts too painful to discuss.

Streaming on Netflix, ALONG FOR THE RIDE is relatively engaging, with excellent production values and good acting. The story develops at a slow pace, but this makes sense given the story’s setting. ALONG FOR THE RIDE has a light moral worldview. It explores healthy ways to overcome personal hurts and conflicts through friendship and family. However, there are several obscenities and about 15 light profanities. Also, two scenes contain brief politically correct references to homosexuality. MOVIEGUIDE® advises caution for older children.

(B, Ho, PC, LL, V, S, N, A, M)
Dominant Worldview and Other Worldview Content/Elements:
Light moral worldview takes a pro-family approach to resolving family tensions and miscommunications, promotes friendship and explores healthy ways to resolve or overcome past hurts and friction in relationships (teenager discovers that, by helping a friend, he can overcome his grief over another friend’s death), but there’s one brief reference to one friend being interested in a same-sex relationship and teenage girl and boy mention homosexuality and both agree that sexuality is a “spectrum,” so this scene is politically correct
Foul Language:
Five obscenities and 15 profanities
Violence:
A food fight occurs
Sex:
Two references to homosexuality, one character makes a reference to breast implants, another one to nipples, two teenagers wake up in the back of a pickup at dawn implying that they slept together during the night but there’s no indication they ever took off their clothes, three girls dance to a “booty shaking” song, and there’s one kiss between teenage boy and girl
Nudity:
Upper male nudity at the beach
Alcohol Use:
One woman drinks wine at lunch, one character in story was killed by a drunk driver, and teenagers drink from plastic cups at the beach, “cheering” each other as if they’re drinking alcohol Smoking
Miscellaneous Immorality:
Trespassing, lying.

College-bound Auden goes ALONG FOR THE RIDE for summer vacation to the small seaside town of Colby hoping to reconnect with her dad, Robert (Dermont Mulroney), and to break free from her straightlaced, strict “good girl” persona. Victoria (Andie MacDowell), Auden’s mother, appears reluctant to allow her daughter to leave. Meanwhile, Auden’s overly exuberant stepmother, Heidi (Kate Bosworth), invites her to work in her boutique because Heidi’s overwhelmed with being a new mom. Auden’s dad steers clear of his fatherhood duties, because he’s locked away in his office working on a book manuscript.

Heidi encourages Auden to go to “The Tip,” the teenage beach hangout. As part of her desire to explore new things, Auden decides to go and meets a fast-moving Cassanova wannabe. Before long, Auden and the boy are kissing when Auden abruptly stops, realizing that this isn’t what she wants to do. The boy asks if she’s a lesbian. Auden denies she is, but they both agree that sexuality is a “spectrum.” Auden leaves the party when three other girls talk negatively about her.

Auden soon discover the girls at the party are her co-workers at the boutique. In her reserved standoffish way, Auden doesn’t mingle with the three girls, whose names are Maggie, Victoria and Leah. She observes the girls’ nightly routine to dance to a “booty shaking” song.

Later that night, Auden, a declared insomniac, gets a coffee at the corner store and goes to the pier to read a book. A boy rides his bicycle up and down the pier around the poles. Auden takes notice.

Auden and the bike riding boy, Eli, start talking. Eli learns about Auden’s desire to try new things she hasn’t done. He dubs her turn toward adventure “The Quest” and offers to help her with this Quest. As the teenagers embark on the nightly escapades, they develop feelings for each other. However, they both hold back on personal hurts that are too painful to discuss. Eli offers to teach Auden to ride a bike, but she lies and says she knows how to ride a bike already.

The remainder of The Quest takes viewers along for the ride as Auden discovers who she is and learns to rely on friends and family. Throughout the ups and downs of the journey, she learns to value friendship with Eli and Maggie and express her feelings regarding her past hurts.

Now streaming on Netflix, ALONG FOR THE RIDE is relatively engaging, with strong acting. The production values are excellent. Though the storytelling happens at a slower pace, this makes sense given the story’s time frame and setting.

In many ways, ALONG FOR THE RIDE explores healthy ways to resolve or overcome past hurts and friction in relationships. For instance, Auden learns to ride a bike, though she asks Maggie to teach her instead of Eli. Also, Auden calls her mother to ask for help, and her mother admits she’s jealous of Heidi, the stepmother. Finally, Eli discovers that, by helping Auden, he can overcome his grief over another friend’s accidental death. ALONG FOR THE RIDE also takes a pro-family approach to resolving family tensions and miscommunications.

Thus, ALONG FOR THE RIDE has a morally positive worldview. However, as noted above, two scenes contain references to homosexuality. The movie also has several obscenities and about 15 light profanities. There are also some references to alcohol use and death by drunk driver. One scene features boys without shirts as everyone runs to the beach for a night swim. The night swim scene features a kiss between Auden and Eli. The beginning of one scene shows Auden and Eli waking up in the back of a pickup at dawn, implying that they slept together during the night, though both are always shown wearing clothes. There’s no explicit reference to them having sexual relations, so the issue is left ambiguous. Also, one character makes a reference to breast implants, and another one to nipples.

MOVIEGUIDE® advises caution for older children for ALONG FOR THE RIDE.