"The War Behind the Curtain" 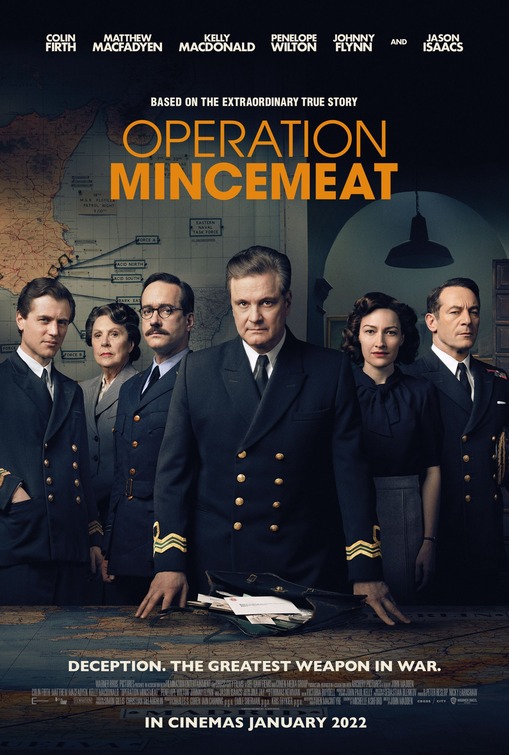 OPERATION MINCEMEAT is based on the true story of two British Intelligence officers, Montagu and Cholmondeley, in World War II. The two officers head up a top-secret operation to misdirect the German military and save thousands of lives ahead of the Allied invasion of Sicily. Despite resistance from the military authorities, Prime Minister Winston Churchill approves the operation, which involves planting misleading papers on a corpse. Some problems arise, however. The two men and their team must pray that the pieces of their espionage mission fall into place.

OPERATION MINCEMEAT is an entertaining look behind the curtain of the world of espionage and misdirection during World War II. The movie balances romance, comedy and drama well, but tends to focus on an internal drama between Montagu and Cholmondeley over a woman involved in the mission. OPERATION MINCEMEAT has a strong moral worldview about fighting for freedom and features several scenes of prayer and Scripture reading. However, it also has some light sexual content, a graphic autopsy scene of a dead body and strong but brief foul language. MOVIEGUIDE® advises extreme caution.

(BB, PP, CC, ACAC, Ho, L, VV, S, A, D, M):
Dominant Worldview and Other Worldview Content/Elements:
Strong moral worldview with patriotic and Christian elements, scenes of prayer and quoting scripture, allies fight for freedom against the National Socialist tyranny of Hitler, and movie highlights the sacrifice of men and women in war and the importance of trust in a world of spies and deception, and some homosexual seduction
Foul Language:
Three “f” words and six profanities
Violence:
No bloody violence, but many conversations of death, war and injury, the plot revolves around making an already dead corpse appear drowned, but movie contains a graphic autopsy scene where a man pulls out the intestines of a dead man (while graphic, there is no blood due to the man’s body already being decayed)
Sex:
Implied fornication, a man considers being unfaithful to his wife but is stopped, a man pleasures another man in exchange for information (this scene is not graphic, extremely brief and both men are fully clothed)
Nudity:
No nudity
Alcohol Use:
Alcohol throughout
Smoking and/or Drug Use and Abuse:
Characters smoke cigars, but no drugs; and,
Miscellaneous Immorality:
The nature of the movie means there’s lots of deception, lying and distrust.

OPERATION MINCEMEAT is a World War II drama based on a true story about two British intelligence officers, Ewen Montagu (Colin Firth) and Charles Cholmondeley (Matthew Macfadyen), who sought to misdirect the German military’s attention away from the Allied Invasion of Sicily.

The movie begins at the apex of the operation, as Allied troops prepare to storm the beach of Sicily. As Montagu, Cholmondeley and their team pray and await the telegram that will let them know if their operation is successful, the movie cuts to six months earlier.

Montagu hosts a retirement party and says goodbye to his son and wife, who fly to America to stay safe. The party ends up being a cover to Montagu’s new job, a top-secret operation to misdirect the German military in an effort to save thousands of Allied troops.

The movie introduces Cholmondeley, who suggests that the centerpiece for deception would be what he calls “Operation Trojan Horse.” The operation involves British Intelligence hiding fake documents on a dead body whose parachute failed, to direct the German military away from Sicily. While his Admiral is skeptical, Montagu defends Cholmondeley’s plan, and the two men team up to plan the risky operation.

After some amendments to the operation, Montagu and Cholmondeley change the name to its now famous title, “Operation Mincemeat.” Not only do they find a dead body to use for the operation, but the team also crafts a meticulous backstory for the dead man.

Cholmondeley requests the assistance of Jean Leslie, a woman who works in the British intelligence office. They decide to use her picture to help forge a relationship for the decoy. Through a love letter, Jean’s picture and the top-secret documents, Montagu and Cholmondeley devise a successful decoy.

However, their Admiral is still skeptical that the operation will work. Not only do they receive pushback from the authorities, but an internal drama arises. With the lives of thousands of Allied troops relying on the operation’s success, Montagu, Cholmondeley and their team must pray that the pieces of their espionage mission fall into place.

OPERATION MINCEMEAT is an entertaining look behind the curtain of the world of espionage and misdirection during World War II. The movie balances romance, comedy and drama well, but tends to focus on the internal drama between Montagu, Cholmondeley and a common love interest, in Jean Leslie. OPERATION MINCEMEAT has a strong moral worldview about fighting for freedom and features several scenes of prayer and Scripture reading. However, it also has some mild sexual content, a graphic autopsy scene of a dead body, and strong but brief foul language. So, MOVIEGUIDE® advises extreme caution.

OPERATION MINCEMEAT is having a limited run in theaters but is now streaming on Netflix.