THE LINCOLN LAWYER (2022): Season One Overview 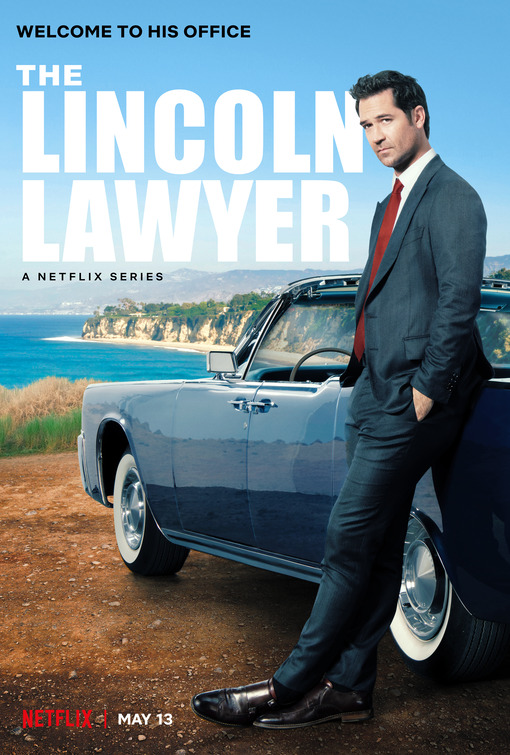 THE LINCOLN LAWYER is a Netflix television series based on a series of mystery thrillers about an unconventional lawyer in Los Angeles. The lawyer, Mickey Haller, is a defense attorney who works out of two Lincoln Town Cars so he can save on expenses and concentrate on serving his clients while someone drives him. Based on the second LINCOLN LAWYER novel, the first season starts with Mickey being given the cases of a lawyer friend who was murdered. The cases include a high-profile murder trial of a wealthy video game mogul, who says he found his wife and her lover shot dead in their bedroom.

THE LINCOLN LAWYER tells a captivating story. It has lots of drama and clever plot twists. Superbly acted, written and directed, it features a fine performance by Manuel Gar-cia-Rulfo as the title character. The first season ends on a strong positive note. The guilty people get their just desserts, and the innocent people go free. However, MOVIEGUIDE® advises extreme caution for THE LINCOLN LAWYER because of strong foul language and references to violent crime, adultery, prostitution, corruption, and homosexuality.

OVERVIEW REVIEW: THE LINCOLN LAWYER is a Netflix television series based on one of a series of mystery thrillers about an unconventional lawyer in Los Angeles where the lawyer is assigned all the cases of a friendly colleague who was murdered, including a murder trial involving a wealthy video game mogul, who says he found his wife and her lover shot dead in his and his wife’s bedroom. The first season of THE LINCOLN LAWYER is most entertaining and superbly acted, written and directed, with strong moral elements and a powerful reference to Easter in the season finale, but it has strong obscenities and profanities throughout, plus references to violent crime, adultery, prostitution, corruption, and homosexuality.

The first season of THE LINCOLN LAWYER is based on THE BRASS VERDICT, which is the second Lincoln Lawyer novel by acclaimed crime fiction novelist Michael Connelly, whose novels now regularly hit the New York Times Bestseller list. The hero of the Lincoln Lawyer novels is an unconventional defense attorney in Los Angeles named Mickey Haller. In the first novel, which was made into a 2011 movie starring Matthew McConaughey, Mickey was seriously wounded at the end by the killer. The second novel picks up a year later, with Mickey recovering from a painkiller addiction because of his wounds. He gets called into the office of an important judge who oversees defense lawyers and tells him that a lawyer friend of his was just murdered but left all his cases to Mickey if Mickey he wants them.

The new LINCOLN LAWYER series changes some of these details, including the names of the dead lawyer’s clients. Since the TV series is picking up Mickey’s story from the second novel, it pretends the events of the first novel didn’t take place. So, the first episode opens with Mickey having suffered a surfing accident where he almost died. He gets called into the office of the presiding judge in Los Angeles County, Judge Mary Holder. She in-forms him that Mickey’s murdered friend, a defense attorney named Jerry Vincent, bequeathed all his cases to Mickey, who has a reputation as a brilliant defense attorney. Mickey’s reputation has become tarnished because of his addiction after his accident. However, Mickey’s sober now and in recovery for several months. So, Judge Holder turns the cases over to Mickey but warns him she will be monitoring his progress closely.

Mickey agrees to take over his friend’s practice, especially because, when he died, his friend was handling a high profile murder case involving a wealthy video game creator, Trevor Elliott, who claims to be innocent. It’s a high stakes gamble, because if Mickey loses the case, it will irreparably damage Mickey’s legal reputation. However, if he wins the case, Mickey’s legal career will be even better than before his accident. Of course, Mickey still has to convince Trevor to let him remain his lawyer.

Mickey manages to do that, but Trevor causes problems from the start. The biggest problem is that Trevor doesn’t want Mickey to ask the judge for a continuance in his trial, which is about to begin the jury selection process. Trevor tells Mickey he’s on the verge of finalizing a sequel to his company’s most popular video game, whose main character is a woman patterned directly on Trevor’s dead wife, who helped Trevor create the coding that made the video game such a great success. Trevor is afraid the deal for the sequel won’t go through if his murder trial is delayed much longer. Mickey reluctantly agrees to Trevor’s demand and works hard to get up to speed.

While Mickey deals with Trevor’s case, he has to handle Jerry’s other cases. They include a man arrested by police after firing a bunch of rounds in a nearby park the night before the morning when Trevor’s wife and her lover were murdered.

Also, Mickey’s trying to get back in the good graces of his first wife, Maggie McPherson, a longtime prosecutor in the District Attorney’s office. They divorced because of their conflicting workaholic approach to their cases, Maggie on the prosecution side and Mickey on the defense side.

As Mickey works on Trevor’s case, he discovers that one of the approved male jurors has been bribed to rule in Trevor’s favor. Trevor claims it was one of his investors, a shady criminal with a lot of money at stake if Trevor’s convicted. Mickey’s investigator, Cisco, starts to check out the story, but the juror doesn’t show up one day, and the issue becomes moot. However, Mickey and Cisco discover that Mickey’s current Lincoln has been bugged, and the detective investigating Jerry’s murder warns Mickey that his life may be in danger. The detective’s warning to Mickey starts to look serious when the investigator working for Jerry, Trevor’s first attorney who was murdered, turns up dead.

Meanwhile, Mickey’s first wife, Maggie, is trying to put a major human trafficker in jail. She has a witness against him, but her witness also turns up dead.

THE LINCOLN LAWYER tells an engrossing, captivating story. It has lots of courtroom drama, with clever plot twists and exciting jeopardy. Superbly acted, written and directed, it features a really fine performance by Manuel Garcia-Rulfo as the Lincoln Lawyer. Although he’s now inherited his friend’s law office, Mickey is more comfortable working out of his two Lincoln Town Cars. There, he can read up on his cases and think about them while one of his innocent but often unemployable clients drives him across town interviewing people and visiting courtrooms. As he says in one episode, “I think better on the road.” The other actors in the series also do very well. They include Neve Campbell as Mickey’s first wife, Christopher Gorham as the wealthy video game creator, Becki Newton as Mickey’s secretary and second wife, Angus Simpson as Mickey’s investigator and fiancé to Mickey’s secretary, Krista Warner as Mikey’s daughter, and Jazz Raycole as Mickey’s new driver, a recovering heroine addict whom Mickey got released from an old drug charge.

The first season of THE LINCOLN LAWYER ends on a strong positive note. The guilty people get their just desserts, the innocent people go free, and the flawed good guys experience some redemption. In the final episode, while he celebrates a positive redemptive out-come to one of his cases, Mickey tells his driver that, like other children, Christmas was his favorite holiday, but his mother, who was a Christian, always reminded him that Easter was more important.

It should be noted, however, that the novel on which the series is based had less foul language and no homosexual content. Even so, the author who writes these novels, Michael Connelly, writes for an adult, mature audience. His novels usually contain morally uplifting, redemptive content and values, but they take place in a dark world of crime, sin, murder, and human foibles.