"Protecting the Innocent from the Merciless" 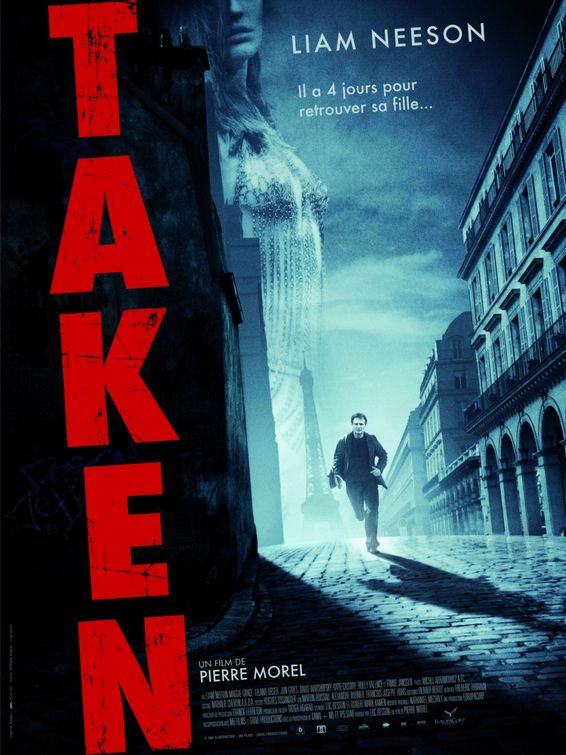 TAKEN is a spy thriller starring Liam Neeson as Bryan Mills, a retired spy who has moved to Southern California to be closer to his 17-year-old daughter, Kim. Reluctantly, he agrees, pressured by his ex-wife, to let Kim and her friend, Amanda, visit Paris for a few weeks. The first day they arrive in Paris, some white slave traders from Albania kidnap them. Bryan goes into action in Paris to track down his missing daughter and save her before the evil Albanians sell her off to the highest bidder.

TAKEN is a rousing, straight-ahead chase thriller. The hero, and the movie, takes no prisoners as he frantically hunts down the men who kidnapped his daughter. From the beginning, the movie shows the hero to be a caring father trying to make up for all the times his spy job took him away from his daughter. While in Europe searching for her, however, he is a bit too cold and brutal at times. This makes his character seem a little less heroic and, coupled with the movie’s foul language, merits extreme caution. Even so, this is an engaging thriller about a father who loves his daughter.

TAKEN is a straight-ahead action thriller about a retired spy who has to use his skills to save his daughter from some scuzzy white slave traders in Paris.

Liam Neeson stars as Bryan Mills, who has retired from the spy business to be closer to his 17-year-old daughter, Kim, now living with his ex-wife and her new husband in Southern California. Bryan reluctantly agrees to let his underage daughter go to Paris with her girlfriend, Amanda, even though Kim and her mother lied to Bryan about Amy and Amanda traveling around Europe following the band U2’s new tour.

Of course, the first day they arrive in Paris, Kim and Amanda meet Peter, who is actually working for white slave traders from Albania. Peter’s evil friends kidnap Amy and Amanda, and Bryan records the kidnapping through Amy’s cell phone.

“I will look for you, I will find you. And I will kill you,” he tells the head kidnapper who picks up Kim’s phone. “Good luck,” the kidnapper tersely replied.

Bryan hops a plane to Paris and begins looking for his daughter. He finds Peter, but a speeding truck accidentally kills Peter while he’s running away. So, Bryan starts looking for Kim in a couple places. Can he find her before the Albanians sell her off to the highest bidder?

TAKEN is a rousing, but violent, chase thriller. Though estranged from his daughter and his ex-wife, Bryan is shown from the beginning to be a caring father trying to make up for all the times his job as a spy took him out of the country. While in Europe searching for his daughter, however, Bryan shows the rough aspects of his character. A couple times he is a bit too cold and brutal, showing no mercy to the merciless villains who took his daughter and her friend. This morally problematic content makes his character seem a little less heroic and, coupled with the movie’s foul language, merits extreme caution. Even so, this is an engaging thriller with a somewhat sympathetic hero who does all he can to save his victimized daughter.