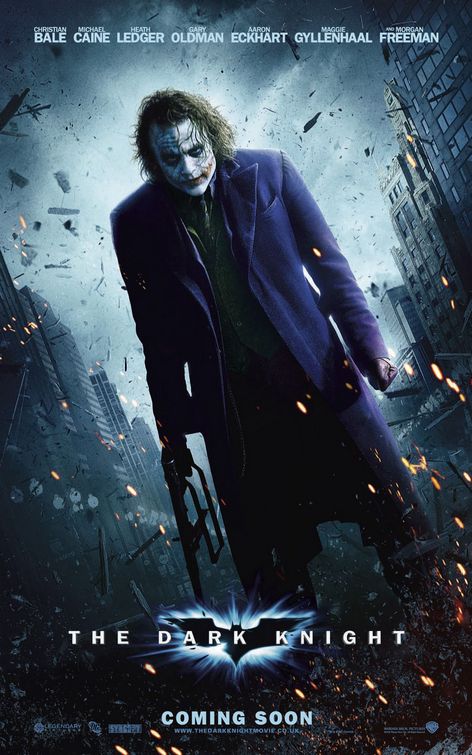 THE DARK KNIGHT, the new Batman, is full of emotional moments, but its plot, characters and dialogue fail to make a cohesive whole. The story starts off with much promise. There’s a new criminal in Gotham City challenging the mobs. The Joker is ruthless, senseless and chaotic, a true psychopath. At the same time, there’s a new good guy on the scene, Harvey Dent, the District Attorney. With Batman and Detective Gordon’s help, he indicts a courthouse full of mobsters. The Joker, however, has a deadly plan that will bring tragic consequences for Harvey Dent, Batman aka Bruce Wayne and Rachel, the love of Bruce Wayne’s life who has fallen for Harvey Dent.

Some interactions between the characters in DARK KNIGHT are brilliant emotional moments, but they don’t hang together cohesively. Because of this and other problems, the movie’s last 20 minutes are tedious. Also, the Joker character does not change, so it becomes monotonous watching him on the screen. The movie’s worldview also lacks cohesion. It’s a mixed one that ends on a morally relative, deconstructionist note. It suggests a hero can be a liar without tarnishing his heroic qualities.

(PaPa, FR, BB, CC, Ro, CapCap, LL, VVV, S, N, AA, M) Very confused and eclectic, or mixed pagan, philosophical and political perspectives ending on a relativistic, deconstructionist “truth does not matter” sentiment, with some strong moral references to good versus evil, the mindless destructiveness of total evil, justice, crime fighting, and citizens decide not to let villain destroy their sense of what’s right and wrong, a redemptive reference to we need God now and some references to Jesus, solid Romantic refutations of order and discipline but sometimes rebuked, some extolling of vigilante activity, but wealthy capitalist, conflicted vigilante hero forsakes murderous revenge for justice and captures the villain instead of killing him, but, otherwise, not a very cohesive worldview; eight mostly light obscenities such as use of the “h” word and four profanities, three of which are exclamatory; very strong and intense action violence and threats of violence, but very little blood or gore actually shown except for a few notable exceptions, thus people are constantly beat up, people are shot through the head, Joker takes a knife to threaten to cut people’s mouths open, people are blown up, people thrown off buildings, people burned alive, but the camera cuts away from most of these instances, but the almost skeletal scary side of the face of Two Face is shown and the scars of Joker are shown, plus chase scenes and fight scenes; fairly mild discussions of sex, though one person is remembered for being interrupted while having sexual relations, and another mostly dressed couple is interrupted in a bedroom; upper partial male nudity; lots of alcohol use, one man drinks to get drunk and avoid responsibility; no smoking; and, criminal activity and hero decides to lie to solve plot problem and police commissioner agrees with him.

Evidently, the current creators of BATMAN found this approach intriguing because the movie is full of emotional moments, some of which are great, to the neglect of plot, character and dialogue. Thus, Batman in THE DARK KNIGHT does not go through a character arc and (SPOILER ALERT) does not even seem to wince when the love of his life is killed in the middle of the action, and the Joker does not go through a character arc. People who like emotive moments, video games and eye candy will walk out satisfied, but people who like to be touched by the story and the characters will be disappointed. (SPOILER) And, what will women think when Batman loses the love of his life and does not seem upset for very long?

DARK KNIGHT starts off with much promise. There’s a new criminal in Gotham City challenging the mobs. He is ruthless, senseless and chaotic, a true psychopath. He sends his goons to rob a mob bank. He tells each goon to finish off the goon who completes his job, first the driver, then the safecracker, then the bagman so that only Joker leaves alive. He tells the mob that he will get rid of their biggest problem, Batman, after driving a pencil through a mobster’s head to show his cruel superiority.

At the same time, there’s a new good guy on the scene, Harvey Dent, the District Attorney. With Batman and Detective Gordon’s help, he arrests the Chinese mob leader, Lau, who has been the lead banker for all the mobsters. Using Lau’s information, Dent is able to indict a courthouse full of mobsters.

Batman, aka Bruce Wayne, thinks Harvey may be able to solve the crime problem so that Batman can get back together with his beloved, Rachel. Rachel, however, has fallen in love with Harvey.

The Joker leaves a clue that he’s going to kill the judge, the police commissioner and Harvey Dent. (SPOILER ALERT) In his chaotic, psychotic way, Joker kills the judge, kills the commissioner in a crowd of policemen, kills Rachel, and causes Harvey to lose half his face so that one side of his face looks like a skull and tendons. This causes a psychotic break in Harvey, who turns into a villain himself.

Batman makes it his goal to capture Joker. He almost goes over the top and becomes a vigilante, especially when Joker wires two ferries to kill innocent people.

Movies with two villains often have problems, because once you finish with the first villain, you have to defeat the second villain, which is almost like a second movie. Thus, for those who don’t revel in exciting eye candy, the last 20 minutes of this movie become tedious. As said, some of the interactions between the characters are brilliant emotional moments. They have been used to make good ads and YouTube clips of the movie, but they do not hang together cohesively. Upping the ante on emotional moments can bring fatigue. What works traditionally is a plot point early on in the movie to propel it in a different direction and a plot point introduced in the third act. The Batman script has one noticeable plot point in the middle and several repetitious plot beats. Joker is psychotic and mean from the beginning. He’s shown to be psychotic and mean several times. A little character growth would have helped him a great deal. Those who think playing psychotic and mean is great acting will love this role. They may want to look back at Jack Nicholson’s Joker, who has more of a haunting, lasting impression because of his deep-seated humor in the midst of real pain and suffering.

The music, sound effects and special effects are very good. These are some of the best explosions in movie history. THE DARK KNIGHT is not a very bad movie, although it seems to suggest in no uncertain terms that a hero can be a liar without tarnishing his heroic qualities. This is not a movie for children or young teenagers who may pick up scripts of bad behavior, however, though they probably will flock to the movie. Parents must take a strong stand, therefore, and not let their children and teenagers succumb to media hype. From our point of view, consider renting BATMAN BEGINS, the first movie in this incarnation of the caped hero, instead. It’s a much better scripted, acted and directed movie.