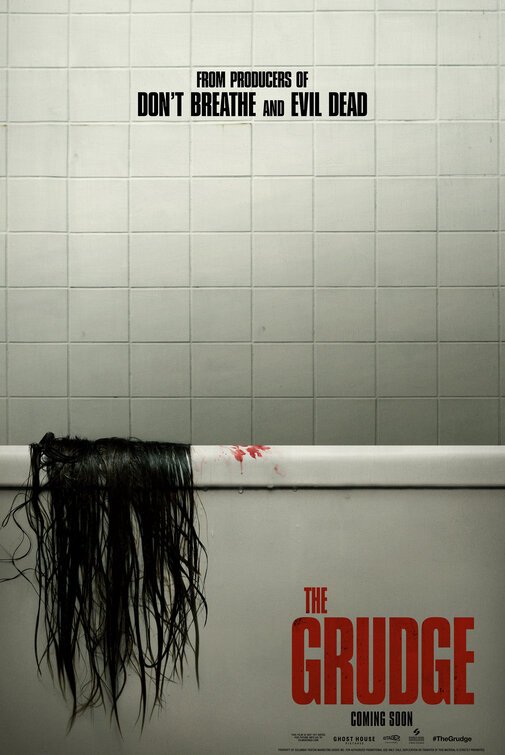 THE GRUDGE is a remake about a cursed house. Anyone who enters the house will suffer a violent death. There are several storylines with a series of perfectly timed, and extremely violent, jump scares. Rookie Detective Muldoon and her partner are sent to investigate the mysterious death of a woman found in her car. Muldoon follows some leads back to the cursed house, which has a history of violent, gruesome murders and suicides. More gruesome violence ensues.

The acting by Andrea Riseborough, who plays Detective Muldoon, is so good that most viewers will want to see her solve the case. However, the plot often reminds viewers that the story makes no sense. THE GRUDGE has some pro-life messages in a couple subplots. Also, the Catholic detective has a picture of Jesus and Mary in her car. The rest of the movie, however, is thoroughly occult. An inescapable curse is part of the main plot. There are also multiple ghosts who violently attack living people. Some strong foul language and plenty of gruesome violent scenes complete the abhorrent picture that is THE GRUDGE.

(OOO, FRFR, C, B, LL, VVV, N, A, D, M):
Dominant Worldview and Other Worldview Content/Elements:
Very strong occult view that evil and death are in complete control of humanity, including an inescapable curse is part of the main plot and movie accepts the false occult idea that there are ghosts with some light Christian, moral elements such as a picture of Jesus and His mother and some rosary beads in a detective’s car (implying that the woman is Catholic), a crucifix on a wall and some pro-life messages (a couple decides to love their child no matter what, and a “ghost” complains that her husband was going to kill her by “assisted suicide”)
Foul Language:
15 obscenities (five “f” words), one string profanity and two light profanities
Violence:
Very strong and strong, sometimes gruesome and always scary, violence includes a character tries to commit suicide and shoots himself in the head off screen, and another character is shown holding his bloody body afterwards, there’s a deadly implied stabbing, and the next morning the victims bloody body is shown, and the perpetrator’s head is shown under water as if the perpetrator drowned, suicide victim survives and is shown with his disfigured head from trying to shoot himself, but he later gouges out his own eyes and dies, a woman sees horrifying monsters who try to kill her, a character is attacked by two ghosts, a character has a deadly fall, another bloody ghost attacks a woman twice, a character has a bloody vision of another murder and suicide
Sex:
No sexual content
Nudity:
Brief upper male nudity in two scenes
Alcohol Use:
Detectives drink alcohol but no drunkenness
Smoking and/or Drug Use and Abuse:
Smoking in two or three scenes but no drugs; and,
Miscellaneous Immorality:
Husband tries to kill his wife because she’s ill, and a detective drops a case because he’s too afraid to solve it.

A remake of a remake, THE GRUDGE is a horror movie about a curse. The curse is born when someone dies in a powerful rage. Once you encounter the curse, it never lets you go until you die a violent death, often involving murder.

Fiona Landers is the first to be infected with this curse when she’s away on business as a live-in nurse in Tokyo, Japan. A violent murder occurs in the home where she works. Fiona senses something’s wrong, because she sees horrifying monsters who try to kill her. So, she goes home early to Pennsylvania to be with her family. She seems ecstatic to return to her loving family in a small town on 44 Reyburn Drive.

Two years later, a rookie female police detective named Muldoon and her son move to Pennsylvania after Muldoon’s husband dies of cancer. They begin a new life in a new city. Detective Muldoon and her partner, Detective Goodman, are sent to investigate the mysterious death of a woman who’s found in her car after two years. The young Detective Muldoon follows some leads back to 44 Reyburn Drive.

Detective Goodman wants nothing to do with the house on 44 Reyburn Drive because his former partner went insane and shot himself in the face, after going into the house. Subsequently, Goodman drops the investigation. However, Muldoon enters the house to discover another murder. She talks to a woman who chops off her hand in front of her. Muldoon wants answers.

We discover that the woman who chops off her hand in front of Detective Muldoon is a former resident of the home, who was about to be euthanized by her husband, Mr. Matheson, before she violently killed him. The mysterious woman in the car accident is identified as an “expert” suicide medium who boasts of helping 44 victims kill themselves. The haunted house is even too much for a professional killer, so she flees in her car and is gruesomely killed by Mr. Matheson’s the ghost.

After some digging, Muldoon discovers the realtor, Peter Spencer, who sold the house to the Mathesons, killed his visibly pregnant wife, Nina, and then himself after his encounter with “the curse.” In another series of flashbacks, the movie reveals the details. A doctor informs the Spencers that their baby has a serious brain disorder. The two discuss and consider a late-term abortion. After much struggle, Nina declares she will love her child no matter what. The two are very happy in an emotional scene, before Peter violently kills his wife and child, leaves them in a pool of blood and then drowns himself in the bathtub.

Muldoon continues to investigate. Detective Goodman inform her about his previous findings and the fate of his dead former partner. Muldoon laughs off the notion that the house is cursed, even though she sees several scary dead people. She doesn’t back down. After a few more gruesome encounters, Muldoon decides she must go back to the house on 44 Reyburn Drive and destroy the ghost of Fiona Landers.

THE GRUDGE has several storylines with a series of almost perfectly timed, but extremely violent scares. The acting by Andrea Riseborough, who plays Detective Muldoon, is so good viewers will want to see her solve the case. However, the plot often reminds viewers that the story makes no sense.

THE GRUDGE has some nice pro-life messages in THE GRUDGE. A couple decides to love their sick child no matter what, and a woman complains her husband was going to kill her by “assisted suicide.” Also, there is a picture of Jesus and His Mother Mary and rosary beads in Detective Goodman’s car, along with a crucifix on the wall.

However, those are the only signs of anything good or positive going on in the supernatural world. The rest of the movie is thoroughly occult. An inescapable curse is part of the main plot. There are multiple ghosts in the movie who violently attack living people. Finally, the reality of death in THE GRUDGE is depicted as eternal torment, evil, suffering, and horror. This is in stark contrast to the Christian belief in eternal happiness promised by belief in Jesus Christ, our Divine Savior (John 3:16).

THE GRUDGE also has some strong foul language. The violence is often extreme and very bloody. Finally, the movie reaches a new low when it shows the graphic violent murders of two young children by their parents. Even with a few positive elements, nothing can save THE GRUDGE from being an abhorrent, horrific piece of “entertainment.”