THE MAN FROM TORONTO 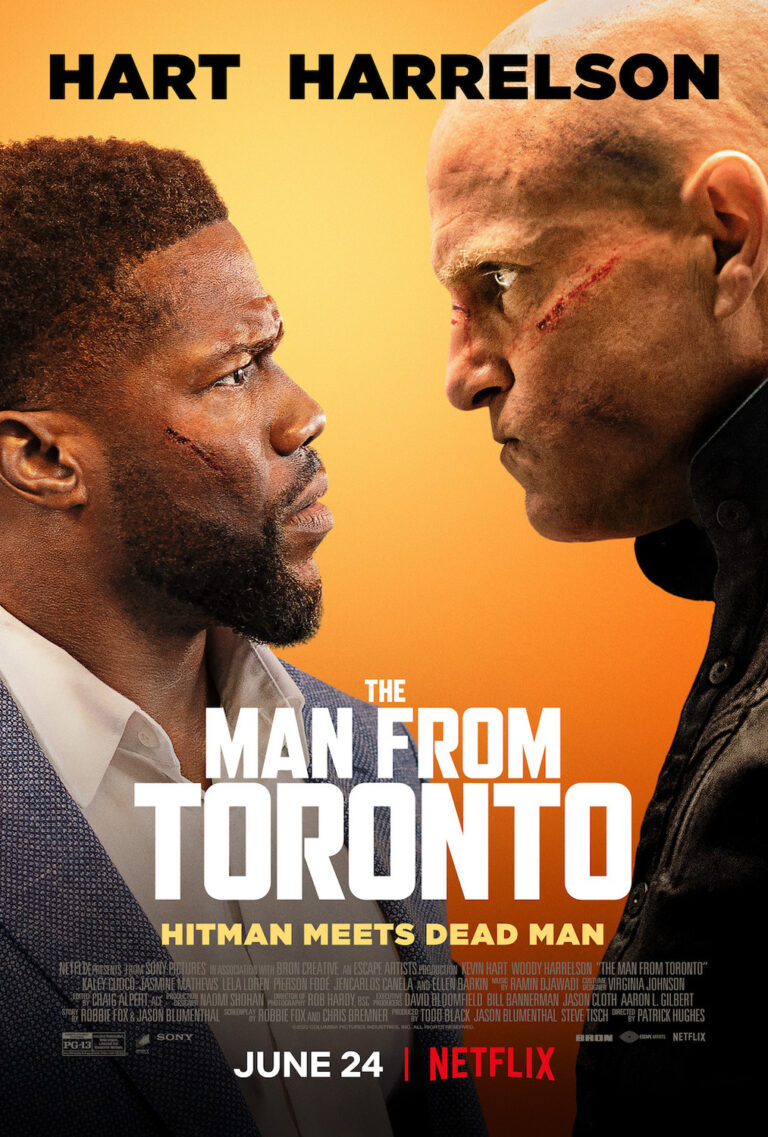 THE MAN FROM TORONTO is an action comedy on Netflix with hilarious interplay between stars Kevin Hart and Woody Harrelson. Hart plays Ted, a loser who makes workout videos that go disastrously wrong to promote the gym where he works. He and his wife want to have a baby, but his oddball business ideas are annoying. Ted plans a romantic getaway together, but FBI agents mistakenly label him The Man from Toronto. So, they force Ted to try to capture a rogue Venezuelan general planning to attack America. Meanwhile, the actual Man from Toronto just misses the chance to catch up to the agents before they grab Ted. He and Ted race to outwit each other, but eventually team up.

THE MAN FROM TORONTO masterfully blends amazing and inventive action sequences with great characters and comic dialogue to provide some outstanding entertainment. The movie has a strong moral, patriotic, pro-family worldview, but there’s frequent foul language and some intense violence. THE MAN FROM TORONTO has no explicit sex or nudity, however. It delivers a rock-’em, sock-’em good time, but MOVIEGUIDE® advises extreme caution.

(BB, PP, LLL, VV, S, N, A, M):
Dominant Worldview and Other Worldview Content/Elements:
Strong moral, pro-family, patriotic, Pro-American worldview in an action comedy
Foul Language:
At last 31 obscenities (including one “f” word), one Jesus profanities, five GD profanities, 11 light profanities, and two vulgarities
Violence:
Lots of action violence, often played for laughs, most of it strong, but some of it intense and excessive, though not bloody or gory, such as spy kills and maims many people, two men are attacked by villains with axes and hatchets and a chainsaw and one man decapitates one villain offscreen with chainsaw, blows to the head, man beaten to death with a golfclub, explosions, train hits a car, threats of torture, man’s thumb deliberately cut off off-screen
Sex:
No explicit or implied sex but there’s a joke about making a baby and a reference to lubricant
Nudity:
Upper male nudity in one scene
Alcohol Use:
A man pops two bottles of champagne, but no one drinks them
Smoking and/or Drug Use and Abuse:
No smoking or drugs; and,
Miscellaneous Immorality:
Man lies to his wife for comical purposes, and lots of people double-cross and lie to each other.

THE MAN FROM TORONTO is an action comedy on Netflix about a loser who’s mistaken for the world’s meanest assassin (known to everyone only as The Man from Toronto) and dragged into a dangerous mission by the FBI to capture a Venezuelan terrorist with all sorts of people out to kill him. With hilarious interplay between stars Kevin Hart and Woody Harrelson, THE MAN FROM TORONTO takes the mistaken identity premise of Hitchcock’s NORTH BY NORTHWEST and turns it into an exciting, patriotic laugh fest, but there’s lots of foul language and intense violence, so extreme caution is advised.

MAN kicks off with YouTube videos of Ted (Hart) trying to make workout videos that go disastrously wrong to promote the gym where he works. Ted and his wife want to have a baby, but she’s more annoyed by his incessant oddball business ideas than attracted to him.

So, Ted plans a romantic weekend getaway in a remote woodlands AirBnb, only to accidentally go into the wrong one and instantly get labeled by the strangers inside as “The Man From Toronto.” They expect Ted to torture a man into revealing information. He humorously succeeds without even touching the guy. Meanwhile, the actual Man is racing toward the cabin, but just misses the chance to catch up to Ted as Ted is grabbed by FBI agents, who force Ted to go to Puerto Rico, leaving his unwitting wife behind.

Ted’s forced mission is to meet and capture a rogue Venezuelan general who tried a coup in his country but was stopped by American intelligence. The general has plans to attack the United States. The FBI agents believe Ted is the Man from Toronto and the only person who can accomplish the mission.

Ted starts the mission against the general, but the actual Man keeps trying to step in and grab the general, because he has a $2 million payday riding on the mission. As Ted and the Man race to outwit each other, an oddball chemistry between them grows. This leads them to team up.

Can they complete the mission even as other anonymous assassins arrive to kill them? Will America be saved? And, can Ted win back his wife’s affections?

THE MAN FROM TORONTO masterfully blends amazing, inventive action sequences with great characters and comic dialogue to provide an outstanding piece of entertainment. While the movie’s clearly aimed at teenagers as well as adults, MOVIEGUIDE® advises extreme caution due to frequent foul language and some intense violence. However, THE MAN FROM TORONTO has no explicit sex or nudity and provides a strong moral, patriotic worldview.

Watch THE MAN FROM TORONTO: