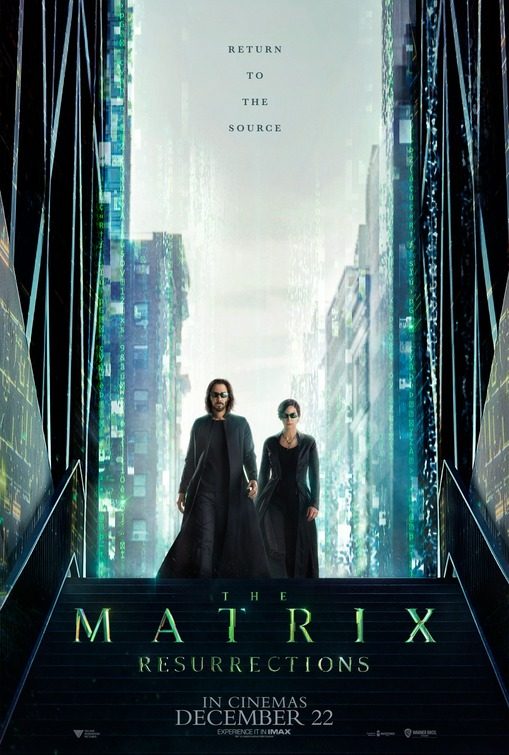 THE MATRIX RESURRECTIONS is the third sequel to the hit movie THE MATRIX. In the new movie, the machines have resurrected Neo and his beloved, Trinity, and trapped them in a new Matrix world. A new machine entity is now controlling the machines and has broken the peace that Neo established between humanity and the machine city. Neo manages to free himself from the new Matrix. With help from surviving remnants of humanity, he must rescue Trinity and save humanity from the new threat.

THE MATRIX RESURRECTIONS gives moviegoers a new trippy experience, especially in the movie’s first part where the hero and heroine are trapped in a new imaginary Matrix. The new movie also has lots of exciting action and some emotionally powerful scenes that focus on the power of love. In the end, love conquers tyranny. That said, MATRIX RESURRECTIONS doesn’t display quite the same level of creativity found in the first three movies. Also, it has lots of strong foul language, some excessive violence and a Romantic, slightly politically correct worldview that supports the idea of creating one’s own utopia.

(Pa, RoRo, BB, C, ACAC, PC, LLL, VVV, N, A, M):
Dominant Worldview and Other Worldview Content/Elements:
Mixed pagan worldview with strong Romantic elements promoting the idea that human beings can and should create the reality and utopian world of their own desires, mixed with strong morally uplifting, light redemptive elements where love defeats a tyrannical, apparently sentient machine entity that wants to manipulate and control all humans (including their minds) and destroy the free, secret human underground city they’ve established on an Earth’s suffered significant damage to its solar atmosphere, plus the movie’s Romantic vision seems to be a bit politically correct and support a leftist vision of equity and also seems to implicitly support the leftist identity politics of the movie’s creator and director, a man who underwent sex reassignment therapy
Foul Language:
About 24 obscenities (including two “f” words, many “s” words and some “h” words), four GD profanities and seven light profanities such as OMG
Violence:
Some extreme action violence with blood and lots of strong action violence includes many people shot, explosions, intense martial arts fighting, people crash into objects, people are force-pushed away in the Matrix, hero is able to stop bullets in the Matrix and shields the heroine form being hit by them, some people in a new Matrix world are shown to be avatars of machine
Sex:
No sex scenes or sexual immorality, but the machine entity controlling the Matrix has given the heroine a husband and three children to manipulate her
Nudity:
Upper male and rear male nudity in two scenes
Alcohol Use:
Brief light alcohol use
Smoking and/or Drug Use and Abuse:
No smoking or drugs; and,
Miscellaneous Immorality:
Deceit and manipulation, but rebuked, and there’s a couple references to the theme of Free Will versus Destiny that is part of the first three MATRIX movies, but the new movie doesn’t resolve the issue.

THE MATRIX RESURRECTIONS is the long-awaited third sequel to the hit movie THE MATRIX and shows Neo and his girlfriend Trinity facing a new nemesis, and avatar who’s taken over the machine world and is trying to enslave humanity again in another imaginary world. THE MATRIX RESURRECTIONS gives moviegoers a new trippy experience, with lots of exciting action and some emotionally powerful scenes that focus on the power of love, but most of its characters don’t display quite the same level of creativity found in the first three movies, and the movie has lots of strong foul language, some excessive violence and a Romantic, slightly politically correct worldview that supports the idea of creating one’s own utopia.

In the last movie, MATRIX REVOLUTIONS, Trinity and Neo died, but not before Neo established peace between the humans and the machine world. In the peace settlement, the Machine World’s leader, led by a human avatar calling himself the Architect, agreed to let any human who wanted it to leave the Matrix.

The new movie opens with Neo, whose name in the Matrix world is Thomas Anderson, somehow being “resurrected” and trapped in a new Matrix. In this new Matrix world, Neo has lost his memory of what happened before, but he has fleeting visions of the past. In this new world, Neo and his Matrix identity, Mr. Anderson, are now video game creators of a trilogy of games called The Matrix. However, Neo feels something is wrong about this world and about the man who runs the video game company, a Mr. Smith. His boss, Mr. Smith, has Neo seeing a psychiatrist.

According to the analyst, Neo’s visions of the past recently caused him to suffer a mental breakdown, based on a confusion between what’s real and not real. Neo’s sessions with the analyst are meant to control that confusion.

Neo is even more confused by the appearance of a woman who looks just like the woman his alter ego created in the Matrix video games. The woman keeps appearing at the coffee shop Neo likes to visit. He starts having conversations with her and learns that her name is Tiffany and she’s married with three children.

Meanwhile, some agents from the real world, including Neo’s old friend, Morpheus, are trying to wake up Neo and get him to take the red pill. If they can get him to do that, they can locate his physical body in the machine city, which has somehow been resurrected and imprisoned again in the pods that the machines use to run their city and create the new Matrix world.

Eventually, they do awaken Neo and retrieve his body from the pods. However, Neo insists that they also rescue Trinity from the new Matrix and locate her body, which also has been resurrected. However, the entity who created and operates the new Matrix and now rules the machine city intends to stop them by any means necessary.

THE MATRIX RESURRECTIONS gives moviegoers a new trippy experience, especially in the movie’s first part where the hero and heroine are trapped in a new imaginary Matrix. As noted above, in the new Matrix world, the hero’s identity has been transformed into that of a video game creator. As such, he created a trilogy of video games that are a recreation of the first three Matrix movies created by the Wachowski brothers in our world. Seeing the Neo character in this movie have confusing visions of the first three movies is pretty trippy, in a good way. It’s also rather fun, though this part of the movie goes on a little too long.

As with the first three movies, THE MATRIX RESURRECTIONS has lots of exciting action. Moviegoers who enjoy the first three movies will enjoy the new movies action scenes for the most part, although the new action scenes don’t present anything really new as far as MOVIEGUIDE® can see. One thing that is new and fun in the new movie, though, is seeing the Trinity character come into her own as a heroic figure. She has a few fun new moments in the movie’s climax that viewers haven’t really seen from that character.

That said, most of the characters in the new movie don’t display the same level of creativity as the first three movies. There are no weird villains like the Merovingian or the albino ghost twins, for example. However, Neil Patrick Harris makes an indelible impression as Neo’s analyst, who has a big secret that he’s hiding from his patient. Also, though, the new movie has two new actors playing Morpheus and Mr. Smith, and they just don’t make as big an impression as Laurence Fishburne and Hugo Weaving did in the first three movies.

On the positive side, THE MATRIX RESURRECTIONS has some emotionally powerful moments. Those moments revolve around the love that Neo and Trinity share in the story. In fact, it’s their love that eventually saves the day and defeats the entity who’s now controlling the machine city and who’s behind the oppressive new Matrix world. This gives the movie a morally uplifting premise of love conquering tyranny. (The director has said in interviews that she wrote the new MATRIX script as a tribute to her father and mother after they died.)

However, the movie’s ending strongly implies that the power of Neo and Trinity’s love also gives them a power to create a utopian world, a Matrix of their own device. Thus, the ending also has a strong Romantic quality about it, which envisions a world where human beings can and should create the reality and utopian world of their own desires. This begs the question, however, what’s the difference between the utopian world they want to create versus the world that the movie’s villain is trying to create? Of course, the script’s assumption is that the world the hero and heroine would create is one where people would have the free will and freedom to pursue their own dreams, desires and happiness. The villain, however, wants to create a world where he controls every human being.

Many of today’s leftists want to tear down today’s world to build some kind of new utopia. However, their visions of such a utopia are usually, if not always, rather half-baked. Even worse, they always seem to end up with just another tyrannical hierarchy that creates other forms of oppression. This can be seen throughout history, such as the history of the Soviet Union and the histories of Mao’s Communist China and Castro’s Communist Cuba.

Here, it’s interesting and important to note that the remnants of humanity in the movie who have escaped the Matrix and escaped the machine city’s pods have established a rather drab world where everyone is equal. Also, the secret city where the humans are hiding from the new entity controlling the machine city is actually a soft military dictatorship run by a female soldier form the second MATRIX movie, who’s now a general. The general is depicted as a benevolent but firm leader. She’s at first opposed to Neo’s plan to rescue Trinity, because it might expose the hidden city’s location to the evil machines who’ve broken the peace that Neo established with the machines in the third MATRIX movie. She relents, however, when a leader from a faction of machines who still maintain the peace with the humans appeals to her.

THE MATRIX RESURRECTIONS also has lots of strong foul language, including two “f” words and four GD profanities. In addition, some of the violence is a little too extreme and bloody.

All in all, therefore, MOVIEGUIDE® advises extreme caution for THE MATRIX RESURRECTIONS.