THE OTHER SIDE OF THE DOOR

"All She Had To Do Was Keep the Door Closed" 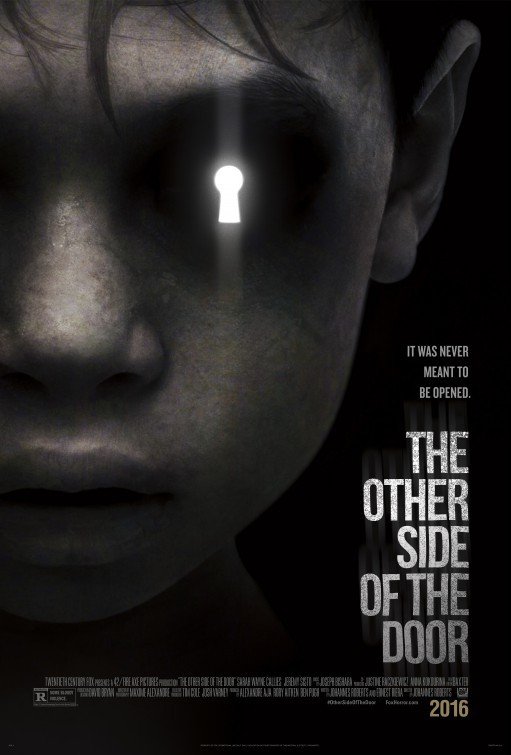 In THE OTHER SIDE OF THE DOOR, a young married American couple, Maria and Michael, move to India after they find out that they're having a baby. Six years later they are grieving the loss of their firstborn son, Oliver, after he drowns. Housekeeper Piki tells Maria about an ancient temple where she can communicate with her son's spirit through a door, allowing her to say a final goodbye. However, Maria’s not allowed to open the door once. Maria has problems following these simple instructions, and her son's ghost follows her home to torment the family.

This movie could be considered a lightweight of its genre. It offers the usual platter of scares and creepy ghosts. Only a skeletal overview of evil is given, leaving viewers to guess what’s happening. The whole movie is centered on the occult and Hindu beliefs regarding reincarnation. There are a couple brief references to Heaven. Most of the blood and gore is reserved for the final 15 minutes, but it’s very violent. Despite having no foul language, THE OTHER SIDE OF THE DOOR is unacceptable entertainment.

(OOO, FRFRFR, B, C, VVV, S, DD, M) Very strong occult worldview with lots of false religion where story revolves around bringing dead spirits back to life, Indian tribesmen use the ashes of the dead to communicate with the underworld, evil spirit possession occurs in a couple of scenes, evil beings emerge from the underworld to terrorize people who hinder their mission, elements of the Hindu religion are shown in multiple scenes, women are seen wearing Bindis on their foreheads, an ancient temple is used in multiple scenes, temple has ancient religious carvings throughout, a woman performs a ritual at a Buddhist altar, prayer chants are made at the burning of dead bodies, Indian woman talks about reincarnation, a girl asks her mother if someone went to Heaven when they died; no foul language; some bloody violence and strong, scary violence includes a family is trapped in a car underwater, and it’s implied boy drowns, many jump-scares with people or evil spirits sneaking up on characters, a dead boy's casket is dug up, and his body burned, the rotting arm of a corpse is shown, a woman is shown below the surface of water having drowned, pet fish and birds are shown dead, the head of a cow and a dead raven are shown lying in the forest, a raven is shown being eaten alive by an evil spirit, a girl stabs her pet dog and kills it, a girl stabs her father, evil tribesmen hold down a bloody girl while performing a killing ritual, a woman is stabbed and killed, a husband shoves his wife to the ground to defend his child, a man fights with evil tribesmen; implied sex between a married couple; no nudity but a woman's naked back is shown while in bed with her husband; no alcohol use; woman overdoses on pills and nearly dies; and, wife keeps secrets from her husband about their dead son.

A young married couple, Maria and Michael, are in India gathering antiques for their business when Maria reveals she’s pregnant. Instead of heading home to the United States, they decide to stay in India permanently.

Fast forward six years later and the couple are in the painful process of grieving their dead son, Oliver, while caring for their 4-year-old, Lucy. Maria is plagued with unexplained, disturbing dreams, each of which end with some sort of demonic spirit jolting her from sleep. Michael does his best to comfort Maria, but he doesn’t share in her guilt over Oliver’s death.

A flashback shows how Oliver died as he is trapped by his seatbelt in a car rapidly sinking into a river. With Lucy unconscious, Maria only has time to save one of her children, and is forced to leave Oliver behind.

Cutting back to the present, Maria expresses her unbearable sorrow to her husband. Though he offers comfort and encouragement, he comes home that night to find Maria near death after she overdosed on a bottle of pills. Doctors save her life, but their housekeeper, Piki, is sympathetic after losing her own young daughter recently. She shares a secret with Maria about an ancient Hindu temple where Maria can take Oliver’s ashes, and it will bring his spirit back, allowing her to say a final goodbye through the temple door. There is one concession: she’s not to open door, no matter how much Oliver begs to see her.

Of course, Maria opens the door and leaves it wide open for the ghostly spirit of her dead son to follow her home. He first reveals himself to his sister, then Maria discovers his return. Both decide to keep it a secret from Michael, which isn’t too difficult as he spends most of his time away from home working.

Little by little, Oliver’s spirit turns more violent, causing death to take hold of all vegetation and animals on the property. Eventually, he turns to tormenting Piki and then takes possession of Lucy. Maria and Michael must fight back against the evil underworld forces in order to save what’s left of their family.

This movie could be considered a lightweight of its genre. It offers the usual platter of scares and creepy ghosts. Those more familiar with horror might even call the plot predictable, though much goes unexplained. Only a skeleton overview of the evil is given, leaving viewers mostly in the dark about what’s happening.

As things rapidly start to unfold toward the end, confusion sets in about this foreign supernatural realm, and the sense of ‘just go with it’ comes to mind. One bothersome plot point overlooked by the filmmakers is that Michael appears completely oblivious to all the dead landscaping and dead animals on his property, not once even acknowledging it. Thus, he stays conveniently in the dark about everything until the last possible moment.

The whole movie is centered on the occult and Hindu beliefs regarding reincarnation. Indian tribesmen coated in war paint stalk Maria wherever she goes, apparently connected to the ghosts of the underworld. There are a couple of brief references to Heaven when Lucy asks whether her brother has gone there. Maria can only answer her daughter with, “I think so.”

Most of the blood and gore is reserved for the movie’s final 15 minutes, but it’s very violent and includes a child killing her pet dog and trying to kill her father. One upside is that the movie refrains from using language, but the occult worldview in THE OTHER SIDE OF THE DOOR is unacceptable entertainment.