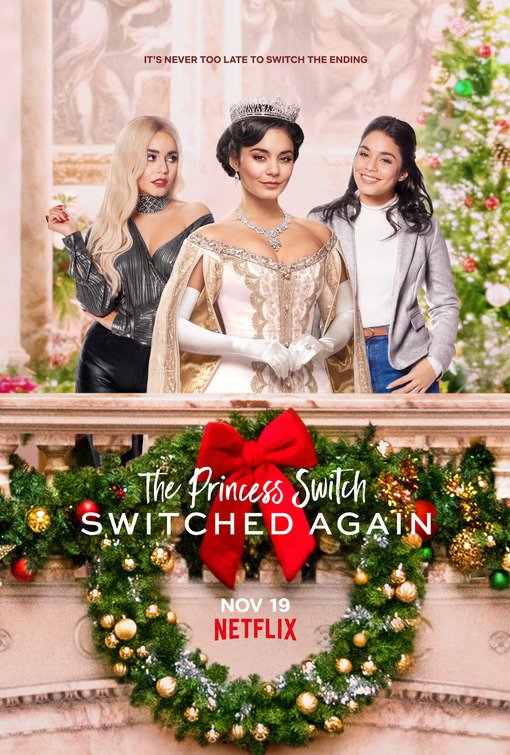 In THE PRINCESS SWITCH:  SWITCHED AGAIN, Duchess Margaret of Montenaro is scheduled to be crowned Queen on Christmas Day. Margaret’s lookalike, Princess Stacy of Belgravia, urges her friend, Kevin, to attend the coronation ceremony and try to work things out with Margaret, although they broke up six months ago. However, once in Montenaro, it proves difficult for Kevin and Margaret to get together. So, Stacy proposes another brief switch so her friends can have some time alone. Margaret’s snarky, conniving cousin, Fiona, throws a big monkey wrench into that plan.

THE PRINCESS SWITCH:  SWITCHED AGAIN takes time to get started. The comedy and jeopardy kick in when Stacy and Margaret switch places and when Margaret’s greedy cousin mistakenly kidnaps Stacy thinking she’s Margaret. Moreover, the second half contains overt Christian, biblical references, including: a choir sings about Jesus Christ the Savior, and references to Jesus Christ’s teaching on marriage in Matthew 19 and to King Solomon’s coronation in the Hebrew Scriptures. THE PRINCESS SWITCH:  SWITCHED AGAIN is an excellent, entertaining representation of Christian, biblical values for families during the Christmas season.

(CCC, BBB, PP, L, V, N, A, M):
Dominant Worldview and Other Worldview Content/Elements:
Very strong Christian, biblical, moral worldview includes a reference to what Jesus says about marriage in Matthew 19:1-12, scenes in a church, positive examples of clergymen, a choir sings the beginning to “God Rest Ye Merry Gentlemen” referring to Christ the Savior who saves us all from Satan’s power, a coronation scene showing that a monarch derives his/her power from God and is supposed to serve the people, references to King Solomon and Nathan the Prophet and Zardok the Priest from the Hebrew Scriptures, a couple scenes extol marriage
Foul Language:
One “h” word and two light profanities (for example, a priest says Dear Lord when informed of some upsetting news)
Violence:
Kidnap victim is knocked out with chloroform, kidnap victim is stuffed into a trunk to hide her somewhere else, a few pratfalls, kidnap victim is locked up, a man is knocked unconscious, and then another man gives him a karate chop on the neck
Sex:
No sex
Nudity:
Brief upper male nudity in one scene
Alcohol Use:
Brief alcohol use, but mostly implied and in the background
Smoking and/or Drug Use and Abuse:
No smoking or drugs; and,
Miscellaneous Immorality:
Greedy villains steal, deceive and even kidnap a person to achieve their ends, but they are foiled, and a male henchman is a bit effeminate, and two men are shown dancing at a Christmas ball in one image.

In THE PRINCESS SWITCH: SWITCHED AGAIN, Stacy tries to help her friend, Kevin, get back together with Margaret, who’s about to be crowned Queen of Montenaro, but Margaret’s greedy, conniving cousin, Fiona, throws a monkey wrench into Stacy’s plans. Streaming on Netflix, THE PRINCESS SWITCH: SWITCHED AGAIN takes a while to get started, but the movie’s second half is funny, with some good jeopardy, and has an uplifting ending with strong, overt Christian, biblical elements.

The movie opens with Stacy briefly explaining that Margaret, the Duchess of Montenaro, is about to be crowned Queen because the King has died, and her closest male relative has decided he doesn’t want the job. Stacy is actually Margaret’s double, and, in the first movie they had switched places, and Stacy fell in love with Prince Edward of Belgravia, and they married. Meanwhile, Stacy’s widowed friend, Kevin, had fallen for Duchess Margaret.

As the sequel opens, however, it’s been six months since Kevin and Margaret had split up, much to the chagrin of Kevin’s daughter, Olivia. Now, Margaret is about to be crowned Queen of Montenaro because the king has died, and she’s the next one in line for the throne. Kevin thought he had declined Margaret’s invitation to attend the coronation ceremony, but Olivia made sure his RSVP didn’t get mailed.

Olivia and Stacy urge Kevin to attend the coronation ceremony on Christmas Day and try to work things out with Margaret. If you don’t try, you’ll regret it, Stacy points out to Kevin, so he reluctantly agrees.

Once in Montenaro, however, it proves difficult for Kevin and Margaret to get together. Also, Tony, Margaret’s financial advisor for the country’s finances, keeps intruding, because it’s clear he’s also interested in Margaret.

Stacy convinces Margaret to switch places again for one short day so that Margaret can have some alone time with Kevin to work out their differences. However, Margaret’s snarky, conniving blonde cousin, Fiona, throws a monkey wrench into that plan. Fiona’s actions result in some unexpected complications that even impact Stacy’s marriage to Prince Edward.

Of course, the switched identities plot of SWITCHED AGAIN is pretty improbable, but that’s okay, because viewers aren’t supposed to take it seriously anyway. They’re meant to have fun with the plot. That said, the movie takes a bit to get started. The real jeopardy doesn’t kick in until Stacy and Margaret switch places, and Margaret’s cousin, Fiona, decides to kidnap Margaret so she can steal some of the country’s money and hightail it to an extradition-free country in tropical climes with her two best friends. Once this happens, however, the movie kicks the comedy and jeopardy up a couple notches. As a result, the movie’s second half is funny and suspenseful, with a couple twists that increase the stakes.

Even better, the second half contains some overt Christian, biblical references. For example, the coronation ceremony is supposed to take place in the big Christian cathedral in the capitol, complete with church trappings and priests. Here, the movie reflects the traditional Christian concept of monarchy throughout history, where the King or Queen rules only under the authority of God, and where the King or Queen are considered servants of the people rather than vice versa. This part of the movie is very inspiring and well done. Also, a priest performs a quick marriage ceremony in the movie’s second half and makes a direct reference to what Jesus says about marriage in Chapter 19 of Matthew. The movie also takes place during Christmas time. It includes a couple great lines from the wonderful Christmas carol, “God Rest Ye Merry Gentlemen,” referring to Jesus Christ as our Savior.

All and all, therefore, THE PRINCESS SWITCH: SWITCHED AGAIN is an excellent, entertaining representation of Christian, biblical values for families during Christmas season.