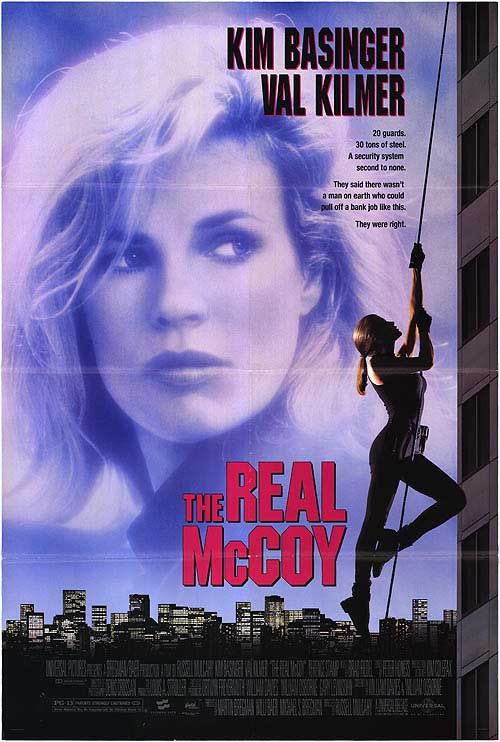 THE REAL McCOY renders an improbable plot with inconsistent characterization and comic overtones as ex-convict Karen McCoy outsmarts crooks at their own game and beats a system supposedly stacked against ex-cons. THE REAL McCOY is definitely one to be avoided because of its immoral messages that crime pays and that stealing is okay so long as you steal from crooks.

In THE REAL McCOY, Karen McCoy (Kim Basinger) catapults incognito down an elevator shaft and onto the screen to rob an Atlanta bank singlehandedly. The scene swiftly shifts to the Athens, Georgia, correctional facility where this beautiful, if unlikely, electronics and computer genius is being released from six years “inside.” Karen wants to be reunited with her young son, now in the custody of her ex-husband, so she cooperates with a corrupt parole officer. She soon learns that her paunchy used-car salesman ex-husband has double-crossed her by telling her son that she is dead. The rest of the movie revolves around Karen’s revenge against her husband and against Jack Schmidt (Terence Stamp), whom she blames for her penal stay. In the finale, she rescues her son, flushes her ex-husband (or part of him) down the airport toilet and escapes to Rio with a bag full of money.

THE REAL McCOY renders an improbable plot with inconsistent characterization and comic overtones. The acting talents of the film’s stars are hardly utilized or tested by the shallow, confusing script. The prevailing ideas are that revenge makes one feel good and that crime pays and can even be justified. The film is neither real nor substantial. It is to be avoided because of its immoral messages that crime pays and that stealing is okay so long as you steal from crooks.