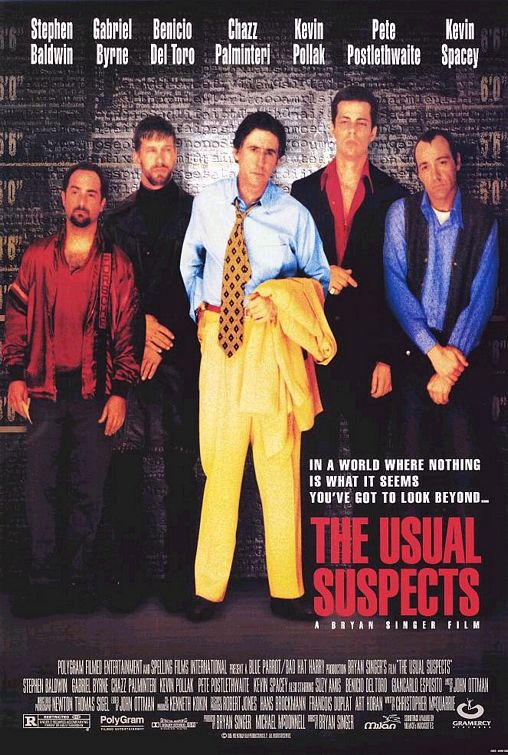 Intricately plotted and stylishly presented, THE USUAL SUSPECTS is the compelling story of five felons blackmailed into pulling a heist for a shadowy crime lord some believe to be the Devil himself. This film has an engaging, if not sympathetic, group of principles entwined in an expertly-crafted crime film full of entertain twists and reversals -- and extremely foul language and violence.

(H, C, Ab, LLL, VV, SS, A, M) Humanistic worldview with some discussion of Christian themes; 94 obscenities, 25 vulgarities & 4 profanities; lots of shooting & some blood with most deaths occurring off camera; one scene of implied rape; alcohol use; and, smoking

Intricately plotted and stylishly presented, THE USUAL SUSPECTS is the compelling story of five felons blackmailed into pulling a heist for a shadowy crime lord. The story begins in Southern California, where a boat believed to carry $91 million dollars in cocaine explodes in the dead of night. By morning, all that remains are 27 bodies, a lot of questions and only two apparent survivors. One tells a hard nosed U.S. Customs Special Agent how he and four partners — the other suspects — were manipulated onto that boat. He states that they were in service to a crime lord thought by many to be Satan himself. However, the agent is not buying the testimony. He thinks the crime lord is a cover identity for someone very accessible. The remaining story entails an attempt to gain the real identity of the crime lord.

Morally, the film is less “Good vs. Evil” than “Evil vs. Itself.” The protagonists are felons and cops, good and bad. Their lifestyles have far more serious consequences than a prison term: crime might pay up front, but their sinful lifestyles take their toll. Full of entertaining twists, reversals, extremely foul language, and violence, THE USUAL SUSPECTS is a well-crafted crime film, sure to entertain some and offend many.