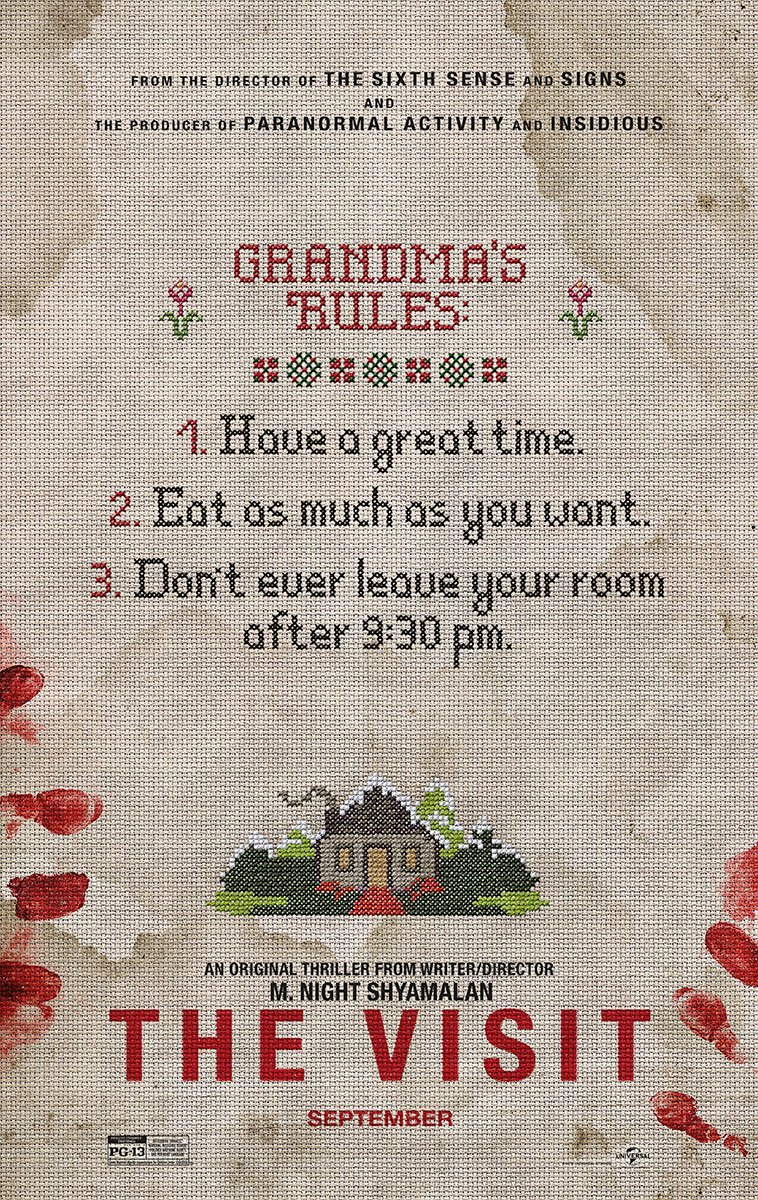 THE VISIT is a new scary thriller from M. Night Shyamalan, the writer/director behind the popular Movieguide® Award-winning movie SIGNS. The story follows a young teenager named Becca and her younger brother, Tyler. Becca volunteers to go visit her mom’s parents for the first time, along with Tyler, so their divorced mother can enjoy a getaway cruise with her boyfriend and hopefully come back engaged. Becca and Tyler’s visit starts pleasantly enough, even though the grandparents are extremely out-of-touch with modern society and technology. However, as the days – and especially nights – go by, they realize that Nana and Pop Pop are prone to extremely strange behavior after 9:30 p.m.

THE VISIT is a return to form for M. Night Shyamalan. It keeps viewers on the edge of their seats. It’s also inventive and even visually stunning. THE VISIT has a light redemptive, moral ending about the importance of family and forgiveness. The plot about strange, scary grandparents is resolved positively. However, there’s some extreme scary violence (especially at the end), brief foul language and other disturbing content. So, extreme caution is advised.

(C, B, O, LL, VVV, N, MM) Light redemptive, moral worldview promoting family forgiveness in a scary atmosphere, but children’s grandparents appear to be mentally disturbed and suffering some kind of dementia though there’s a twist at the end that resolves this immoral plot problem, plus some suggestion of occult happenings but that turns out not to be the case; eight obscenities (including one “f” word), one or two GDs and five light profanities used during extremely scary moments, plus a scatological scene involving adult diaper; extreme violence with blood at the end involves stabbing a villain in self-defense at close range, and another villain’s head is smashed repeatedly in self-defense with a refrigerator door, plus strong scary violence includes a split-second shot of a woman’s body hanging from a noose in the distance, a man is caught with a shotgun in his mouth and then pretends he wasn’t doing anything when he’s caught, man believes innocent man is watching and following him so he knocks the man down and punches him several times, woman is seen throughout the movie running or crawling through her house at high speeds, children are terrified and in peril several times, two corpses are found hidden in a basement; no sex but brief innuendo in one line of a rap song; elderly woman is seen with one half of her bare buttocks exposed when she crawls out from under a house after playing a terrifying game of hide and seek with two children and elderly woman is later seen fully naked from behind while making terrible and strange noises in the middle of the night; and, deception and particularly scary shots of woman jumping at a camera with a maniacal look on her face.

THE VISIT is a scary thriller packed with unexpected comical moments about a teenage girl and her younger brother spending a week visiting the very strange grandparents they never knew before, who aren’t who they claim to be. THE VISIT is very well done and has a light redemptive, moral worldview about the importance of family and forgiveness, but there’s some extreme scary violence, brief foul language and other disturbing content.

The story follows Becca (Olivia DeJonge), a girl in her early teenage years who volunteers to go visit her mom’s parents for the first time, along with her younger brother Tyler (Ed Oxenbould), so that their mother (Kathryn Hahn) can enjoy a getaway cruise with her boyfriend and hopefully come back engaged. The children’s father had left their mom for another woman several years ago, causing deep emotional trauma for the children that the movie reveals in pieces throughout in a plot where they finally learn to deal with the issue in a healthy way.

Becca is shooting the weeklong visit with Nana (Deanna Dunagan) and Pop Pop (Peter McRobbie) as a homemade video documentary gift for her mom, and the movie is shown through the camera’s point of view. This approach of “found footage” has been overused in the past 15 years, but here Writer-Director M. Night Shyamalan finds countless inventive, visually stunning ways to employ the tactic to expert effect.

THE VISIT starts pleasantly enough, though the grandparents are extremely out-of-touch with modern society and technology. However, as the days – and especially nights – go by, Becca and Tyler realize that Nana and Pop Pop are prone to extremely strange behavior after 9:30 p.m. each night. Despite being warned not to leave their rooms after that time, they start investigating the strange noises around the house. The movie has an ingenious balance of scares and laughs throughout, as the children and the audience are left to wonder if the grandparents are just odd, or flat-out dangerous, and why they act in such a strange fashion.

THE VISIT is a great return to form for Shyamalan, who was being hailed as the new Hitchcock-meets-Spielberg after his early run of successes (THE SIXTH SENSE, UNBREAKABLE and SIGNS) before he tumbled into one of the worst career losing streaks in modern times. The new movie constantly keeps viewers on the edge of their seats, wondering if the children are in danger, then how much danger, then how the children will get out of that danger.

Besides some brief foul language, the big problem with the movie is in its climax, which occurs during a shocking twist, as is usual with the best of Shyamalan’s thrillers. During the climax, the children are in so much peril that they’re forced to find unpleasant, violent ways out of the danger. Consequently, the movie almost loses viewer sympathy before coming back strongly with a beautiful epilogue where the children’s mother comes to terms with the sad end she had to her relationship with her parents 15 years before, and this inspires the daughter to also forgive her father. This message of family and forgiveness adds a powerful and valuable asset to THE VISIT, despite its more edgy qualities. That said, extreme caution is still advised.