"Dramatic Retelling of a True Story" 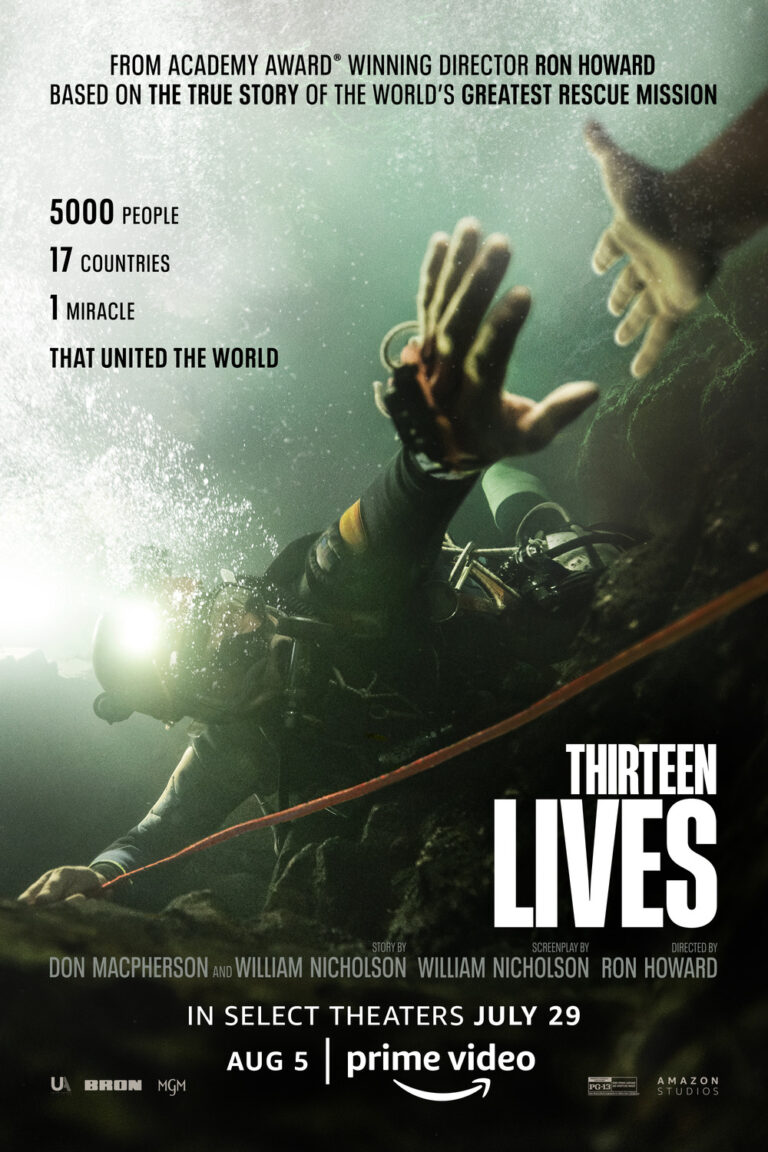 THIRTEEN LIVES is an intense drama, retelling the true story of the Thai soccer team stranded in a flooded cave in 2018. With 13 lives on the line, the world comes to their rescue. Two professional cave divers from England and Canada devise an ambitious yet dangerous plan to rescue the boys and their coach. Although divers commit to their plan, viewers wonder if their efforts can save the team.

THIRTEEN LIVES tells a riveting story of rescue. Using realistic, claustrophobic sets and lots of water, it brings viewers into the flooded cave with the divers, allowing them to experience the jeopardy, fear and struggle that went into this miraculous rescue. The actors realistically portray these unexpected heroes. The movie runs a little long, but each scene provided new details and insights, telling an on-the-edge-of-your-seat story. THIRTEEN LIVES has a light moral, redemptive worldview that values sacrifice, helping others and working together. However, it’s marred by a strong Buddhist content where characters perform rituals at a shrine, discuss appeasing spirits and are blessed by a Buddhist monk. Because of this, MOVIEGUIDE® advises extreme caution.

(B, C, FRFR, L, VV, N, A, D, M):
Dominant Worldview and Other Worldview Content/Elements:
Light moral, redemptive worldview that values sacrifice, helping others and working together, marred by strong Eastern religious references, including rituals at a Buddhist shrine, rituals to appease spirits and Buddhist monks bless bracelets
Foul Language:
Two “s” words, one “h” word and one strong JC profanity
Violence:
Intense scenes of divers in tight caves, some blood from scrapes, needles used for anesthesia
Sex:
No sex
Nudity:
Upper male nudity when a man sits on a bed in his underwear
Alcohol Use:
Characters drink beer in celebration
Smoking and/or Drug Use and Abuse:
A man smokes a cigarette throughout movie; and,
Miscellaneous Immorality:
One instance of lying, but it is condemned.

THIRTEEN LIVES is a drama about the Thai soccer team that was stuck in a cave with their coach in 2018 and the divers who saved their lives. Directed by Ron Howard, THIRTEEN LIVES tells a riveting story of rescue, but the movie is a little long and is marred by many references to Buddhist prayers and rituals to appease false spirits and gods.

The movie opens as a youth Thai soccer team finishes practice for the day. Before they go to a birthday party, the boys venture into a cave with their coach. The monsoon rains suddenly begin, and soon the team finds themselves stranded in the cave with no escape.

After their concerned parents discover that the boys are trapped, they call the local authorities, and the story spreads around the world. Soon, the Thai Navy SEALS and other rescue teams arrive, and the community sets up an encampment around the mountain. Meanwhile, in England, John Volanthen, a cave diver, calls up his friend, Rick Stanton, another expert cave diver, to gauge his interest in going to Thailand to help with rescue efforts. While hesitant at first, Rick agrees, and the two men head for Thailand to see how they can help.

When they arrive, they witness community members offering sacrifices at the shrine at the cave entrance to appease the mountain spirit. Meanwhile, a water engineer finds a way to divert the monsoon rains off the mountain and into some farmer’’fields, which they give up to rescue the boys. Eventually, the rains break, and the Thai community gathers to perform rituals at the shrine. They pray to appease the spirits, and a Buddhist monk blesses bracelets made by one of the boys’ mothers.

Soon, John and Rick swim into the cave, and after over six hours, they discover the team. The boys explain that their coach taught them how to meditate and pray to distract them from their current situation. Rick and John devise a plan to get the boys out of the cave, but all 13 must be anesthetized and swum out by divers. However, another cave diving friend, Harry Harris, an anesthesiologist, immediately quashes Rick and John’s plan because of the high risk of death.

Can John and Rick overcome Harry’s objections and change his mind?

Directed by Ron Howard, THIRTEEN LIVES tells a riveting story of rescue, with lots of jeopardy. It brings viewers into the story through true-to-life sets, stunts, the use of the Thai language native to the region, and lots of water. Though it runs a little long, the characters are engaging, and the action will drive viewers to the edge of their seats.

THIRTEEN LIVES has a light moral, redemptive worldview that promotes sacrifice, helping others and the power of working together. However, it’s marred by strong Buddhist content and often portrays rituals, shrines, worship, and the need to appease spirits and gods. THIRTEEN LIVES also contains some three obscenities and one strong profanity. Because of this content and the movie’s intense jeopardy, MOVIEGUIDE® advises extreme caution.