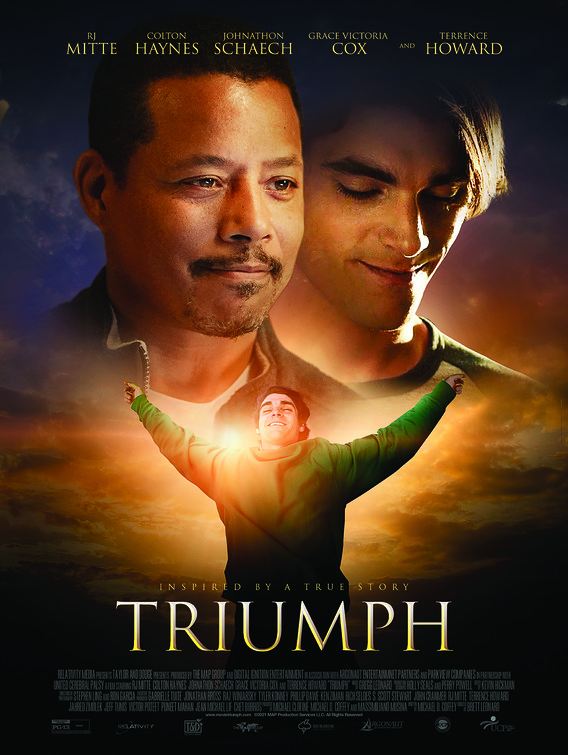 TRIUMPH is an inspiring sports drama about a high school senior with cerebral palsy affecting his left arm and leg and his speech. Mike Conley wants to join his new school’s wrestling team. Mike impresses the coach with his perseverance and hard work, but Mike fails to make the team. He agrees to become student manager for the team, however. Unexpectedly, Mike gets a chance to compete in some matches, but he loses every match. Then, his best friend, Jeff, the team’s star player, is injured in a fall. Can Mike help Jeff recover full use of his legs? Will Mike ever win a wrestling match?

TRIUMPH tells a stirring, morally uplifting story about perseverance, hard work, kindness, and sacrifice. The acting is uniformly excellent. TRIUMPH has a strong moral worldview, with some redemptive content. There’s also a positive reference to God knowing the future. This positive content is marred by some Romantic, humanist elements and comments promoting following your heart and self-determination. TRIUMPH also has some obscenities. Because of that, and the Romantic, humanist content, MOVIEGUIDE® advises caution for older children.

(BB, C, Ro, H, LL, V, M):
Dominant Worldview and Other Worldview Content/Elements:
Strong moral worldview with scenes of sacrifice, determination, team spirit, hard work, perseverance, forgiveness, not judging people about what things they can’t do but what they can do, and helping others, plus a comment that only God knows the specific plans He has for specific people and the use of their specific talents/gifts, slightly marred by light Romantic elements (including a mention of following your heart) and light humanist elements and comments about self-determination and will power (without mentioning the words “will power,” however)
Foul Language:
16 obscenities (including several “s” words [father rebukes young boy’s use of the “s” word when boy falls down trying to ride a two-wheel bicycle], more than several “h” words, two “ah” words, several a** words), one light MG profanity, and teenage boy gives another boy an obscene gesture
Violence:
Several scenes of wrestling matches including one scene of two young boys wrestling, and boy with left arm and leg disabled somewhat but not entirely by cerebral palsy breaks his collar bone, and several scenes of high school boys wrestling in matches, including the boy disabled by cerebral palsy, who usually but not always struggles not to lose, father slaps teenage boy on face in one scene, and teenage boy shoves him onto couch (father jokingly asks why son didn’t use that move during his wrestling match to relieve the tension between them), and teenage boy falls during rope climbing incident and must recover the use of his legs through therapy, with help from his friend who has cerebral palsy and knows about physically working to recover from and cope with a physical disability
Sex:
No sex, just some light mentions of being attracted to girls, and lead character is interested in a girl at his new high school, and they eat lunch together one time and go out on a date, and teenagers dance at a school dance, and teenage boys and girls are shown holding hands once or twice
Nudity:
Upper male nudity in natural settings, such as teenage boy practices asking a girl out in the mirror while getting ready for school or after a shower
Alcohol Use:
No alcohol use
Smoking and/or Drug Use and Abuse:
No smoking or drugs; and,
Miscellaneous Immorality:
Two or three high school age teenagers mock one boy’s cerebral palsy disabilities several times, but it’s clearly rebuked, and boy eventually earns their respect and kindness.

TRIUMPH is an inspiring sports drama about a high school senior with a case of cerebral palsy affecting his left arm and leg who wants to become a respected member of his school’s wrestling team. TRIUMPH tells a stirring, morally uplifting story about perseverance, hard work, kindness, and sacrifice, with excellent performances and a reference to only God knowing what the future holds, but it’s marred by some obscenities and Romantic, humanist philosophy, so caution is advised.

Inspired by the screenwriter, Michael D. Coffey’s, true story, the movie opens in 1975 with an 8-year-old boy with cerebral palsy named Mike Conley competing in a wrestling match. Mike’s cerebral palsy affects his left arm and leg, and his speech. However, he has lots of spirit and determination. Sadly, though, he breaks his collar bone during the match, and his father rushes Mike the hospital.

Ten years later, Mike has transferred from a high school in Kansas to a Texas high school called Hillsboro. At first, the counselors think Mike’s disability affects his mental abilities. They try putting him into special ed, but Mike goes to the principal and convinces him he can do the work.

As a senior, Mike gets a choice of physical education classes, and he picks weightlifting because he wants to try out for the wrestling team. Before classes start, he goes to the weight room to practice and meets Jeff, the varsity team’s best wrestler. Mike helps Jeff out when he has trouble lifting a standard, long barbell off his chest, and the two become fast friends.

The coach has doubts about Mike’s ability to join the wrestling team. So, he challenges Mike to do three difficult leg pushes against some heavy weights. Mike struggles at first, but he has strong legs and surprises the coach by completing the exercise. However, when Mike tries out for the wrestling team, he loses a practice match to one boy, Troy, who’s been bullying and teasing Mike about his disability. So, Mile fails to make the team.

The coach has grown to admire and respect Mike, however. He offers Mike to join the team has a student manager, to help the coach demonstrate wrestling maneuvers and holds and make sure the team has enough supplies. Mike is reluctant at first, but he agrees.

Unexpectedly, Mike gets a chance to wrestle one boy from another high school when a team member doesn’t show up for the match. The other boy easily defeats Mike, but Mike keeps practicing. His father, however, warns Mike that, if he doesn’t keep his grades high, that’s the end of wrestling. Mike gets help from his friend, Jeff, though, who needs a wrestling scholarship in order to go to college.

One day, Mike and Jeff are training to keep fit. While climbing two ropes, Jeff falls and suffers trauma to his back and neck. Mike, however, won’t let Jeff quit, and he starts helping Jeff with his physical therapy. Meanwhile, Mike gets more opportunities to wrestle, but he keeps losing his matches.

Can Mike keep up his grades? Will Mike ever win a match? Will his friend, Jeff, regain full use of his legs? Will Mike win the heart of the girl he likes? The rest of the movie answers those questions.

TRIUMPH tells a stirring, heartfelt, morally uplifting story about perseverance, hard work, kindness, and sacrifice. RJ Mitte, who played Walter White’s disabled son on BREAKING BAD, does a great job as Mike, as do the other young actors. Also, Terrence Howard delivers his usual standout performance as the wrestling coach. TRIUMPH is an inspiring, entertaining gem that most viewers probably will enjoy.

TRIUMPH has a strong moral worldview, with some redemptive content. There’s also a positive reference to only God knowing the future. This positive content is marred, however, by some Romantic, humanist elements promoting following your heart and self-determination. TRIUMPH also has some obscenities. Because of that, and the Romantic, humanist elements and comments, MOVIEGUIDE® advises caution for older children.