"He Paid for All Our Sins" 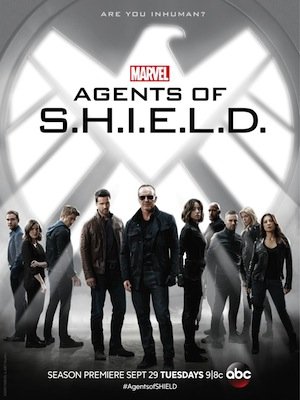 The last three episodes of Season Three of ABC’s MARVEL AGENTS OF S.H.I.EL.D., EMANCIPATION, ABSOLUTION and ASCENSION, play like a redemptive, riveting action movie. The agents are trying to defeat a demonic alien called Hive who’s taken over the body of their former nemesis. Hive wants to unleash a pathogen that will let him control the minds and souls of all people on Earth. Eventually, a hero must pay for everyone’s sins by sacrificing his own life.

Taken together, these three AGENTS OF S.H.I.EL.D. episodes are among the best episodic television ever made. The scripts are extremely exciting, with many twists and turns. They are also full of very funny lines. Even better, the direction and acting pack a terrific emotional punch that had MOVIEGUIDE®’s reviewers in tears several times. EMANCIPATION, ABSOLUTION and ASCENSION deliver a powerful Christian allegory. Faith, love, hope, and sacrifice are all extolled using the symbol of a Christian crucifix. Also, revenge is overtly rebuked. Each of the episodes, however, has a few light obscenities and lots of action violence. So, caution is advised for younger children.

EMANCIPATION, ABSOLUTION and ASCENSION, the last three episodes of Season Three of ABC’s MARVEL AGENTS OF S.H.I.EL.D., play like a redemptive action movie about good versus absolute evil. In fact, these three episodes may be the best thing Marvel has ever done, in both movies and television. Best of all, the three episodes are linked together by a Christian allegory focused on a Cross necklace that passes among various heroes in the three episodes.

The villain in these episodes is an alien named Hive. Sometimes called the Devil, Hive has the ability to take over the minds of humans with special powers, which the series calls Inhumans. Hive has taken over the body of the previous season’s villain, a man named Ward because the new director of SHIELD, Agent Phil Coulson, killed Ward out of revenge. The alien creature is called Hive because inside him live a multitude of people and beings. Hive has taken over the brain and the will of one of the top agents of Shield, an Inhuman named Daisy, who can hack into any computer anywhere and who has tremendous telekinetic powers that can also cause windstorms and earthquakes.

In EMANCIPATION, Daisy’s in secret communication with the one she loves, an Inhuman named Lincoln, who’s being detained by SHIELD after having been controlled by Hive and being rescued. Under Hive’s dastardly control, Daisy is trying to free Lincoln so he can join her and Hive.

Meanwhile, General Talbot comes to address Coulson about registering all Inhumans with the government to control the bad ones. Phil takes Talbot on a tour of Shield’s secret base, introducing him to some of the Inhuman agents with superpower skills. Each Inhuman seems design for a particular task.

Hive is using a British doctor to try to change humans into Inhumans. He’s draining Daisy of her blood for a special DNA code. He plans to design a bomb to bring about Armageddon by equipping a nuclear warhead with the DNA change agent and blowing it up over the Earth’s atmosphere. When the doctor tests his change agent, it’s not quite perfected and turns ordinary mortals into ugly zombie-like freaks, who have a much lower IQ but still have the inner talents and skills they gained in their lifetime.

Hive wants Lincoln sent to him so he can achieve his goals, but Phil and the team send a converted Inhuman named Lash, who used to be a psychiatrist, to destroy Hive. However, Lash’s purpose is something different than destroying Hive, and much more beneficial.

There are several clear references to faith in this episode. The entire episode has a faith component. Hive is often called the Devil, people seem to have had a designer who designed them for a purpose, and one of the agents gives her fellow agent a cross and says, “keep the faith” This message ties into the next episode, which is called ABSOLUTION.

In ABSOLUTION, Daisy has escaped Hive after Lash freed her from Hive’s mind control but was killed by Hive. Back at SHIELD’s secret base, Coulson is having Daisy subjected to a thorough evaluation to see whether she’s really free from Hive’s spell. However, Daisy has built up a tremendous sense of guilt over the terrible things she did while under Hive’s control.

Meanwhile, Hive has acquired a nuclear missile to use for his weapon to turn all the human race into inhumans whom Hive can control. However, the SHIELD agents manage to infiltrate the missile base and disable the missile. Even so, Hive and his cohorts are able to spirit away the missile’s warhead.

The cross necklace again is major element in the program. At one point, one human agent nicknamed Mac wants to give the Cross back, but the faithful female agent, Yoyo, says the Cross isn’t a rabbit’s foot, but a symbol of faith. When Mac says he’s still not sure if SHIELD can stop Hive, she encourages him to vanquish the darkness with the light.

In the final episode of Season Three, ASCENSION, Hive has infiltrated the SHIELD base and changed several human agents into inhumans. He wants to take the big experimental jet into space to explode the bomb carrying his mutant change agent. The episode is basically a race against time to stop Hive.

Eventually Lincoln, who’s mortally wounded, takes the place of Daisy at the controls of the aircraft and is determined to sacrifice his life, to save Daisy, SHIELD and all mankind, while killing Hive. Although Hive is the devil, he constantly says he wants to unite people. Of course, even the Devil thinks he’s doing good, but his values are warped. In fact, Lincoln reminds Hive that he’s only uniting people because he’s trying to totally control their minds.

The third and final episode of Season Three not only has a strong message of faith. It also has a strong allegorical current of self-sacrifice, reflecting the biblical story of Jesus dying on the cross for our sins, Here again, the Cross necklace is a major symbol in the episode. Also, at the end, when Daisy says Lincoln paid for her “mistakes,” Coulson tells her he paid “for all of our mistakes.”

Taken together, these three episodes are among the best episodic television being made today. They are extremely exciting, with many suspenseful twists and turns. They are also full of some very funny lines. All of this is, of course, an example of brilliant writing. Even better, the direction and acting step up to the challenge. In fact, they sometimes pack such a terrific emotional punch that had MOVIEGUIDE®’s reviewers in tears more than a few times.

EMANCIPATION, ABSOLUTION and ASCENSION deliver a powerful Christian allegory with profound meaning. Faith, love, hope, and sacrifice are all extolled in many poignant ways: while revenge, greed and manipulation are all shunned.

Each of the episodes has a few light obscenities and lots of action violence, so caution is advised for younger children. There is little other objectionable content, however.

AGENTS OF S.H.I.E.L.D. has become one of the more redemptive programs you can find on television. Of course, as usual, some of the episodes are more wholesome than others. Of course, there’s always a chance the producers may foul things up eventually in future episodes. So, parents should always ask MOVIEGUIDE(r) about the episodes before they let their children or teenagers watch them.