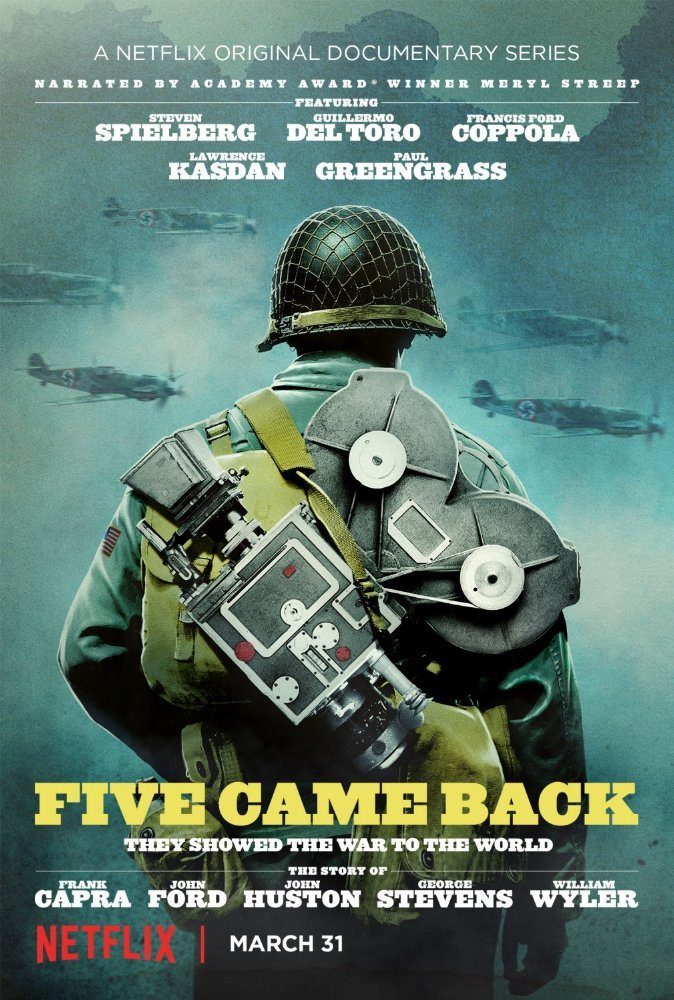 The three-part Netflix docuseries FIVE CAME BACK follows the true story of five extraordinary filmmakers:  Frank Capra, John Ford, William Wyler, George Stevens, and John Huston. They risked their lives and Hollywood careers to enlist in World War II. The series is based on the 2015 book FIVE CAME BACK by Mark Harris, who also wrote the show’s script. The five men went on to make patriotic documentaries about the war. Modern day movie directors, including Steven Spielberg, Lawrence Kasdan and Francis Ford Coppola, pay homage to these men with meaningful commentary.

FIVE CAME BACK is a masterful mix of interviews, movie clips, commentary, and voiceovers. It has a strong moral, biblical worldview, with a definite line between good and evil. The patriotic docuseries stresses that World War II was a fight for freedom and Western Civilization. Also, it depicts veterans as heroes. Finally, there are many Christian elements including praying, church scenes and a reliance on God in the midst of tough circumstances. Caution is advised for FIVE CAME BACK due to some foul language in each episode, war violence and disturbing images.

Content: Very strong moral, patriotic worldview exposing the evils of National Socialism in World War II, with some overt Christian references, including prayer and church scenes, and some references to hedonistic behavior and a Romantic element about believing in yourself; light foul language in each episode contains two to six obscenities and one or two profanities; strong war violence in each episode, sometimes including images of brutality; brief references to one man’s adulterous affairs; no nudity but brief images of cartoon women in underwear in short documentaries made for soldiers during World War II; some references to two men drinking to excess; some smoking; and, some brief miscellaneous immoral behavior.

The Netflix documentary series FIVE CAME BACK follows the true story of five extraordinary filmmakers – Frank Capra, John Ford, William Wyler, George Stevens, and John Huston – who risked their lives to enlist in World War II. The series is based on the 2015 book FIVE CAME BACK by Mark Harris, who also wrote the show’s script. Modern-day movie directors, including Steven Spielberg, Lawrence Kasdan and Francis Ford Coppola, pay homage to these men with meaningful commentary. Actress Meryl Streep lends her voice as the narrator.

While serving their time in the armed forces, Capra, Ford, Wyler, Stevens, and Huston shot behind-the-scenes footage of real battles to create war documentaries that brought to light what was truly happening at the front lines. In addition, the American government commissioned these five men to make propaganda films to influence soldiers and citizens that there was a reason to keep fighting for freedom. Each filmmaker had their own unique way of creating propaganda. For example, John Huston directed the movie ACROSS THE PACIFIC starring Humphrey Bogart as a way to make Americans aware of the threat of the Japanese by using adventure and drama. Frank Capra, however, made the WHY WE FIGHT series of five films using real live war footage combined with Disney animation.

John Huston was assigned to an Aleutian outpost where he filmed REPORT FROM THE ALEUTIANS, while William Wyler and John Ford were sent to England to create other war documentaries. After the success of his short documentary, THE BATTLE OF MIDWAY, Ford was commissioned to film the ALLIED INVASION OF NORMANDY which was the first transatlantic operation of the American troops in World War II. Meanwhile, George Stevens left his hit television show, MORE THE MERRIER, to join the forces in Cairo.

The docuseries shows filmmakers John Ford and George Stevens filming in the midst of the invasion of Normandy. There are hundreds of cameras and dozens of cameramen on the battlefield on D-Day. It was a devastating scene where more than 4,000 men died. In fact, the carnage sent Ford into a three-day drinking bender.

The series also captures the brutality of the Holocaust extermination camps. George Stevens and a filming crew came to the camp at Dachau, which was the first of Hitler’s concentration camps opened in Germany. There are hundreds of naked dead bodies lying upon each other on the dirt ground, including burned bodies and scattered body parts. George Stevens was on site when the Jewish prisoners were liberated. His footage is so horrifying that Stevens sent his documentary along as evidence to the government rather than showing it to the public. Only small pieces of Steven’s footage at Dachau are featured in the documentary.

Each of the five men were influenced by their war experiences to make great films. George Stevens made the compelling movie THE DIARY OF ANNE FRANK, based on the true story of a young Jewish girl in Nazi-occupied Holland during World War II. John Huston created the movie LET THERE BE LIGHT about psychologically damaged veterans suffering from what is now known as PTSD. Although the movie finished in 1946, it was censored for 35 years and wasn’t released to the public until 1981. Frank Capra’s toilsome years in the army gave him inspiration to write and direct the movie IT’S A WONDERFUL LIFE, which has become a beloved Christmas classic watched by millions of people across the world for 70 years.

FIVE CAME BACK is a masterful mix of interviews, movie clips, commentary, and voiceovers. The docuseries has a strong moral and biblical worldview. It shares details of the immense sacrifices that people made during World War II. There is a definite line between good and evil. This is a fight for freedom and the last chance to save Western Civilization.  The series is very patriotic and veterans are depicted as heroes. In addition, there are many Christian elements including praying, church scenes, and a reliance on God in the midst of tough circumstances. The series ends with a message of love, hope and perseverance. The program’s primary audience is history-loving teenagers and adults.

MOVIEGUIDE® advises caution for older children due to some brief foul language in each episode and lots of war violence. Clips of Jews in the Holocaust concentration camps and of people in the nuclear bomb attacks on Japan are particularly gruesome.