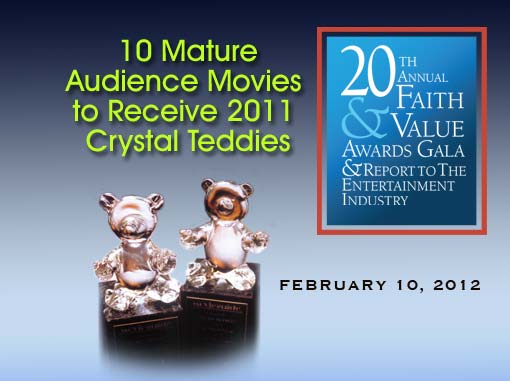 Fresh off its win at the Golden Globes, “The Artist” leads the pack of ten movies vying for the Best 2010 Movie for Mature Audiences, the executive producers of the 20th Annual Faith & Values Awards Gala and Report to the Entertainment Industry announced today.

The awards ceremony will be held Feb. 10 at the Universal Hilton Hotel in Universal City, Calif. in the heart of Hollywood.

“The Artist” – The Weinstein Co.

“Pirates of the Caribbean:  On Stranger Tides” – Walt Disney Company

“The Tree of Life” – Fox Searchlight

The 10 nominees for Best Family Movie of 2011 were announced last week.

Nominees for the two $100,000 Epiphany Prizes for Most Inspiring Movie & TV Program of 2011 will be announced next week, as will nominees for the $50,000 Kairos Prizes for Spiritually Uplifting Screenplays by First Time or Beginning Screenwriters, the Grace Awards for Most Inspiring Performances in Movies & TV, and the Faith & Freedom Awards for Promoting Positive American Values.

The winners will be announced Feb. 10 at the Faith & Values Awards Gala.